Following the 2018 final round at Valencia, a Moto2 press conference was held to shed further light on the Triumph 765 powered class for the 2019 season ahead of the Jerez test this weekend, discussing the engine, electronics and aims for the class in the new year.

Moto2 was born in 2010 and after nine seasons, 2019 heralds a new era, with the Triumph Moto2 765cc powered racer just around the corner.

“The engine is built to develop more power torque and revs, less inertia and is lighter weight. There are more than 80 new components. Our testing and development has had three major phases. Development work has been going on for two years; rig testing and a lot of track testing. We’ve done over two and a half thousands race pace laps at a range of circuits and much more than that on development rigs.

“We now have an engine that’s reliable, consistent and is producing 140 PS. So that’s a good step and a step for the championship but more than that you have completely different torque delivery with much more throughout the whole rev range. That’s the character of the triple and that’s what we think will make this so exciting.”

Next to speak was MotoGP Technical Director Corrado Cecchinelli, who delved more into the reasoning behind the change, a lot of which comes down to the technical content of the class and positioning Moto2 correctly between the lightweight class and the premier class.

“It’s an important step and I’m happy to be here for this exciting moment. Moto2 has been a success so far and for sure this series has some content we have to make sure we don’t lose like fair racing, a good show, and budget sensitivity. We have to be careful not to build a category where if a huge spender comes, he can win everything. So there are things to lose but a lot to gain.

“We expect some performance improvement but that’s not exactly the goal. We don’t have a problem with performance, what we’re looking for with this new engine is to take a step in terms of the technical content of Moto2. Ride-by-wire is what helps us really make a step because it introduces different concepts of torque management, for the first time staff and riders will learn in Moto2 that there’s a chance to make the engine do what you like.”

Corrado Cecchinelli further described the goal with torque maps and engine braking as being, “Something more than Moto3 but delivered in an easier format than MotoGP.”

Marco Venturi of Magneti Marelli was the next man on the mic, talking of the Moto2 Electronic Control System Kit

“This has been a big challenge for us because the request was to improve the level of technology and the technical level of Moto2. The knowledge on how to build it and what to select directly comes from our experience matured in MotoGP. We’ve tried to make the Moto2 closer to MotoGP, from the choice of the parts and the performance of the parts.

“We’ve worked on the system for more than a year, on the test bench on ExternPro premises and we made additional steps on bikes, working on bikes prepared for the occasion and following some tests for different chassis manufacturers. Some work on the running road, and finally some tests on track to make optimum calibrations. We are starting to use the system and we’ll see when it’s in the hands of the teams, I think it will improve their performance and knowledge of the bike and make Moto2 closer to MotoGP.”

Finally, Trevor Morris from ExternPro explained the new era had been a little while coming…

“We could see what we needed to go forward in Moto2, and the work we’ve been doing over the last few years… it started a few years ago when we wanted to find a replacement engine. The Honda engine served its purpose very well, but we knew we had to move forward. The Triumph engine was so easy to choose.”

Moto2 head out for their first Official Test of the new era from the 23rd to 25th November at Jerez. 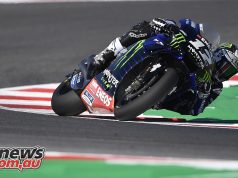