Aron Canet (Estrella Galicia 0,0) has taken a stunning second win of the season at the Motul TT Assen, striking at the final chicane to cross the line just ahead of fellow Championship challenger Romano Fenati (Marinelli Rivacold Snipers). After an incredible ride back through the field after a tough weekend, British Talent Team rider John McPhee completed the podium – making up 16 places from his grid position.

With the threat of rain but a dry track and slicks on the field, it was a great start for the three on the front row as Nakarin Atiratphuvapat (Honda Team Asia) took the hole shot – but lost it to Jorge Martin (Del Conca Gresini Moto3) on the exit of Turn 1, with the Spaniard then beginning to streak away at the front. Not for long, as home hero Bo Bendsneyder (Red Bull KTM Ajo) pulled clear of the chaos to hurt him down, followed by Championship leader Joan Mir (Leopard Racing). Next to get in the fight was Fenati, as the Italian attacked to tag onto the front three and the Moto3 fireworks began. 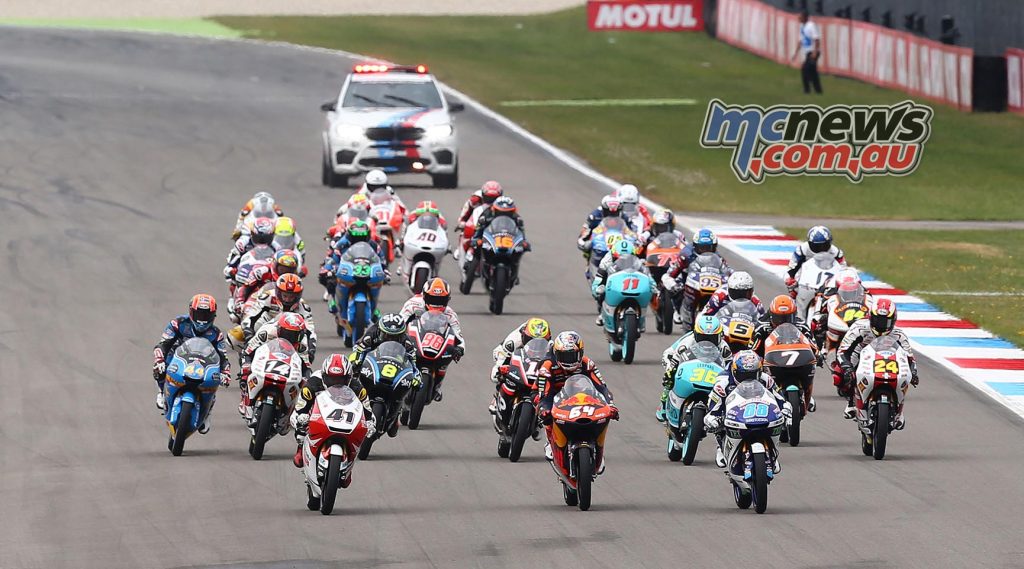 The lead group of six had then begun to settle into a rhythm, with Adam Norrodin (SIC Racing Team) and Tatsuki Suzuki (SIC58 Squadra Corse) joining the front four up in the battle. Martin then ran off track and dropped from the lead, pushing to get back in the group early on.

An early superstar to move up from outside the top twenty on the grid into seventh was Fabio Di Giannantonio (Del Conca Gresini Moto3), who then suffered a crash – rider ok – but with repercussions for those following as the chasing pack avoided the incident. The exception was some bad luck for Enea Bastianini (Estrella Galicia 0,0), who then suffered a fall and later retired. 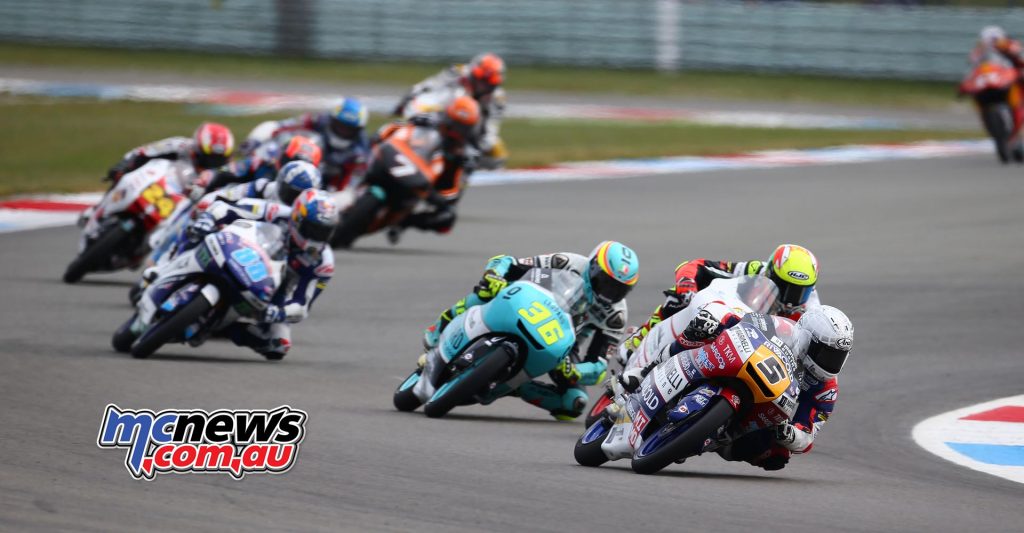 With the top six battling, eyes turned to Aron Canet as the Spaniard got his head down from the front of the second group and began to close the gap after getting caught out by the ‘Diggia’ incident – bringing Marcos Ramirez (Platinum Bay Real Estate), Jules Danilo (Marinelli Rivacold Snipers), Gabriel Rodrigo (RBA BOE Racing Team) and John McPhee along for the ride as the train at the front became eleven.

The stage was then set for a classic Moto3 battle, with some drama when Martin clipped Ramirez and dropped back in the lead group slightly – as McPhee and Mir dueled at the front with four to go.

The final lap dawned with Mir ahead over the line for the last 4.5km, but the ending was far from written. The Majorcan then lost out midway through and the pack streamed past, with the final few corners just on the right side of chaos as the group began to tousle for supremacy. Norrodin crashed out just ahead of the final chicane, before Canet moved through into the lead and held it over the line for his second win of the year – almost side by side with second place finisher Fenat in another incredible Moto3 crescendo.

MotoGP with Boris | Celebrating Mass at The Cathedral

MotoGP riders talk the Assen TT through their eyes

McPhee completed his scintillating comeback from P19 on the grid to lock out the podium and escape the chaos behind, with Martin taking fourth after slicing back through the lead group.

“After the weekend we’ve had I’m absolutely delighted to be on the podium, so happy for me and the team to pull this result out after such a tough weekend. The race was great fun – starting from nineteenth was quite difficult but we had the rhythm and the pace and we kept chipping away. I realised I was catching the second group and the second group were catching the leaders. So I kept on fighting away and with about five laps to go I thought I could even win the race and that we had a real good chance. I timed everything perfectly going into the last lap in Turn 9 and 10…I tried to pass Canet and then Canet and Mir ran wide, but to claim the last step on the podium I’m really happy.”

Jules Danilo took a career best finish in fifth ahead of Ramirez, with seventh place finisher Gabriel Rodrigo a protagonist of the final act in the drama.

Contact between the Argentine rider and home hero Bo Bendsneyder just ahead of the line saw heartbreak for the crowd as the Dutchman lost control and crashed – both Bendsneyder and the bike crossed the line in the top ten, but the rider was not in contact with his machine, meaning he isn’t classified.

Tatsuki Suzuki finished off his impressive weekend at Assen with an eighth place, ahead of the big name to lose out in the final corners – Championship leader Mir. Nicolo Bulega (Sky Racing Team VR46) crossed the line in a solid but lonely tenth place.

Now it’s a quick hop further south to the Sachsenring, where the grid will do it all again next Sunday ahead of the summer break.