MotoE to debut this weekend in Germany alongside MotoGP

The MotoGP paddock is on the way to Sachsenring in Germany for the HJC Helmets Motorrad Grand Prix Deutschland and a MotoGP event which has the honour of staging the very first FIM Enel MotoE World Cup Grand Prix during the weekend’s programme, alongside the usual Moto3, Moto2 and MotoGP races. MotoE will also race in Austria, San Marino and Valencia with two MotoE races to be held at those final two rounds.

This new category is just for electric motorcycles, with the single-make series featuring the ‘Energica Ego Corsa’. There are even limited set-up options to increase competition even further. Bikes must be used as delivered by the organiser, with no modifications except those described in the Technical Regulations.

The new competition takes to the track in a class that is designed to combine speed and sustainability, with all the motorcycles being identical. All the energy stored in the batteries that will power them will be produced from renewable resources. 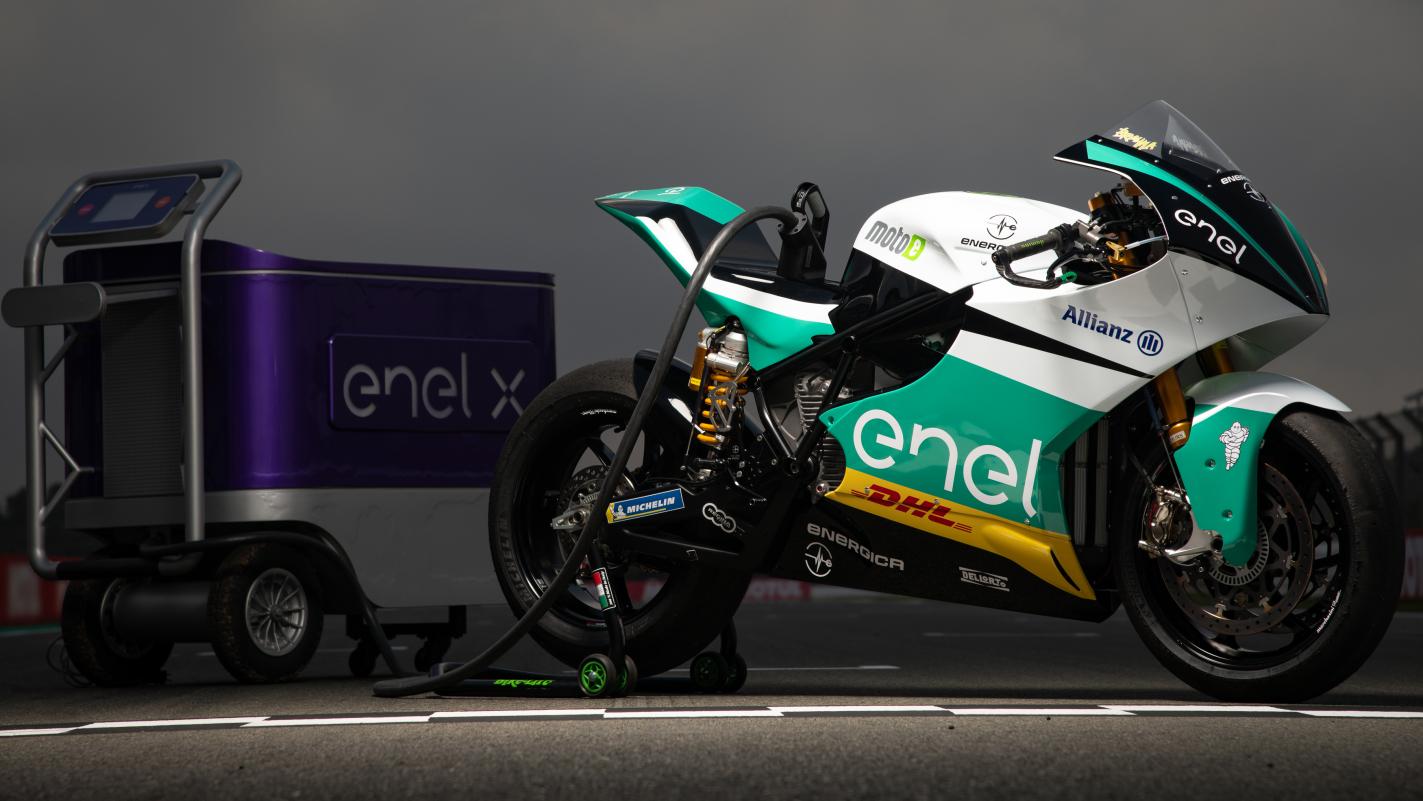 The MotoE class makes its first competitive outing under the glare of the motorcycling public at SachsenringDue to their limited range the MotoE category will not participate in a warm-up lap ahead of their race, and the E-Pole qualifying session sees riders head out individually for one fast lap to decide the starting grid. The 29-kilometre 8-lap race will be run on the shortest circuit on the MotoGP calendar at 1800 AEST on Sunday, immediately before the Moto3 (27 lap), Moto2 (28 lap) and 30-lap (110 km) MotoGP events.

Josh Hook is the only Australian in the class and will ride for Alma Pramac Racing. Unfortunately the reigning World Endurance Champion was ill with gastro at the most recent test session and thus has less seat time under him compared to his rivals in the fledgling class.

The Openbank Ángel Nieto Team are ready to take on the challenge with former 125cc World Champion Nico Terol and the only female on the grid María Herrera.

“I am excited about Germany, especially after the Valencia test a couple of weeks ago, which was very positive for us. After a long time out of racing I still have a good level and I am hoping to get the most out of every practice session and every race. Jorge Martínez “Aspar” and the Ángel Nieto Team have given me a great opportunity to race in a series with a big future and I am going to push hard and get 100% out of it. Sachsenring is a twisty track where corner speed is key, especially in the downhill sections, which is where the most time will be made on the MotoE bike.”

ONE Energy Racing fields Bradley Smith who arrives at the German track fit and optimistic about taking a great result.

Smith finished second on the combined timesheets for the official preseason test, held two weeks ago at the Ricardo Tormo Circuit in Valencia. The Brit also has extensive experience of Sachsenring, where he has competed 13 times with a best result of fourth place in the 2008 125cc race.

“I’m very excited about the start of the MotoE season. We have waited a long time, so I’m looking forward to getting the championship underway alongside One Energy Racing. It’s a very short competition, consisting of only four rounds and six races, and that means that it is very important to make each race count. Even though I was only able to attend one of the three days of testing at Valencia two weeks ago, I feel ready for the start of the season. We were amongst the fastest in testing, showing our speed. The three or four riders at the top are pretty close together, so it won’t be easy, but we want to start this campaign as well as possible and stake our claim for the title from the get-go. My intention in Germany is to finish on the podium. I expect a very close race at Saschenring, so the key to victory will be not making mistakes.”

The grid will be composed of 18 riders split up into 12 different Teams and there will be ten different nationalities lining up in the FIM Enel MotoE world cup.

Michelin have developed tyres specifically for the MotoE category, the tyres available for the inaugural race will be a medium front, which has been developed with similar characteristics to the existing MotoGP tyres, whilst the rear will be a soft compound and is a derivative of Michelin’s successful commercial-based Superbike tyre.

The German circuit was resurfaced in 2017 and is located in the eastern part of the country near the cities of Dresden and Leipzig, and despite the race being staged in mid-summer, it can have a tendency to be cold and damp in the area during that time of year.

“This is going to be a very busy weekend for all at Michelin as we have the very first MotoE race alongside the MotoGP. As far as MotoGP is concerned, we know the requirements of this track, it is short and is also one of the slowest of the year, but it places a huge amount of demands on the left-side of the tyre. We bring a specific compound to Germany to cope with this and also for the weather. It is one of the tracks where you never know what to expect and it changes quickly, so we need to make a range of tyres that work in all conditions. It will be very interesting to see the first MotoE race, we have done a lot of testing and developed a range of tyres specifically suited to these machines, so it is now time to see them used in the field of competition. Michelin is delighted to participate in this new challenge as a technology partner, as it has a history of choosing projects that will improve mobility and make it safer, more economical and more environmentally friendly for all, and we see MotoE as a perfect platform to enable Michelin to be involved in fully electric motorcycles on a very visible worldwide stage.”

WSBK heads back to its roots this weekend at Donington

Jerez Day One | Times/Quotes/Reports/Images | All classes