The all-new FIM Enel MotoE World Cup will kick off in 2019. The series will be the first motorcycle World Championship where motorcycles are powered by electric motors.

All competing motorcycles will all be identical in the Cup and supplied exclusively by Energica Motor. In line with the sustainability objectives, all the energy stored in the batteries that powers the motorcycles will be produced from renewable resources, a commitment from Enel, the sponsor of the series.

Energica Motor Company is the first Italian manufacturer of high performance electric motorcycles, and the manufacturer of the Energica Ego Corsa on which MotoE riders will compete. 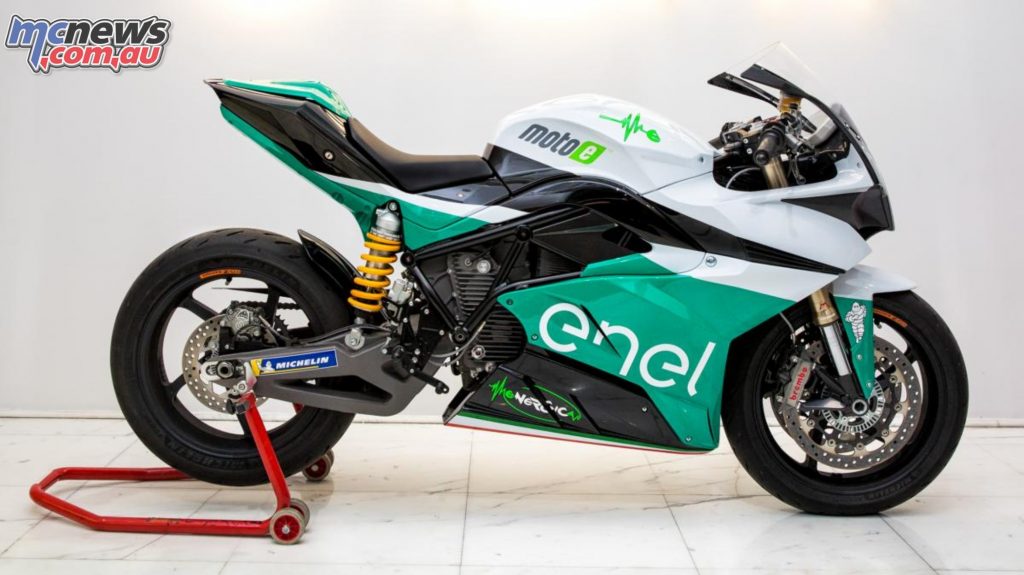 All competing motorcycles will be identical although for some parts, like for example the suspension springs and valving, the teams will be allowed to choose between a range of different springs with varying stiffness’ depending on the rider’s specific needs.

Motorcycles will be kept together in a dedicated E-paddock structure, in which each team will have its own box.

The chargers and the Solar Panels

Enel X, the official smart charging partner of the series, will provide a mobile charging solution, the JuiceRoll, composed of a semi mobile unit and a mobile unit per motorcycle:

Solar panels will be coupled with smart meters, that are measuring equipment to constantly track the electrical energy use of the event.

Enel will provide a distribution system that will connect JuiceRolls and the MotoE paddock auxiliary’s loads to the grid, integrating Solar Panels. The result is the complete electrification of the Moto E event, from the grid to the motorcycle.

The grid will be composed of 18 riders, including the presence of female rider, Maria Herrera. Split up into 12 different Teams there will be ten different nationalities lining up in the FIM Enel MotoE world cup, from Australia to Brazil including many European countries. Four former MotoGP riders including Sete Gibernau (twice MotoGP runner up), two former FIM Moto3 World Champions Nico Terol (2011) from Spain and Mike Di Meglio (2008) from France, two FIM Endurance World Champions like Josh Hook (2017) and Kenny Foray (2014), and a former European Moto2 Champion, Eric Granado from Brazil.