Dovi also blows an engine in the Ducati

It was a dramatic Friday at the Gran Premio d’Italia Oakley, with some big headlines, a shake-up on the timesheets and a record broken as Andrea Dovizioso (Ducati Team) became the fastest man in MotoGP when he set a new top speed record of 356.4km/h – up from the previous best of 354.9km/h set by compatriot Andrea Iannone in 2016.

It was however Team Suzuki Ecstar’s Iannone quickest man overall on Day 1 at Mugello – 0.387 ahead of Maverick Viñales (Movistar Yamaha MotoGP), with reigning Champion Marc Marquez (Repsol Honda Team) less than a tenth further back to make it three different bikes in the top three.

“I recovered my head here in Mugello, after a couple of difficult years here. Fortunately the feeling with the bike here is really good, and everything is going really well in the garage. Since the start of this year I’ve worked in a different way with my team, and it’s really good. We have a great chance at this track and I’m pumped to have the support of the fans, but of course it’s difficult because all the riders are really close, but I’m ready for the fight and I won’t give up! My feeling is improving race by race.”

“I gained a lot of confidence in Montmeló during last week‘s test and today has been good too. Despite my crash this morning the practice went very well, I‘m really happy. We still have work to do, because we have room for improvement for tomorrow. I‘m happy that I felt good with the bike and with the tyres in the afternoon in the hotter conditions and I hope it will be the same on Sunday during the race. Our race pace isn‘t looking so bad. The team didn‘t change the settings much since the test in Catalunya, the bike is quite similar. I‘m feeling good on it and will continue to try to do my best. Today I couldn‘t do ten laps in a row because we had many red flags. I hope Michele is OK, because the crash was unreal. I wish him the best of luck.”

“Mugello is a track where we usually struggle, but we’re right there in third place. Our pace isn’t bad either, so we look at these positives and will see tomorrow if we’re able to improve further. Honestly, we were expecting to struggle a bit with the front tyre if temperatures were higher compared to the test, as was the case today, because the hardest compound is still a bit too soft for us. That said, I think we still have some margin for improvement. Besides, generally speaking, we’ve worked well and have improved our lap time quite a bit from the morning; tomorrow we’ll try and continue on this positive path. Finally, I’d like to add that I hope Michele [Pirro] gets well and comes back soon.”

Marquez did crash on Friday and also suffered a run off the circuit but some bigger headlines instead came from two Red Flags in FP2. The first went out following a high-speed crash for Michele Pirro (Ducati Team) into Turn 1, with the Borgo Panigale factory’s test rider tumbling through the gravel following a highside. After being treated by the track, it was confirmed that Pirro was conscious and the Italian was then transferred to Ospedale Careggi in Florence for further checks.

Action then got back underway, but not for long – with Dovizioso then suffering a mechanical problem into Turn 1 and flames briefly appearing around his Desmosedici. After going third in the morning and setting the fastest top speed, the incident put a dent in the day for the 2017 Italian GP winner and he was P13 on the combined timesheets on Friday – with fellow big name Dani Pedrosa (Repsol Honda Team) also out of provisional Q2 graduation in P14, 0.022 off the Italian.

“For us it was quite a complicated day, starting with this morning. We had good pace but we were unable to see out our scheduled work programme because I had a problem with the bike in FP2 and had to use the other one to finish the session. Unfortunately the rear tyre didn’t have enough grip, and as well as not being able to set a good time, we weren’t able to work the way we wanted to. Michele’s crash was truly horrific and I really hope it was nothing serious.”

“It was a tough day because I wasn’t able to find a good feeling with rear, as I struggled a lot with lack of grip. We tried several tyres and also a few different suspension settings, but we couldn’t manage to improve grip. We have to understand if it’s something we must improve in the bike’s setup or if the situation is more related to the track conditions, but whatever the case, tomorrow it will be important to keep our concentration high, work well, and try and solve this matter in view of qualifying and the race.”

Back at the top behind the fastest trio and the headline incidents, it was a solid day for top Independent Team rider Johann Zarco (Monster Yamaha Tech 3) in fourth overall, with Jack Miller (Alma Pramac Racing) confirming more good speed on the Ducati to complete the top five just 0.038 in arrears.

“The first day in Mugello was very interesting and I’m happy that I was able to improve my lap time in the last session. We’re working well with the team, although it’s a totally different track from all the others this year. With my experience I could understand which kind of riding style is fitting to this track, so we also have to set up the bike respectively to ride well and step by step we could do that. We want to keep working, finding the best possible pace with the used tyre and then push with the new tyre to have a great qualifying.”

“I am pleased with what we have done today even though I have not been able to make the most of the soft tyre. However, I am really happy about the incivise race pace. I hope to continue like this tomorrow because the feelings are very positive”.

Cal Crutchlow (LCR Honda Castrol) was also in close company, however, just 0.030 behind the Queenslander to take P6 and show some good pace as he gets back to full power following his highside at Le Mans.

Home favourite Valentino Rossi (Movistar Yamaha MotoGP) closed the gaps up even more as he took seventh only 0.012 back, edging out VR46 Academy and EG 0,0 Marc VDS rookie Franco Morbidelli by less than half a tenth on home turf.

“It was a positive Friday, because this morning and also this afternoon I wasn‘t so bad, my pace is quite good. It‘s also true that we have a lot of different bikes and riders that are very fast, but we are also there. We‘re on our way, especially with the pace. We have to work on improving further, because I suffer from too much wheelspin at the exit of the corners, but for the rest I feel good with the bike. I hope that Michele is OK after his crash and wish him all the best for his recovery.”

“It was quite a positive day because from the morning onwards I was able to be fast and maintain a good pace. In the afternoon we continued to work in the same way: when I put on a soft new rear tyre, I expected to get my time down a lot, but it wasn’t possible because it didn’t have any grip. However we’re on the right path and I hope that tomorrow we can confirm these good feelings. I want to send all my best wishes to Michele, who is not only my team-mate here at Mugello but also a friend and I hope he can recover soon after this big scary moment.”

There’s a lot to play for in FP3 as the top ten scuffle to move through automatically to Q2, with Dovizioso and Pedrosa putting that at the top of their to-do lists once they get back on track. And with the field so close together, it’s sure to be another incredible day of action at the Autodromo del Mugello on Saturday. 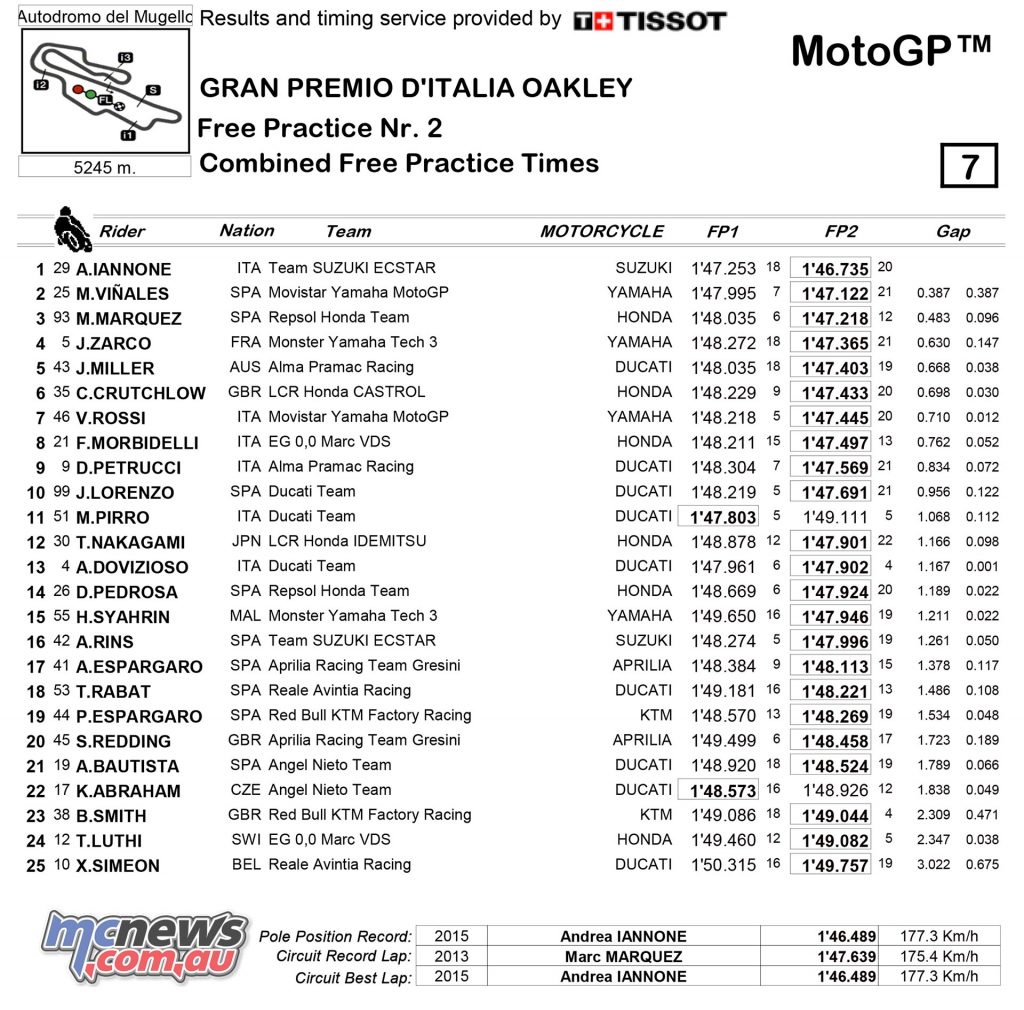 Mir and Lowes lead the Italians in Mugello

After finishing fourth quickest in FP1, Joan Mir (EG 0,0 Marc VDS) made his mark in the second Free Practice session to end Friday at the Gran Premio d’Italia Oakley as the fastest man in the Moto2 class, with rumours about his plans for 2019 equally continuing to make headlines.

Sam Lowes (Swiss Innovative Investors) was second in both of Friday’s sessionsas he gets back in the groove, with his best of a 1:52.236 just 0.112 behind Mir.

Third overall was Championship leader and home hero Francesco Bagnaia (Sky Racing Team VR46), who was just 0.001 off Lowes’ time after finishing FP1 in P7 – an incredibly small margin of difference given the two men are on two different chassis; the Brit a KTM and the Italian a Kalex.

Last year’s race winner Mattia Pasini (Italtrans Racing Team) was fourth quickest overall, making a huge improvement from FP1 where he finished P17, with the Italian only 0.028 back from compatriot Bagnaia’s time. Rounding out the top five was Alex Marquez (EG 0,0 Marc VDS), the only rider in the top 20 who failed to go quicker in the afternoon session.

Lorenzo Baldassarri (Pons HP40), after finishing fifth after FP1, was P6 overall on Friday, with rookie Remano Fenati impressing as he rides a Moto2 bike for the first time at Mugello – he was seventh fastest, improving from P10 in FP1.

Sky Racing Team VR46’s Luca Marini continued the Italian trend in the afternoon, improving from P12 in the morning session to end FP2 eighth fastest on board his Kalex. Andrea Locatelli (Italtrans Racing Team) was 0.037 behind his fellow Italian in P9, improving his time but not position at the close of play. Fabio Quatararo (MB Covenyors – Speed Up Racing) rounded out the top ten on Friday; the Frenchman jumping up ten places from FP1 to continue the good form he found in Le Mans. 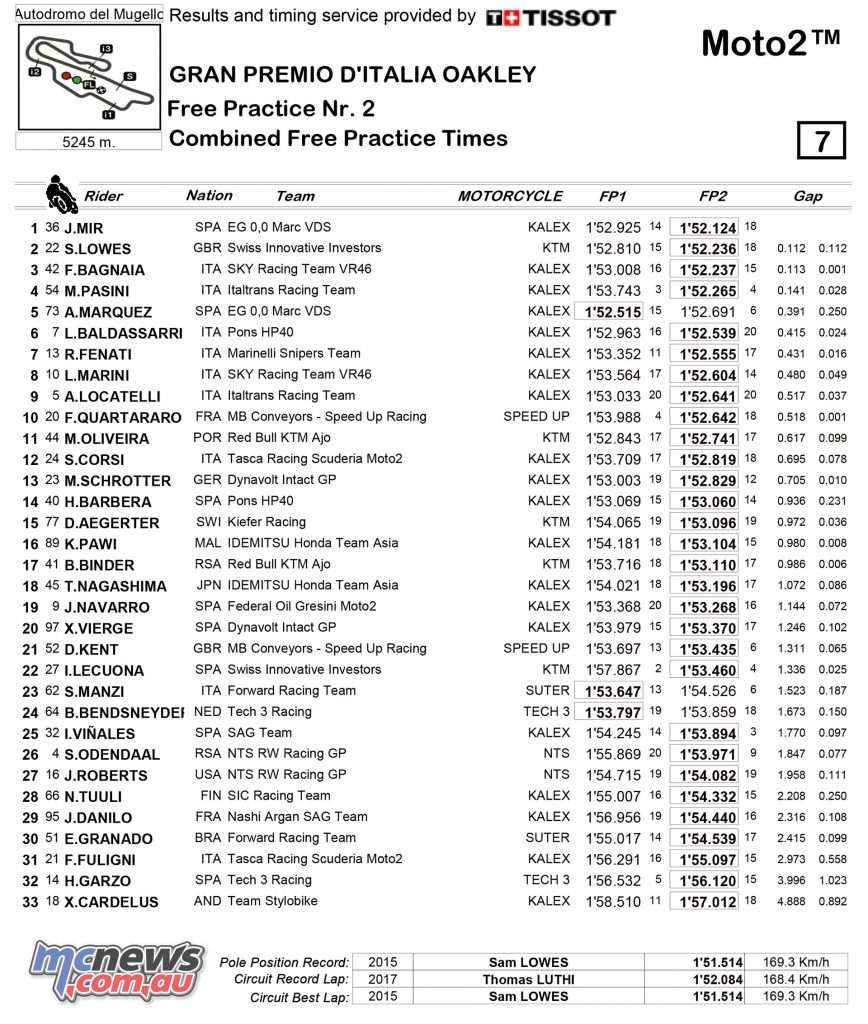 Jorge Martin (Del Conca Gresini Moto3) was the fastest man in FP1 and followed it up in FP2 by going 0.339 quicker than anyone else at the Gran Premio d’Italia Oakley to end Friday on top.

Rounding out the top three was SIC58 Squadra Corse rider Tatsuki Suzuki, impressively improving from P14 in FP1 for the home team.

With track temperatures almost doubling in the afternoon, the lightweight class times tumbled. Philipp Oettl (Südmetall Schedl GP Racing) was fourth quickest overall on Friday, dropping one position from his FP1 efforts despite going nine tenths quicker, and Kaito Toba (Honda Team Asia) leaped up the timesheets in the second session of the day, finishing fifth quickest after being down in P18 in the morning.

Home hero Marco Bezzecchi (Redox PrustelGP) was sixth quickest on the opening day at his home Grand Prix, his 1:57.788 was enough to move him up one position from FP1. Teammate Jakub Kornfeil was seventh quickest, the Czech rider cementing his top ten pace after finishing P10 in the first session; his time 1.5 seconds quicker this afternoon.

Niccolo Antonelli (SIC58 Squadra Corse) was one high-profile crasher who highsided at Turn 7 during the session. The Italian was taken to the Medical Centre for a check-up, but was thankfully declared fit. 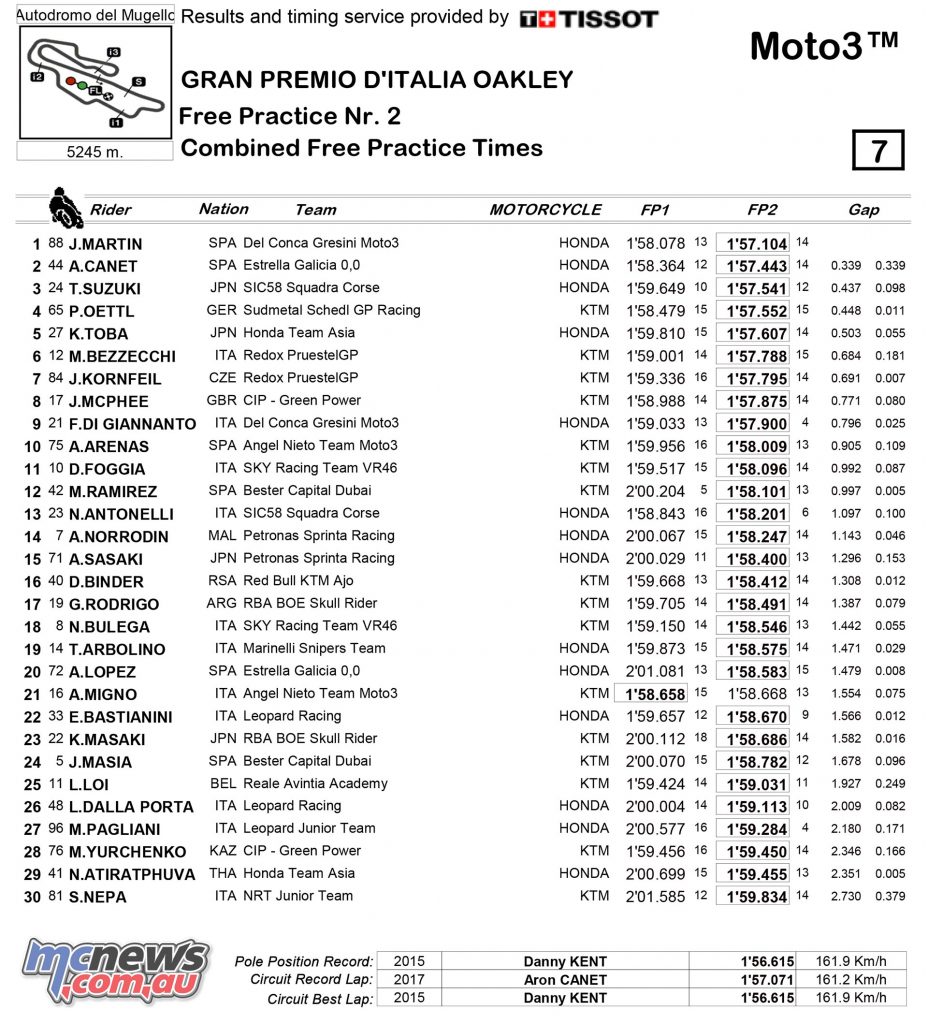 Boris on Mugello’s Tragedy and Triumph

Vinales and Marquez on the cat-mouse game | MotoGP Qualifying quotes

Images from Thruxton BSB with a focus on the Aussies