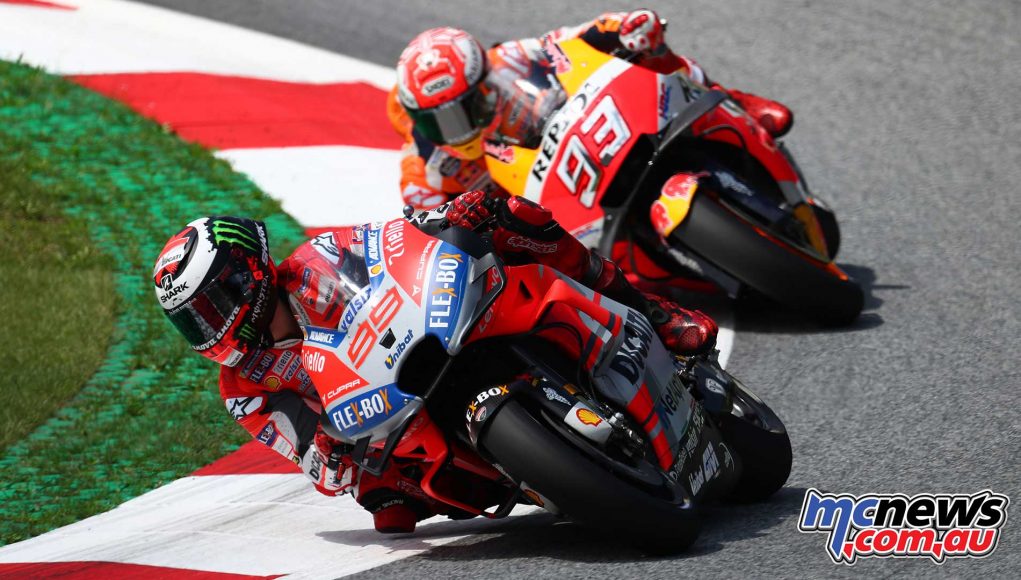 Can Lorenzo continue his winning streak…?

Silverstone promises to be an engaging round of this year’s MotoGP season as a resurgent Jorge Lorenzo keeps Marc Marquez on his toes, and creeps closer to Valentino Rossi in the standings.

Silverstone featured the first showdown between defending champion Jorge Lorenzo and a rookie Marc Marquez back in 2013.

Five years later we are back on British soil for what promises to be another exciting event, with the added complexity of a new surface for the MotoGP regulars to get their heads and tyres around.

At 5.9 km Silverstone is one of the longest on the MotoGP calendar. Built over a former airfield thus in flat terrain, its reputation is fast and not for the feint of heart. The weather…? Well that’s anyone’s guess…

Rain could be something that could play into the hands of some on the grid. After the duel that Lorenzo won in 2013 for his third premier class victory there, the 2014 re-run saw Marquez strike back – before the rain hit again in 2015.

Then it was Valentino Rossi (Movistar Yamaha MotoGP) who took the top step – and Marquez crashed out. It’s a tough time for Yamaha of late though as they suffer through their longest run without a win since the nineties, but Rossi tamed the rain to perfection here three years ago.

And the following season? In 2016 Maverick Viñales took his first ever premier class win at the circuit, so it is place of fond memories.

In the great British summer of 2017 though, it was Andrea Dovizioso (Ducati Team) who pitched it to perfection. And of all those who know they have pace at Silverstone, he’s the one who is looking to hit back quick hard after being left out of the fight in the latter stages recently in Austria. Also often a master of tricky conditions, ‘DesmoDovi’ will be aiming to make a statement.

Cal Crutchlow (LCR Honda Castrol) is another to watch, and the first of three lions racing on home turf. Crutchlow was on pole and a podium finisher in 2016, and took fourth last season from another front row start. Having already won a race this season, Crutchlow should be a serious threat at the front – and is another who can master difficult conditions.

There’s a lot at stake, too, with only two points separating the fight for top Independent Team rider in the standings. It’s Danilo Petrucci (Alma Pramac Racing) who’s currently ahead on 105, with Johann Zarco (Monster Yamaha Tech 3) on 104 and Crutchlow on 103. Probability says that will change once again in the British GP.

With a rather difficult Austrian Grand Prix in his mind, Monster Yamaha Tech3 star Zarco can’t wait to be back on track this Friday, aiming to find a decent pace from the beginning and prove his great talent again in reaching the top positions again. In the overall standings the fast Frenchman sits in seventh, just nine points from the top 5.

“The Silverstone circuit is a huge track compared to Austria. I heard that we are going to have new tarmac, so maybe we find less bumps than last year. Last weekend in the race, everyone could see that I was struggling with my bike, but I keep trusting in the work we do together with my team, anyway I will just go, try to do my best as usual and want to find a good feeling quickly. This track is quite fast and I like this, maybe I can find some different lines to be faster than the other guys or fast enough to be back close to the podium, which would be simply fantastic.”

Team Suzuki Ecstar, meanwhile, want to get back near the front after a spate of podiums earlier in the season – and Silverstone was the scene of their first win since 2007 when they were on top in 2016. That may have been with a different rider, but Alex Rins is a former winner at the venue too, in Moto3.

Scott Redding (Aprilia Racing Team Gresini) is another former winner and one with a stunning record on home soil, and he’ll want to try and get in the fight with fellow Brit Bradley Smith (Red Bull KTM Factory Racing).

KTM, after a run of bad luck, are also looking for a bit more in the UK. Will Pol Espargaro be back from injury? He hopes so, but if the 2013 Moto2 World Champion can’t ride, someone has to – KTM have to field a replacement.

Michelin will head to the British round with another challenge to face, due to a full resurfacing of the entire layout, the first time the whole track has had a completely new covering of asphalt in 22-years. With the new surface and the fact that Michelin has been unable to assess the material that has been laid, the allocation will be different to a usual MotoGP weekend.

The Michelin Power Slick range will feature four front and four rear compounds as opposed to the customary three of each. This is to give all the riders, teams and manufacturers the maximum opportunity to match the tyres which will work the best for them.

Available in soft, medium and two hard versions for both the front and rear, the range also has a split in the designs of the front specification of tyres, with the soft being asymmetric – with a harder right-hand-side – whilst the other three are all symmetric.

The length of the track and its fast nature of its layout over the 10-right-hand and 8-left-hand turns gives a need for an asymmetric rear tyre, so all four choices will feature this design, with the harder compound on the right shoulder of the tyre, this is due to the demands being greater for that part of the surface area over the 20-lap race.

Michelin and the rest of the field will be hoping for a dry race and England has baked in hot summer conditions this year, but the threat of wet ‘British weather’ can never be far away and the Michelin Power Rain tyres will be available if such eventualities arise. In a soft and medium compound for the front and rear, the tyres designed for the back of the motorcycle will feature an asymmetrical finish, coupled with symmetric fronts.

Bagnaia and Oliveira ready for a battle of Britain

The Red Bull Ring gave us another Moto2 race to remember, and this time it was Francesco Bagnaia (Sky Racing Team VR46) who took the points lead by taking the win.

‘Pecco’ just held off key rival Miguel Oliveira (Red Bull KTM Ajo) and the gap at the top remains tiny: just three points going into the GoPro British Grand Prix. If the two have another duel, that could easily switch back – and both can take big positives from their current form.

For Oliveira, he may have lost the lead but the qualifying struggles that earlier plagued the Portuguese rider at some rounds now seem to be behind him. For Bagnaia, his earlier struggles with fitness after some falls are likewise a thing of the past – so it’s gloves off and game on.

Luca Marini (Sky Racing Team VR46), meanwhile, is likewise on form. Alongside MotoGP™ points leader Marc Marquez (Repsol Honda Team), he’s one of only two riders across all classes to have taken a podium in the last three races – and should be underestimated at his rivals’ own risk.

Then there’s Alex Marquez (EG 0,0 Marc VDS) who has pace at Silverstone, Mattia Pasini (Italtrans Racing Team) was on the podium last season, Brad Binder (Red Bull KTM Ajo), Lorenzo Baldassarri (Pons HP 40), Joan Mir (EG 0,0 Marc VDS) and Fabio Quartararo (+Ego – Speed Up Racing) – the list of names who are all sure to be in the mix can go on and on.

Another name to watch could be Sam Lowes (Swiss Innovative Investors). The Brit has a great record at Silverstone and will want to add to it. There hasn’t been a rostrum finish for the former WorldSSP Champion in 2018 so far, but the British GP is certainly a likely venue for Lowes to be back #OnIt. Compatriot Danny Kent (+Ego – Speed Up Racing) will also be looking to boost his form at home, and won at the venue in the lightweight class in 2015.

Bezzecchi aiming for a Great British take off

Marco Bezzecchi (Redox PruestelGP) pulled the pin to perfection in the Austrian GP, taking his second win of the season in style and giving himself the perfect platform from which to launch a serious assault on the standings.

Only the weekend after breaking his wrist in a crash at Brno, Martin’s ride was nothing short of a stunner. Staying with Bezzecchi and the lead group throughout – and fighting for the lead – the Spaniard dug deep to try and minimise the damage to his Championship charge, pulling that off perfectly with the podium.

Just mugged at the end by a late-charging Bastianini, his P3 nevertheless means he’s only 12 points off the top. With another two weeks to recover, that seems a job well done…but will the behemoth of Silverstone prove a much bigger challenge?

It was an expensive weekend in the title fight for his teammate Fabio Di Giannantonio as he took P11, and for Estrella Galicia 0,0’s Aron Canet just ahead of him. Both really took some damage to their Championship bids at the Red Bull Ring, but Canet also remains on the hunt for his first win of the season. At Silverstone, it will be a year since he last stood on the top step. Will returning to the venue play in his favour?

Bastianini also has a good record at Silverstone, John McPhee (CIP – Green Power) will be pushing hard at his home race after an awesome ride from the back in Austria and the likes of Gabriel Rodrigo (RBA BOE Skull Rider) could be a dark horse for the podium.

Silverstone is a vast, wide and expansive track for Moto3 machinery – who will tame it best? Can Bezzecchi break away at the front and stamp some authority on the Championship? Or will Martin once again reel him in?