Following Austin, Andrea Dovizioso leads the MotoGP Championship standings with 46 points. This is the lowest score for a rider leading the Championship after the opening three races of the year since 1996.

Marc Márquez’ win at Austin is the fourth time that he has won at any circuit in the MotoGP class after qualifying on pole position, leading across the line on every lap and setting the fastest lap of the race. It’s the third time at Austin (2014, 2016, 2018). The other circuit is Jerez (2014).

At Austin, Maverick Viñales stood on the podium for the first time since he was third in Australia last year. This was the 52nd podium finish in his Grand Prix career, equalling Wayne Gardner and Barry Sheene.

With his third at Austin, Andrea Iannone stood on the podium for the first time since he switched to Suzuki in 2017, becoming the eighth Suzuki rider with at least one podium finish since the introduction of the MotoGP class in 2002.

This was the first back-to-back podium finish for Suzuki since Australia/Japan in 2016 with Maverick Viñales, and only the fourth in the MotoGP era since 2002.

Marc Márquez and Maverick Viñales made Texas the first Spanish 1–2 since Valencia 2016 when Jorge Lorenzo finished ahead of Marc Márquez. COTA was the 44th in the premier class overall.

Johann Zarco has scored points in the last 20 successive races and finished as the top Independent Team rider in eight of them, including last time out at Austin. The last time he failed to score any points was in Qatar last year, when he crashed out after leading the first six laps of the race on his MotoGP debut.

Yamaha have not finished on the top step of the podium for the last 13 races, their last win coming at Assen last year with Valentino Rossi. The last time Yamaha had a sequence of more than 13 races without a win was the 18 races that included the last two races of 2002 and the 16 races of 2003.

Jorge Lorenzo will celebrate his 31st birthday on the opening day in Jerez, which will also be the 16th anniversary of his Grand Prix debut at this track. Then, he had to miss the first day due to being underage – turning 15 the following day.

No Yamaha riders were on the podium in the MotoGP race last year at Jerez; the first time this happened at this track since 2006.

Tom Lüthi is the only one of the five rookies in the MotoGP class this year to have previously finished on the podium at Jerez in any of the smaller classes, doing that from 2010 to 2012 in Moto2.

After scoring points in the two opening races of his rookie season in the MotoGP class, Hafizh Syahrin failed to score any points at Austin after crashing out of the race. He is still, however, leading the fight for Rookie of the Year. Syahrin will celebrate his 24th birthday on the qualifying day at Jerez.

This is the 32nd successive year that a motorcycle Grand Prix event has been held at the Jerez circuit since it was first used in 1987. Below are some facts and statistics related to Grand Prix racing at that track.

Assen is the only current venue that has been used consecutively for a longer period than Jerez.

The qualifying day at Jerez will be the 50th anniversary of the first win by a Spanish rider in Grand Prix racing, which was Salvador Cañellas winning the 125cc race in 1968 at Montjuich.

Almost 23 years ago, Alberto Puig’s victory at Jerez on 7th May 1995 was the first win for a Spanish rider in the premier class on home soil.

Since the first Grand Prix race in the premier class, Honda have had 20 wins at Jerez, the last of which was last year with Dani Pedrosa.

Yamaha have had eight wins at Jerez in the premier class, the last of which was two years ago with Valentino Rossi.

Ducati’s only win at Jerez was in 2006, when Loris Capirossi won from pole position. The last time a Ducati rider finished on the podium at Jerez was last year, when Jorge Lorenzo crossed the line in third place – also his first podium finish with Ducati.

In 2016, Aleix Espargaró finished in fifth place at Jerez to equal the best ever result for Suzuki at the circuit since the introduction of the MotoGP class in 2002 (Loris Capirossi, 2008). The most recent of Suzuki’s two victories at Jerez was in 2000, when Kenny Roberts Jr won the 500cc race on his way to clinch his world title.

There has been at least one Spanish rider on the podium in the MotoGP race at Jerez for the last 14 years, a sequence that started in 2004.

Valentino Rossi is the most successful rider at the Jerez circuit on nine wins, with a single victory in both the 125cc and 250cc classes to add to his seven in the premier class.

2016 was the only time since 2009 that Spain did not have at least one winner across the three classes in Jerez.

There have been 5 different winners in the MotoGP class at Jerez in the last six years: Casey Stoner, Marc Márquez, Jorge Lorenzo, Valentino Rossi and Dani Pedrosa, who has two wins to his name.

For the last four years at Jerez, the rider who has won the MotoGP race has started from pole position.

Arón Canet won last year for the first time in his Grand Prix career at Jerez, becoming the sixth-youngest rider to have won in the Moto3 class since its introduction in 2012.

Marc Márquez won for the 62nd time in his Grand Prix career in Texas. It was his 36th win in MotoGP on what was his 93rd start in the class – just one less premier class GP win than four-time 500cc world champion Mike Hailwood.

Riders with most wins in the premier class

Winning streak at the same circuit

Jorge Martín’s win at Austin was the 50th for a Spanish rider since the introduction of the Moto3 class back in 2012. Spain is the most successful nation in this class, as shown in the following table.

Wins by nations in the Moto3 class

This was also the 222nd victory from a Spanish rider in the lightweight category. Italy leads the way with 239.

At Austin, Francesco Bagnaia won his second Moto2 race, becoming only the fourth Italian rider to win at least twice since the introduction of the Moto2 class back in 2010 – along with Mattia Pasini, Franco Morbidelli and Andrea Iannone.

Last year at Jerez, Francesco Bagnaia stood on the podium on what was his fourth start in the Moto2 class. He crossed the line in 2nd place from 6th on the grid. He is aiming to become the second Italian to take back-to-back Moto2 victories, after Franco Morbidelli.

Francesco Bagnaia has scored points in the last 15 successive races. The last time he failed to score any points was in Italy last year, when he crashed on the final lap.

Álex Márquez finished in second place in Austin, his 9th podium finish since he stepped to the Moto2 class in 2015. Last year at Jerez, he qualified on pole position for the first time in the class on his way to taking his first win in the intermediate category.

Miguel Oliveira crossed the line in third place at the Circuit of the Americas, which was his 11th podium finish in Moto2 – equalling Sam Lowes as the rider on the current Moto2 grid with the most podium finishes. Last year at Jerez, he passed Mattia Pasini five laps before the end to finish in the race in third.

Simone Corsi and Dominique Aegerter are the only other riders currently competing in the Moto2 class who have stood on the podium in Jerez since the introduction of the category in 2010. Aegerter will not be racing at the venue this season, however, as he recovers from an injury sustained in training.

Iker Lecuona finished in fifth at Austin; his best result across the line on what was his 22nd Grand Prix start.

In 2016 at Jerez, Sam Lowes qualified on pole position for the Moto2 race and went on to win his second race in the intermediate category.

Jorge Martín’s win in Austin was the third in his Grand Prix career, meaning he becomes the equal most successful rider on the current Moto3 grid alongside Niccolò Antonelli and Arón Canet.

After his win at Argentina, Marco Bezzecchi was on the podium for the second successive time in Austin, which is the first back-to-back podium for a KTM rider since the final two races in 2016 with Brad Binder. 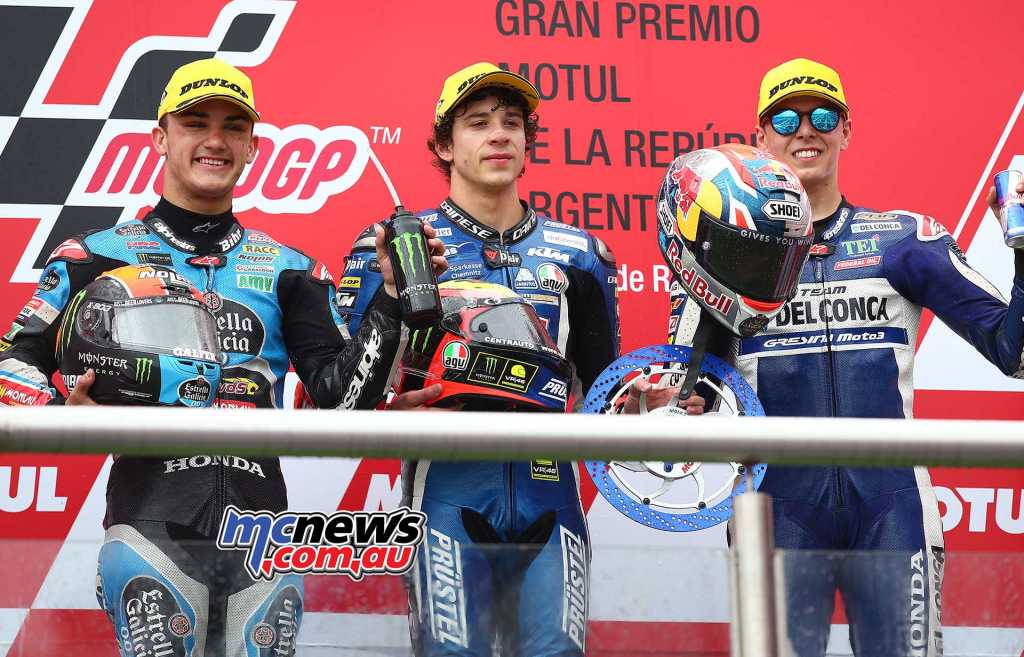 Marco Bezzecchi crossed the line in third at Austin–his 3rd podium finish in Moto3, equalling Andrea Migno and Jakub Kornfeil. He retired from the race last year at Jerez, nine laps before the end.

In Texas, Enea Bastianini stood on the podium for the 19th time in the Moto3 class. He’s finished in eighth place for the last two years at Jerez, his best result at this track. 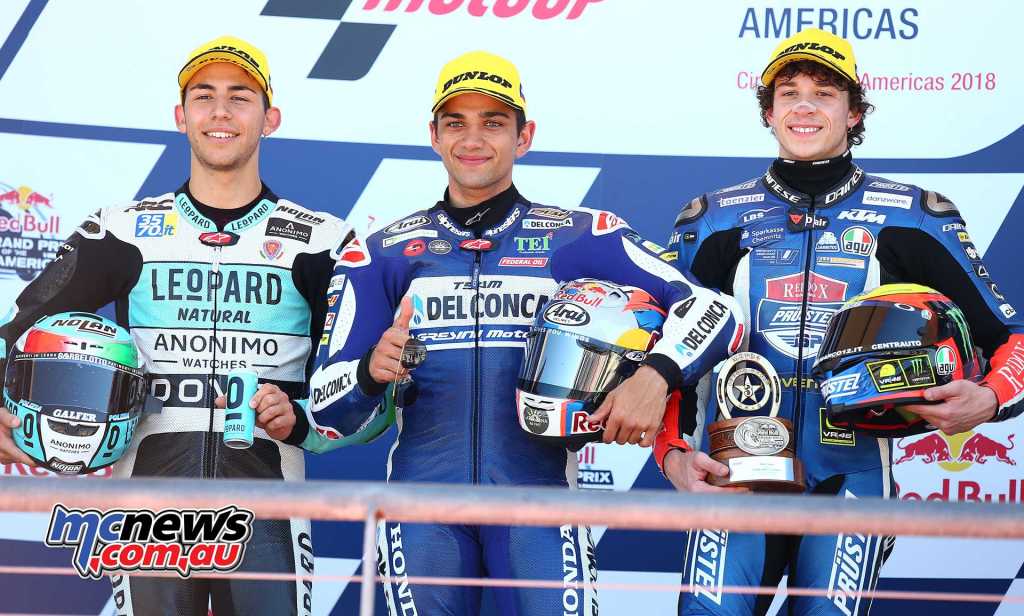 Andrea Migno finished in fourth at COTA, which is his best result across the line since his victory at Mugello last year. Migno’s best result at Jerez is a sixth place last year.

Nicolò Bulega started from pole position for the first time in his Grand Prix career at Jerez in 2016. Along with Jorge Martín (2017), he is the only rider on the current grid who has started from pole position at this track. In addition, Bulega (2016) is one of only two riders, along with Arón Canet (2017), to have stood on the podium at this track.

No rider has won the Moto3 race in Jerez after qualifying on pole. The last rider to win a lightweight class Grand Prix from pole at Jerez is Marco Simoncelli in the 125cc class back in 2005.

The fifth oldest rider in the current Moto3 field, Philipp Öttl, will celebrate his 22nd birthday before the opening day at Jerez

MotoGP heads to Austria for back-to-back race weekends, with crowds!