Closely associated with the F4 RC Superbike, which has proven its potential battling for the top positions in the World Superbike Championship, MV Agusta are set to release the MV Agusta Brutale 1000 Serie Oro.

This incredible new nakedbike has 208 hp at 13,450 rpm and 115.5 Nm of torque.  With the dedicated racing kit, consisting of an engineered SC-Project titanium exhaust system and dedicated ECU, the maximum power is increased to exceptional value of 212 hp (156 kW) at 13,600 rpm.

While remaining loyal to the traditional transverse four-cylinder layout and continuing with the decision to employ radial valve positioning in the combustion chamber along with a central timing chain, unique technical characteristics employed only by MV Agusta, the engineers have revolutionised the original design, leaving only a few castings untouched in the process.

The titanium radial valves now slide through new sintered valve guides and open up into an entirely redesigned and CNC machined combustion chamber. Camshaft timing has been revamped, with the phasing updated on both the intake and the exhaust sides.

The pistons use new low friction Asso compression rings to improve performance and efficiency, while the crankshaft was redesigned from scratch and rebalanced to reduce to a minimum the vibrations and resulting parasitic power losses at the high rpm.

In addition to the new pistons rings and the new lubrication circuit also applied to the revamped primary drive and transmission, which employ gears precisely designed to reduce friction and noise.

These technical advancements translate into perceived quality by the rider with a noted mechanical noise reduction, a quiet engine that is incredibly responsive. Also contributing to the overall noise reduction, reaching limits lower than those required by current regulations, are the new clutch and phonic wheel covers which are then encased in carbon fiber to further attenuate noise.

To reach the extraordinary power of 208 hp, the airbox has been entirely reengineered. The careful study of the intake ducts and the use of special resonators allowed the TSS system (variable height ducts) to be removed, thereby reducing the overall weight of the engine by 1 kg while still obtaining an even fuller and more linear power curve.

A double injector system – one near the throttle body and the other above the intake duct – provides extremely precise injected fuel management in order to optimise high performance and emissions reduction at any rpm.

The 4-1-4 exhaust layout was deemed the best for this type of engine and firing order. The presence of the electronic exhaust valve is useful not only to comply with regulations, but also proves to be fundamental for managing the counter-pressure in the exhaust system to improve engine torque. 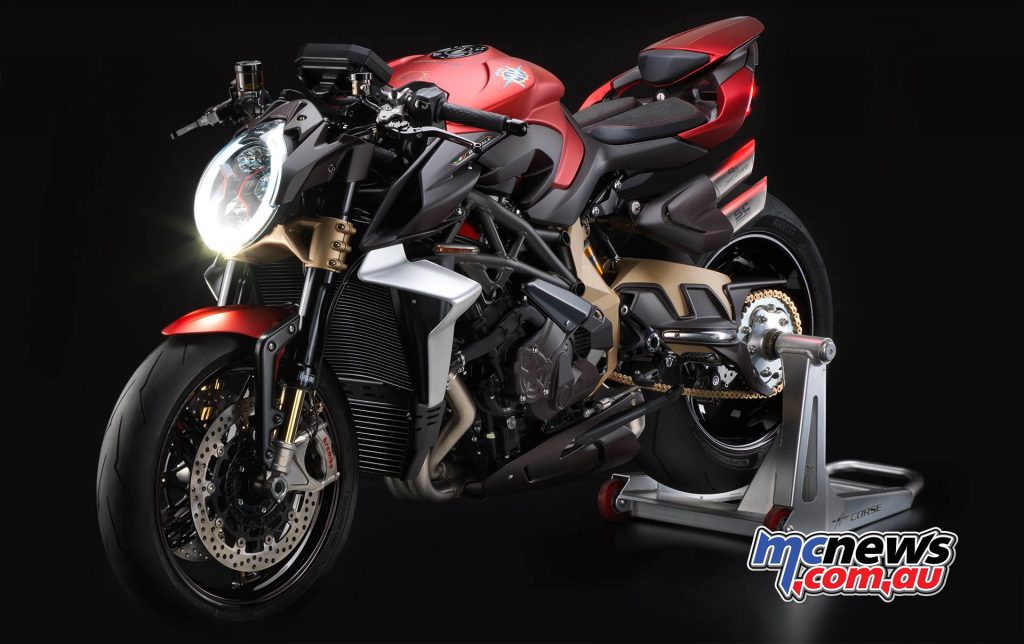 In collaboration with Eldor, MV Agusta has developed a new ECU dedicated to the Brutale 1000 Serie Oro four-cylinder. Managed by a full multimap Ride-by-Wire system and regulated by an IMU inertial platform, the Brutale’s riding dynamics are comparable to that of a true Superbike.

The inertial platform manages both the traction control (which can be adjusted to 8 levels or deactivated) and the anti-wheelie system which provides two options: active or inactive. Completing the electronics package are the Launch Control and EAS 2.0 Up&Down electronic gearbox systems, active both in up and downshifting.

While the F4 RC was the starting point for developing the engine in the all-new Brutale, MV Agusta’s heritage is evident in the chassis architecture. Pioneers of the “composite chassis structure” with steel trellis connected to aluminium side plates, MV Agusta has maintained this engineering concept – also applied to the new Moto2 bike ready to compete in 2019 – but evolves it significantly on the Brutale 1000 Serie Oro.

A single-sided swingarm, 1432 mm wheelbase, and the electronically adjustable Öhlins fork, fastened to steering triple clamps that have been redesigned and engineered from scratch for the all-new Brutale 1000 Serie Oro.

The Öhlins TTX36 shock absorber and the steering damper are also managed by a dedicated electronic ECU.

An aerodynamics study aimed at improving downforce and high-speed stability is clearly visible with the spoilers applied beside the radiator, markedly improving the load on the front wheel at high speed. The downforce effect begins to contribute significantly at speeds over 200 km/h improving stability and acceleration. All of this without hindering handling, which has always been a strong point of MV Agusta naked sports bikes.

The braking system is, as always, state-of-the-art with the new Brembo Stylema calipers that grip 320 mm diameter floating discs. Electronic ABS management is entrusted to the Bosch 9.1 ABS system, the most compact and lightweight on the market.

Carbon-fibre rims treated with a special transparent red paint contribute to reducing unsprung mass and inertia to a minimum.  Carbon-fibre is the protagonist of the entire superstructure, including the tail fairing covering. The presence of an anodised red copper wire in the carbon weave gives it unique visual impact and also contributes to improving the rigidity of the structure.

The lithium battery was a must, as well as many CNC machined components. The result is a total declared kerb weight of 184 kg.

The headlight is Full LED and can rely on Cornering Lights, controlled by the inertial platform and able to illuminate turns based on the lean angle, all beneficial for safe riding. For the first time on a bike, the internal part of the headlight unit is coloured and forms an “X” shape that the steering base also takes on. The equipment includes front and rear Daylight Running Lights which make the bike clearly visible, even in daylight.

All of the vital engine and electronics functions are displayed on the 5-inch colour TFT dashboard with 800 x 480 pixel resolution. The riders smartphone can be connected via Bluetooth to the dashboard to manage incoming calls, texts and music. The purpose of its particular arrangement above the fuel tank – which is fitted with a locking cap made from billet – is to make the front end even more compact and aggressive.

The exclusive connotation of the all-new Brutale 1000 Serie Oro is emphasised by the 300-unit limited edition and a dedicated kit made up of the titanium exhaust and dedicated mapping.