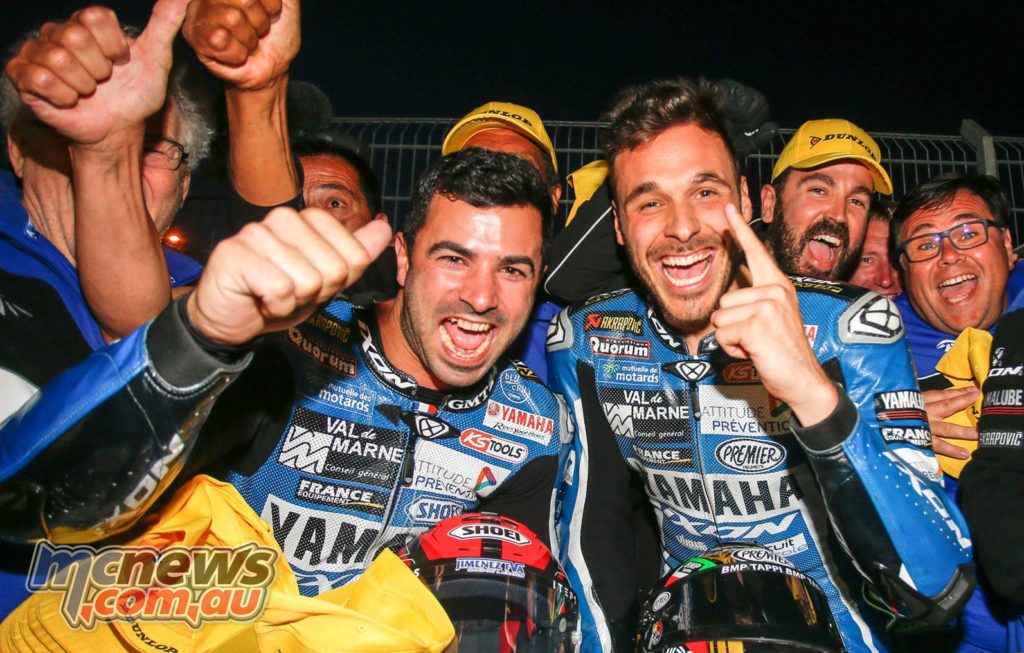 After winning the 24 Heures Motos in April, GMT94 Yamaha secured victory at the 8 Heures of Oschersleben following an epic duel with YART Yamaha Official EWC Team. 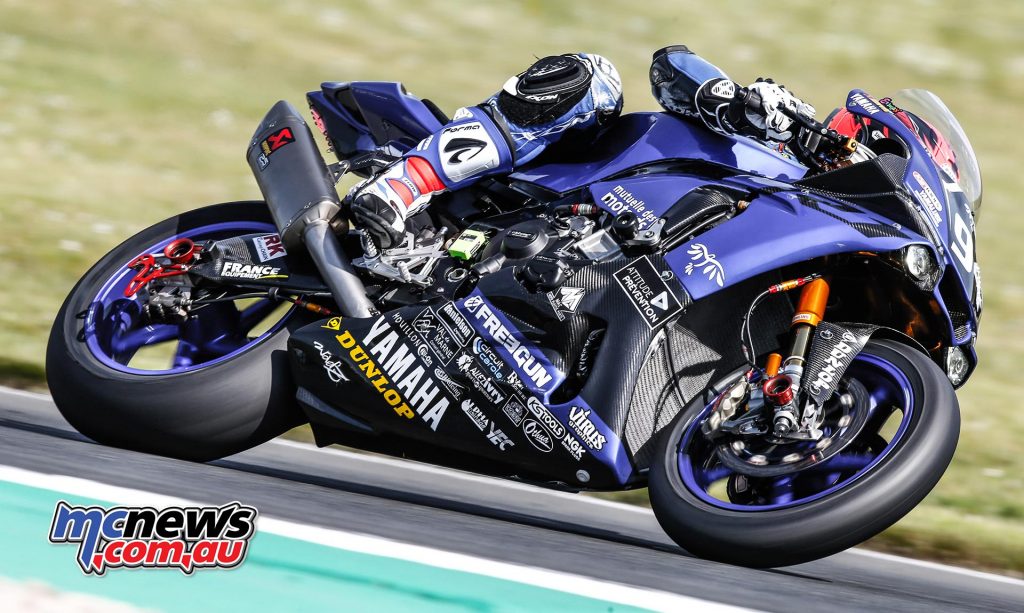 The two factory-backed R1 bikes once again staged a thrilling duel throughout the race. GMT94 Yamaha ended up the winner despite a stop-and-go for non-compliance with the refuelling procedure at the tail end of the race. But the penalty galvanized Christophe Guyot’s riders: David Checa set a new lap record of 1’26.814. 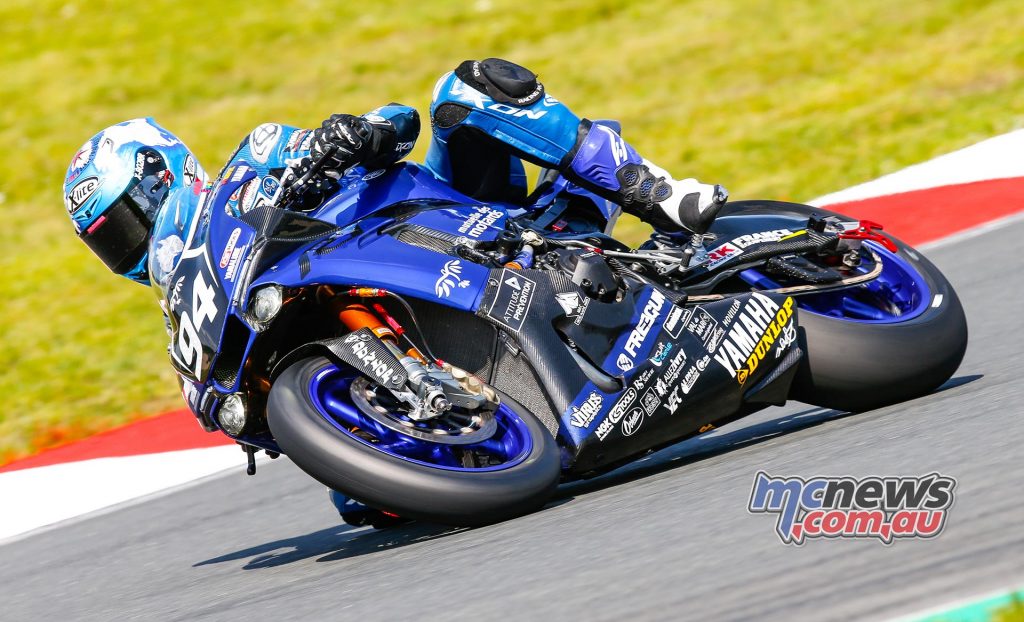 Another duel played out – for third place – between Bolliger Team Switzerland and Maco Racing Team. The two machines, both on the verge of running out of fuel, chose two different strategies a few minutes from the finishing line. Kawasaki Bolliger opted for a pit stop, whereas Maco Racing kept on going, attempting to eke out its last few drops of fuel. Their bet paid off for Greg Junod, Marko Jerman and Anthony Dos Santos, who took Maco Racing Team’s Yamaha to the third step of the podium. 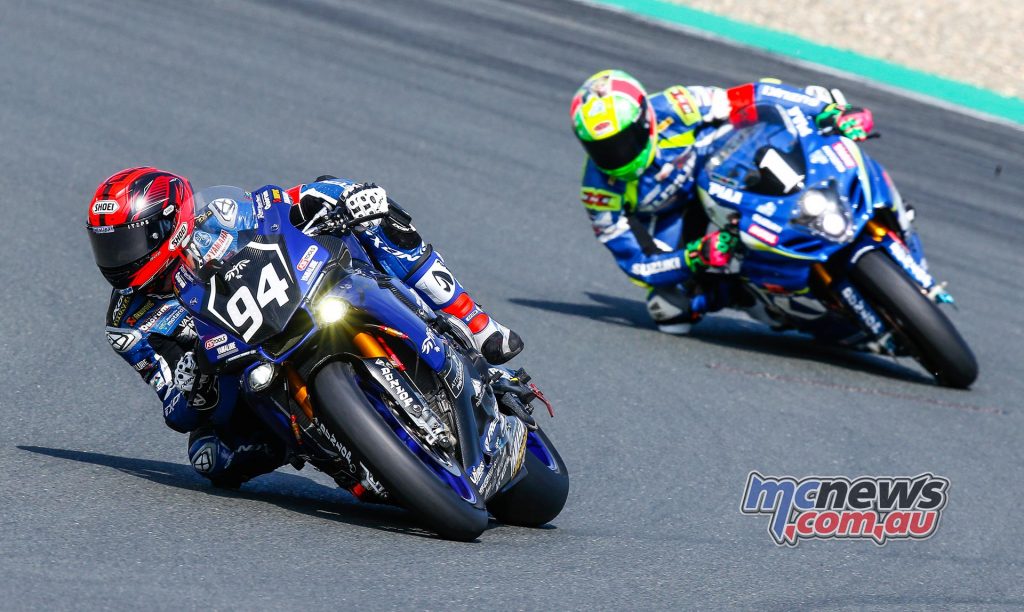 After starting the race from the bottom of the standings because of a tyre puncture, F.C.C. TSR Honda began a climb back up, and finished in 5th place. Gregg Black and Josh Hook rode the Honda #5 for practically the entire 8 hours, as Damian Cudlin was hampered by back pain. The Japanese team’s grit in Germany won them the Anthony Delhalle EWC Spirit Trophy.

The GMT94 team started from pole position with Niccoló Canepa taking the honours. The Italian began steadily, making it into the first corner in third, then steadily upping his pace during the opening laps. After ten minutes, he had taken the lead of the race and he set about extending an advantage at the front. Twenty minutes into the race, YARTs Brock Parkes had closed in on his back wheel and for the next few laps, the two did battle, before Parkes got past. Canepa carried on riding consistently good lap times before handing over to David Checa just before the hour mark. The experienced Spaniard immediately took the lead back, before the safety car made a brief appearance. When the green flags were waved, Checa did not look back and opened up a 30-second advantage over the YART team.

Two hours into the race Checa handed over to Mike Di Meglio and the Italian rode valiantly in his first race at the circuit, although Parkes was closing him down lap by lap. When the teams came in for their third pit stop Di Meglio’s lead was down to 16s, David Checa getting back on the R1 for his second stint. Checa once again put the hammer down, opening up a 40-second lead by the time he handed the reins back to Canepa at the halfway point. The Italian increased this to a minute, then managed the gap brilliantly, and when he came in to swap with Checa again, with three hours to go, the GMT94 team held a 55-second advantage. Checa re-joined 1.9s behind Parkes, put passed the Australian in just a few laps, taking the lead on track with the YART team still having to pit.

Unfortunately, the team were then given a stop and go penalty for having their lights on while refuelling during the pit stop. Checa amazingly kept lapping in the 1:27s, over one and half seconds quicker than anyone else at the time, in an effort to reduce the effect of the penalty. He opened their advantage to over a lap before he came in to hand over to Canepa during their seventh pit stop. The Italian immediately served their penalty, re-joining the race 17s behind the YART team. He closed this gap down to 10 seconds before the YART team made a pit stop, and once more GMT94 were in the lead, this time by 55 seconds. Canepa stretched the advantage again, even with the fading light, but then made the team’s eighth pit stop. He handed over to Checa once more for the final stint, with the Spaniard re-joining two seconds behind the YART Team. He quickly took Fritz for the lead, lapping in the 1:26s again, and opened up a 15-second gap with an hour to go. This became a one minute lead after the GMT94 team made their final pit stop, and the experienced Spaniard brought it home for his team, even affording himself the luxury of a fuel stop with twenty minutes to go.

He went on to cross the line in darkness 30.587 seconds ahead of Parkes, once again the finest of margins after 318 laps and more than 1166km raced. This, added to their victory at Le Mans, means it is now two wins in a row for the team and it also meant a hat-trick of victories at Oschersleben. The GMT94 Yamaha Official EWC Team are now second in the standings with 101 points, just seven points behind the championship leaders. To round off a great weekend for the GMT94 team, they also completed the ‘perfect’ triumvirate of pole position, race win, and fastest lap, thanks to Checa’s 1:26.814.

YARTs Broc Parkes started the race from second on the grid, heading into the first corner in fourth. The Australian lost no time in making his way to the front, battling and overtaking Canepa on lap 17. He opened up a lead of three seconds, before coming into the pits for the first time, Fritz jumping on the R1. Almost immediately passed by Checa, the German rode bravely, still feeling the after-effects of his crash at Assen in WorldSBK. An hour later he passed the baton back to Parkes after pit stop number two, trailing the GMT94 team by 30 seconds. The Australian continued where he left off, reducing the gap to the leader by 14 seconds in his second stint, meaning that when he handed over to Kohta Nozane, the gap to the GMT94 team was just 16 seconds.

This weekend was the Japanese rider’s first visit to the track and he found a steady rhythm to keep the GMT94 team and David Checa within sight, although he could not match them for pace. When he handed the R1 back to Parkes just after the halfway point, the YART team were one minute down on GMT94. Once again, the Australian got down to business, but despite his best efforts he could not close the gap in any significant way, and when the GMT94 team re-joined the track after their fifth pit stop he was passed by Checa for the lead. YART came in for the fifth time a few laps later, Nozane taking over, but by now they were over a lap behind. But crucially the YART team had been able to ride longer stints thanks to the durability of their Bridgestone tyres and could make one less pit stop than their rivals. This, combined with GMT94s stop-and-go penalty, meant the race was not over yet. When GMT94 came in for another pit stop, Nozane took over the lead and extended it to 10 seconds, before it was time to come in himself. He swapped with Frits, the German rider re-joining in second, now 55 seconds behind the GMT94 team. 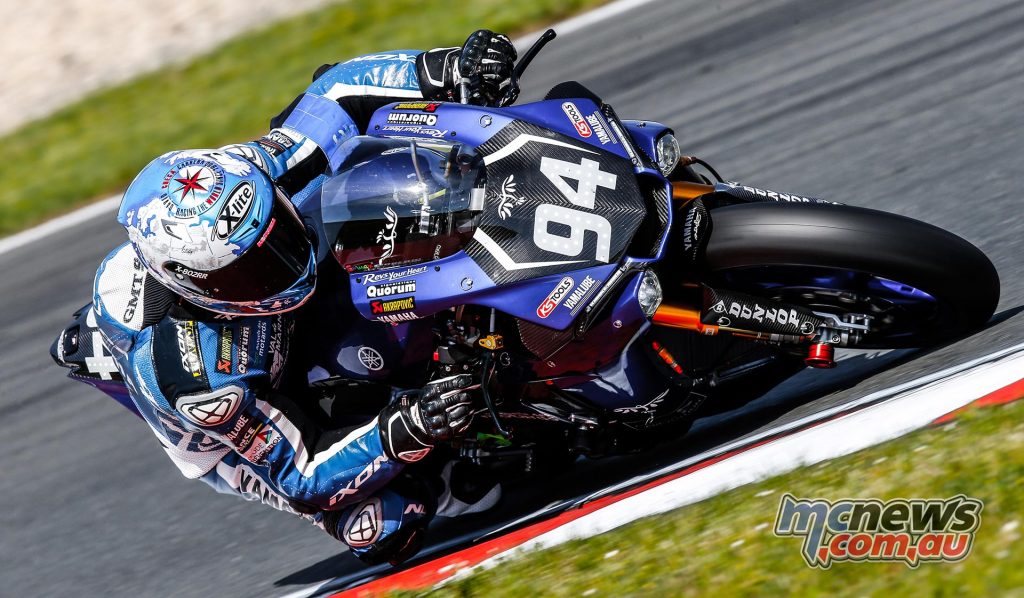 Fritz pushed and inherited the lead when the GMT94 team made their eighth pit stop with just over an hour to go. It was short-lived, as he lost out to a refreshed Checa in the next few laps, and when he handed over to Parkes for the final stint after the team’s seventh pit stop, the Australian had the seemingly insurmountable task of trying to make up a lap with less than an hour to go. He pushed, but despite closing the gap in the latter stages of the race due to Checas fuel stop, after an epic 8-hour duel Parkes and the YART team crossed the line in second. Consecutive podiums mean the YART Team is now fourth in the championship standings with 86 points, just 22 points behind the leaders.

The Mako Racing Yamaha Team of Greg Junod, Marko Jerman, and Anthony Dos Santos made it three R1s on the podium after a late charge saw them take third with just two minutes to go in the race, meaning Yamaha now lead the constructor’s championship by 33 points. Completing the clean sweep the MOTO AIN CRT Team of Hugo Clere, Alexis Masbou, and Robin Mulhauser took the Superstock victory to make it the perfect day for Yamaha and they now lead the class by 6 points.

Up next is round four of the 2017 FIM Endurance World Championship, the 8 Hours of Slovakia Ring, on the 23rd-24th June.

“This circuit has always been very successful, it is our 6th victory here. Germans are motorcycle enthusiasts and it is a great joy to win at Oschersleben. Our Yamaha R1 worked perfectly. The riders produced an incredible pace during the 8-hour race. Dunlop tyres have once again proven their longevity and excellent performance. “

“We changed strategy because of the ‘stop & go’. It was my first time here, I was not as familiar with the circuit as my teammates but I did everything I could. The important thing is that we won the race. It’s the second consecutive victory of the season, we have to continue like that, the team is doing a great job. “

The Bridgestone-backed YART Yamaha Official EWC Team had no choice but to bow to their rivals’ sheer determination, all the more so since Broc Parkes and Kohta Nozane covered practically all the stints between them. Marvin Fritz, who had sustained injuries at Assen as well as during testing in Oschersleben, was unable to shore up YART’s chances of winning.

“All three GMT94 riders were strong. Every time I got on the bike I tried to do my best, but they are a very good team. We didn’t have the best lead up to this race, with Marvin’s injury and a crash in the morning. Kohta did well, and all the guys put in good lap times, but overall, we just weren’t strong enough here in Oschersleben. It’s what it is. We missed the win, but its not like Le Mans, where we felt we could have won. We need to work for the next race in Slovakia, so we can fight for the win.”

Some overtaking action from the 8 Hours of Oschersleben – Video

Next race on the calendar: the 8 Hours of Slovakia Ring on Saturday 24 June