—  Aussie Superbike wildcards in the mix at Phillip Island

Australia’s World Superbike wildcards will leave nothing in the tank when it comes to competing in front of a home crowd at Phillip Island this weekend. 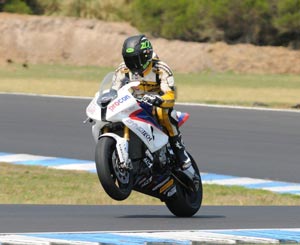 Championship, and regulation changes have allowed a handful of QBE Australian Superbike Championship contenders to put their hand up for a grid spot.

Next Gen Motorsport’s Glenn Allerton and Team Honda Racing’s Jamie Stauffer have each secured a start for the Superbike races, while Stauffer’s younger teammate Josh Hook will campaign an entry in the Supersport field.

Two-time ASBK Champion Glenn Allerton has put his BMW through its paces during this week’s intensive two-day test and, despite some early setbacks, is quietly confident ahead of the first official practice sessions tomorrow. 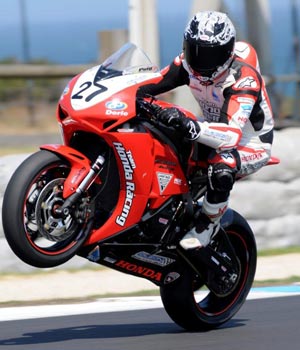 “On the opening day we had a few overheating problems with the bike I am going to race so had to use the standard bike for much of the day,” explained Allerton.

“There was a sprinkling of rain on Tuesday morning which slowed us up a bit but by the afternoon we had the overheating issue worked out and managed to get some good clear laps in.

“I was within a second of the leaders and felt I got held up a bit by (Sylvain) Guintoli on my best flying lap so there is more to come.

“For the limited time we’ve had on the bike and considering things like the new surface and a new tyre we aren’t doing too badly.”

Allerton concedes he may not have the straight-line speed of the leaders but is hoping to make time back in other areas of the track.

“It’s only a 22-lap race so it’s going to be important to start well and find any advantage in the early laps,” he continued.

“I know I am not going to have the straight line speed of the leading guys, that’s a given, but I feel like I am able to make some time up on them in the corners so that’s what I’ve been focusing on.”

Stauffer and his Team Honda Racing outfit have used the two-day test to learn more about the WSBK-spec bike and make the necessary adjustments to bring it up to speed.

He shadowed Allerton on the overall timesheets, coming in 14th fastest with a best lap of 1m32.231s.

“We’ve found a good direction with the bike but are still looking for more improvements in lap time,” said Stauffer.

“Each time we’re learning more and more about the bike, each lap is helping us to determine whether we’re moving forward or not.

“The surface is definitely different – there is more grip overall but I was surprised to find that there are a few bigger bumps.

“The bike is very different to our ASBK machine in that we are able to change a lot more things. It’s been a big learning curve for myself and the team but we’re really enjoying doing something different.

“We’ll know more about where we’re placed after tomorrow’s sessions but after all of the feedback and data I think we’ll only be moving forward.”

The Superbike class will contest a 45-minute practice session tomorrow prior to two 45-minute qualifying sessions split across Friday and Saturday.

The final grid positions will be decided in the single-rider Superpole laps on Saturday afternoon before Sunday’s two 22-lap races.

In the World Supersport field, Josh Hook ended the two-day test on the cusp of the top 10, a 1.34.607s lap placing him 11th and in the mix with some incredibly talented company.

2012 Motul Australian Supersport Champion Mitchell Carr, who will campaign a full season in World Supersport this year, was 25th fastest after the final session.

The Supersport field will contest a series of practice and qualifying sessions across Friday and Saturday before Sunday’s pair of 21-lap races.