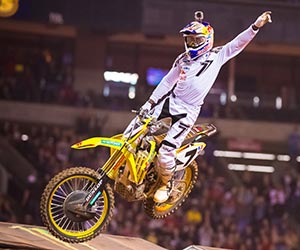 On Lap 1, Stewart moved into second place and advanced to the lead a few turns later as Villopoto assumed fourth. The race was stopped due to a red flag on lap three, and the field had to be re-started. Stewart, Barcia and Reed held down the top three positions after the re-start, and on Lap 5, Villopoto moved around Reed for third.

“That was a good race for us, we’re slowly getting better out here,” said Stewart. “Villopoto caught me by surprise on the pass, but I was still able to keep it together and hold the second place spot. It was one heck of a race tonight. That’s what it’s about.” 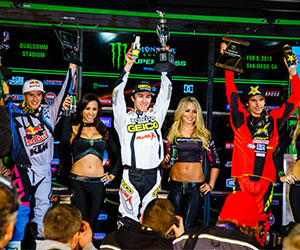 “It was a crazy night out there,” said Villopoto. “I made a costly mistake on the first start, so I knew my work was cut out for me. I was able to make things happen on the second start and get out in front after some wild racing. It’s coming down to crunch time and we were all able to make it happen tonight.”

After a mid-pack start, Wilson continued his charge past Wharton on Lap 7 to secure the number-two position. On Lap 9, Wilson was 1.5 seconds behind Hahn, patiently waiting to make his move. The two traded positions on Lap 12, but Hahn quickly regained the lead and rode to the second win of his career. Wilson finished second and Wharton finished third.

“It was a tough race,” said Wilson. “I didn’t make things easy on myself tonight with that bad start. I passed him [Hahn] once, but it wasn’t good enough.”

“That wasn’t an easy race,” said Hahn. “It was a tight race tonight with Blake 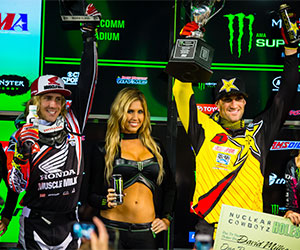 [Wharton] pressuring me early and Dean [Wilson] came on strong late in the race. Tonight was awesome, and my family was here tonight to enjoy this with me.”

Hahn has a one-point lead over Wilson in season standings and Wharton is in third.

In what was his 150th start in the 450 class, Reed made solid progression throughout practice and qualifying before finishing his heat race fourth.

The Australian got a good start in the Main Event and was sitting fifth before the race was red flagged on Lap 3.

Reed was third after the re-start and held pace with the front runners before fending off a late charge by Ryan Dungey to take the chequered flag behind eventual race winner Ryan Villopoto and James Stewart.

By his own admission Reed was a lot more comfortable on the TwoTwo Motorsports Honda CRF450 tonight.

“That was a much better result tonight,” Reed acknowledged. “I felt that I had a little more fight for the boys.

“I think now the bike is good, it is just up to me to trust it again. Every time out tonight I felt a little more comfortable.

“I feel like we are going in the right direction, it is just trying to get that trust back. Every time I pushed the bike tonight it gave me the right answers so it is up to me to find that little something extra,” Reed said.

Red Bull KTM Factory rider Ryan Dungey earned a hard fought fourth place in the ninth round of the 450SX Supercross Series, an FIM World Championship and his 250 class teammate repeated the result in front of a packed crowd at the Edward Jones Dome in St. Louis USA on Saturday night.

Dungey was placed in the second 450SX heat where he got a great jump but was pushed to the outside as they rounded the first turn. He stayed on track for third in the second corner and hung onto top three at the flag for a good gate pick in the main event.

He was in the middle of the pack at the start of the main event but moved into ninth by the end of the first lap. He then slipped by two other riders into seventh in lap three when the race was red flagged for an injured rider.

Track officials lined the riders back up in a staggered start format based on their positions at the end of the third lap to restart the race and Dungey quickly moved into fifth after the opening lap. From then on there was a five-way battle for the lead position. On the twelfth lap of the race, Justin Barcia, who was running 3rd, made a mistake at the triple jump, which allowed Chad Reed and Dungey to move around him. Dungey continued to pressure Reed for the remaining laps trying as hard as he could to earn that podium spot but eventually had to settle for fourth place.

“The racing tonight was very close and I did my best to make up for a not so great start,” stated Dungey. “I felt like I rode well once I found my momentum and I was able to have a good battle with Reed. Unfortunately, I just didn’t have enough in the tank to get around him on the final lap and I landed just short of the podium.”

Dungey is third in the championship points after Rd. 9

Musquin finishes fourth in 250SX class
Dungey’s Red Bull KTM Factory teammate Marvin Musquin fought hard for his fourth place in the third round of the 250SX Supercross East Coast Series.
The French rider had the second fastest practice time heading into the night show where he was placed in the first 250SX heat. He had a great jump off the start gate in his heat but crashed in the second corner. He remounted to be back of the pack but at the end of the first lap he was into the top ten. In the remaining laps he moved up to fifth for a qualifying position.

Musquin got away well in the main event and was fourth at the start but then crashed again in the sand section on the first lap. He quickly recovered only losing about five positions and finished the first lap in eighth place. For the next five laps he moved forward through the pack eventually passing into fourth place on lap five, a position he was able to defend through the remaining laps to finish one spot shy of the podium.

“I didn’t have my best performance tonight,” stated Musquin after the race. “I had some really good moments but I also had some moments I wish I hadn’t. I got frustrated in the middle of the race when some lines I took didn’t work out the way I hoped. I will keep working away at it and hope to return to the podium next weekend.”