It was 1980, and I had a poster of a naked girl on my wall. But this naked girl was sitting on the wickedest-looking motorcycle the world have ever seen, so she was somewhat less interesting to me than she would normally have been.

She was on a Suzuki GSX1000S Katana – a bike which sat the motorcycle universe on its prissy white arse after punching it the face a few times.

Designed by steel-eyed Germans still coming to terms with placing a distant second in WW2, it was styled like nothing before it, and lots of stuff after it. It was iconic, ground-breaking and I came very close to buying one. But the sales-animal told me I would have to wait a few months. I was not a patient man then, and I am not one now. I just bought a GSX100EX instead, and regretted it ever since.

Hans Muth was the former chief-of-styling for BMW. At first glance, Hans hardly possessed the kind of background that spoke of cutting-edge design. Still, when he got together with Jans Fellstrom and Hans-Georg Kasten, smashed a few beers and broke out the crayons, motorcycle design was never the same again.

They put what they’d developed inside a wind tunnel and at the end of the day, created the fastest and wildest-looking bike the world had yet seen.

The Katana debuted at the Intermot show at the end of 1980, and the first models were hitting showrooms in 1981, which is when that poster went up on my wall as my pants went into the laundry basket.

“What fresh and fabulous Hell is this?” I said to myself as I sticky-taped the image above my bed. Did this thing even exist and did it work? How could anything that looked like this possibly be serious?

But it was very serious.

It grunted out 97Nm of torque and spewed forth 111 brake horsepower. It tipped the scales at 232 Kgs dry, howled down the quarter mile in 11.5 seconds and, as I discovered after drinking six beers and taking the keys from my mate, Frank, had an indicated top speed of 240km/h – which was a fully fledged lie. The beast actually topped out at about 218.

Did it handle? Sure, by 80s standards all sorts of things ‘handled’. But almost none of them handled well. And by today’s standards they didn’t handle at all. But no-one knew any better back then.

Almost immediately, the world’s motorcycle media hated it. It was just too bizarre to succeed. I’m almost convinced that Hunter S Thompson was looking at the same poster I was when he wrote: “One of God’s own prototypes. A high-powered mutant of some kind never even considered for mass production. Too weird to live and too rare too die.”

Well, the media was wrong, and Hunter was half-right. The Katana lived and went on to become the stuff of legend when it finally died.

A part of this legend was built in 1982, when the factory produced a version called the SZ, which was eligible for racing under the international superbike rules. Then for reasons to do with racing and Honda, the Kiwis got involved and the mythical Southern Hemisphere Wire-Wheeled Katana was born – the E27SZX.

Graham Crosby’s success on the racetracks had ensured Suzuki had 42 per cent of the New Zealand market. But the brilliant Honda CB1100R was coming, and it was coming for the head of Suzuki with a big, sharp, Japanese axe.

Hysterical Kiwis made unseemly demands, and Suzuki listened. Pops Yoshimura allegedly made the cams, the brake-lines were braided, Mikuni smoothbores were installed along with bigger-diameter mufflers, and some lightweight spoke rims topped off the new package.

As it turned out, only 20 E27SZXs ever made it into New Zealand. Somehow, South Africa got 25, but no-one is even sure if that was meant to happen.

So there were only ever 45 super-hot Katanas created and none of them ever made it Downunder directly via the factory. Sure, we got Katanas with spoked wheels, but they were not E27SZXs. Did that stop us telling lies about our Katana being a special Seth Efriken one? Not at all.

Suzuki stopped making the Katana in 2000. Which was strange but somehow fitting. The factory had kind of lost its way, and its Germans, and no-one seemed to be interested in Katanas with pop-up headlights, or a smaller 650 engine – except this one bloke I knew who loved his. But he was a submariner and already well down the road to total lunacy.

In 1981, Suzuki laid the groundwork for that lunatic road, set the world on fire, horrified the motorcycle press, and built the best bike in the world.

Shawn Giles on the 2019 Island Classic 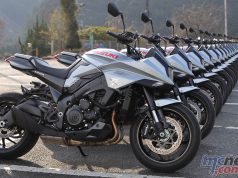 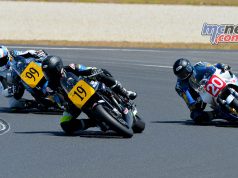 Shawn Giles on the 2019 Island Classic 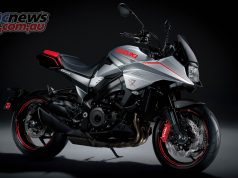