A total of 75 Yamaha Ténéré riders took part in the recent Tasmanian Devil Run which covered a lap of the apple isle on dirt roads and byways.

Around 1830km was covered by the Tragics during the course of the fiveday run on a range of machines from the first 1983 XT600ZL Ténéré to the latest 1200 twins.

The Ténéré Tragics even made headlines in Tasmania, the Run being covered by WIN TV News and The Mercury newspaper in Hobart when the Tragics pack made a stop at local Yamaha dealer, Horizon Motorcycles.

The Tasmanian Devil Run was unanimously received as the best Tragics Run in the event’s seven year history. The combination of fabulous riding on both tar and gravel roads, eye-popping scenery, superb hospitality and Tasmania’s enthusiasm for the tourism industry made this Tragics Run a ride to remember.

“I stated at the welcome dinner that this year’s Tragics Run would be hard to top, and that’s just the way it played out. Conditions were perfect, there were no major incidents – just one bruised wrist and some none too serious panel damage, while every Tragic that started the Run, finished the Run.”

MX legend Stephen Gall made his now annual Run with the Tragics and kicked off event proceedings with an ADV Skills Training Session for the Tragics before the evening’s official welcome dinner at Launceston’s Country Club Casino resort.

Yamaha Yamalube Factory Racing team Dakar Rally racer Rodney Faggotter took time out from managing his Centretune MCs Yamaha dealership at Longreach in central Queensland for a surprise visit to the event on the afternoon of day three.

Rod arrived at Lake Pedder Wilderness Resort in south-west Tasmania to take part in a special Q&A session with MX legend Stephen Gall. The Dakar Factory team member then rode with the Tragics for the final two days of the Run aboard an XT660Z Ténéré.

“YMA has supported the Ténéré Tragics from the first ride seven years ago and the event has become a pillar of our bLU cRU acitivities and a must-do event for anyone who owns a Dakar-inspired Yamaha. The camaraderie shown by this group of riders has to be experienced to really appreciate the fun to be Ténéré Tragic and Yamaha Factory Dakar rider Rodney Faggotter (left) and MX legend Stephen Gall enjoy the Tassie scenery had on these rides. Add in spectacular Tassie scenery and five days of sunshine and you have a recipe for motorcycling nirvana.”

The Truly Tragic Award was jointly awarded to two recipients for 2017, and is awarded to the Tragic who displays the true Ténéré Spirit during the course of the Run. This year it was Matt Parker-Charlton from Melbourne, and Colin Hayden from Dubbo.

Matt Parker-Charlton, from Melbourne, Victoria lined up for his first-ever Tragics Run aboard a 1983 XT600ZL Ténéré and his challenges started with a leaking head gasket and continued through the Run with fuel, electrical and sidestand issues. But through it all, Matt kept giving his legendary old beast the TLC it deserves and he completed every day and you could not wipe the smile off his dial.

Colin Hayden, from Dubbo, NSW is a 100 per cent Tragic and has ridden all seven Tragics Runs. Riding an XT1200Z Super Ténéré, Col and his posse of fellow Tragics from central NSW maximised their time in Tassie on the Run, by working in brewery tours, stops at oyster farms, bakeries, cafes, pubs and museums, and even the Ghost Tour at Port Arthur historic village, on their lap of the island

A number of additional awards were also recognised:

Rod Faggotter Recognition Award: Rocket Rod was asked to determine an award for the Tragic who caught his attention and it was little surprise he selected Chris Kirk from Mudgee, NSW, who rides an immaculately prepared Sonauto-replica XTZ750 Super Ténéré. The thundering blue beast moved Rod to comment, “If only I was born 20 years earlier, I could have raced Dakar on a bike like this!”

Most Kilometres Ridden to the Run Award: WA’s Odin Cann had a lock on this category, riding his XT660Z Ténéré all the way from Perth to Tasmania, and then home again. His three-week trans-continental Ténéré tour dé force should see him rack up almost 15,000km

Hard Luck Award: Queensland rider Keiron Jeffrey lost third gear in his XT660Z Ténéré on the afternoon of day two of the Run. He limped home some 70km to the next overnight stop at Port Arthur using just second gear. Word was immediately spread via David ‘Beak’ Murray on the ride Facebook page seeking a Ténéré for sale in Tasmania that Keiron could purchase to continue the Run. Multiple responses were received and ultimately Keiron was offered a Ténéré to loan from a enthusiast in Launceston, and he was able to limp his broken bike back to Launceston the next morning, climb aboard the loan Ténéré and rejoin the Tragics the next night at Lake Pedder to continue the Run. That’s the Ténéré spirit!

Oldest Tragic Award: At 65 years young, Victoria’s David ‘Beak’ Murray represents the timeless Ténéré Spirit. A former Australian Safari, off-road and road-race competitor, Beak rides a 1983 XT600ZL Ténéré and travels light, rolling out his swag at each overnight stop and revelling in the camaraderie of his Ténéré brothers. Beak is a former Truly Tragic Award recipient 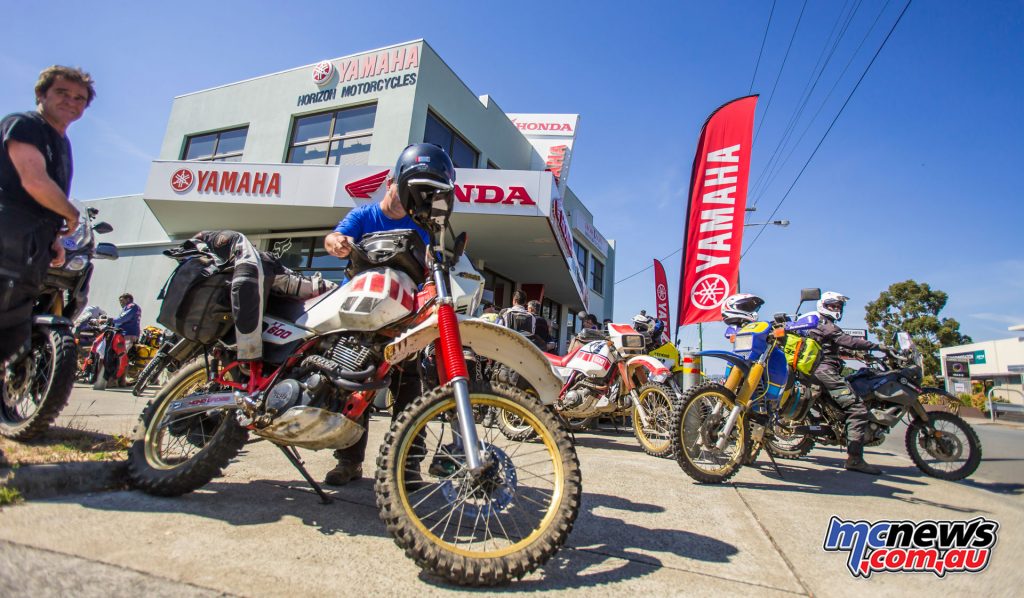 Details of the 2018 Ténéré Tragics Run will be announced soon.

Boris regales the pump and power of Jerez

Japanese and French victors at penultimate SX round