We went into Stage 2 of the 2022 Dakar Rally with Australian Daniel Sanders holding a three-minute lead and opening the stage, ahead of Pablo Quintanilla, Matthias Walkner, Adrien Van Beveren, and Sam Sunderland. Toby Price meanwhile suffered a navigation error that saw a P22 result for Stage 1, dictating the same starting position for today’s stage.

Stage 2 would provide a big shake-up of the front runners, as the challenge of opening the stage bit Sanders on his GasGas machinery, ending up on the wrong side of a canyon for the finish.

The stage saw Sunderland move into the overall lead from Yamaha’s Adrien Van Beveren, with Sanders dropping to third 3m29s off the leader in the provisional results before a 10-minute penalty pushed him down to seventh. Walkner, Howes and Lorenzo Santolino completed the top five, with Toby Price moving into 15th. Price now sits 32m48s off the front runner, having closed the gap significantly.

The second full stage also brought about some route changes, with downpours over the last days causing flooding, including washing out the Al Artawiyah bivouac for the Marathon stage, with the Stage 2 destination camp instead changed to Al Qaisumah, with the 338.43-kilometre special stage unchanged, mainly featuring dunes.

Daniel Sanders found himself on the wrong side of canyon nearing the end of stage two, and had to make a quick decision. Instead of turning back, he opted to jump his GasGas RC 450F clean over it to get himself back in the race, which, fortunately, worked. From there it was a hard charge to the finish line, however a 10-minute penalty saw the rider lose a number of places as the results updated.

“Today was pretty wild to begin with as it was pretty cloudy and the stage was super-fast early on. I had a good day going until after a fuel stop where I went down the wrong side of a canyon and lost a little bit of time. In the end I had to jump over it to get out of it but once back on the right line I pushed on to the finish. A little frustrating but I was able to make up some time in the dunes so all in all, not a bad day really.”

Toby Price’s second day at the 2022 Dakar proved a better one, with the Aussie building his pace throughout the day and fighting his way up the order. Completing the stage as fifth fastest, he earnt himself a strong start position for day three, where Price will aim to cut his deficit to the leaders once again.

“Today went a lot better than yesterday, and I was able to claw back a little time on the leaders. It’s always tough when you lose a big chunk of time early on, but it’s still very early days and there’s a lot of racing left. The bike is really good – I’m feeling really comfortable – so let’s continue tomorrow and see what happens.”

Joan Barreda started the day from a favourable position to attack, let no-one stand between him and his goal, completing the special with a surplus of five-and-a-half minutes over the stage’s nearest rider.

The final wrap up from Dakar 2022 – Results, reflections and regrets…

“I’m happy with today, especially after yesterday’s hard day, where several riders got lost. To make up time in the general standings is good, and we have to be aware that there are ten days ahead and that anything can happen. We are physically in good shape and we are looking forward to it. We have worked all year to get here in good shape, so now is the time to get it all out. I am also happy to be the third rider in the history of the Dakar with the most stage victories. I’m proud of the work I’ve done over the years and the mark I’ve left.”

Starting sixth on stage two of the 2022 Dakar Rally, Sam Sunderland put together a faultless display of riding and navigation to catch the front runners, lead the stage, and then bring his RC 450F Rally home in a fine second place. The strong result moves the Brit to the top of the provisional leaderboard.

“It was an interesting day today and it certainly went a bit more smoothly than yesterday, which is what I wanted. I started sixth and focused on just pushing hard to catch the leaders. There was some tricky navigation, but I figured out the way pretty quickly and caught up to Van Beveren. We then caught up with a few more of the leading guys so from there onwards we took it in turns to navigate and it was a pretty cool way to end the stage.”

Completing stage one in 14th place, defending Dakar Champion Kevin Benavides made the very best use of his starting position to make up time on his rivals. With his KTM 450 RALLY performing perfectly, Benavides was able to work his way up the rankings as the day progressed, moving into the top three by the halfway point. From there, the experienced Argentinian maintained a strong pace to the finish, ultimately claiming third, just under six minutes down on the stage winner.

“Today was a good day, especially after such a tough day yesterday. I started near the back and was able to push really hard. The special today was really fast in places, but also quite complicated – you had to know where to attack and where to focus on your navigation. It’s only day two and everything can happen at the Dakar – there are always ups and downs. I’m looking forward to the next few days.”

Starting the special stage as the 10th rider to set off, Skyler was quickly up to speed and chasing down the riders ahead of him, once again pushing hard but not taking any unnecessary risks so early on in the event. Enjoying the fast tracks and wet sandy conditions, the American was soon knocking on the door of a top-three finish, eventually bringing his FR 450 Rally home in fourth.

“The stage went well for me – I felt pretty comfortable riding on the wet sand. The dunes and the fast, sandy tracks were a lot of fun to ride, so today was really enjoyable, especially after some of the stresses of yesterday. I felt like I rode at a pretty good pace, and I’m happy with my result. It puts me in a good position for stage three, so I hope I can maximise on that. My focus is just to keep putting in solid rides, and make sure that I stay focused on the navigation. Overall, I’m really happy with how today went.”

Joaquim Rodrigues of Hero Motosports was sixth, behind Toby Price, with Stefan Svitko of the Slovnaft Rally Team seventh.

Maintaining excellent form Adrien Van Beveren entered the high-speed special in fourth, and used his superior navigational skills to open the stage together with the other leading riders. Maintaining his strong pace throughout, he ultimately completed the stage as the eighth fastest competitor, advancing to second in the overall provisional classification.

“I’m happy about today’s stage, it looks like our navigation strategy has paid off again. My priority over the stage was to keep checking the road book and making the right changes of direction while still keeping a good pace and it has worked well. I have a good start position for tomorrow, so I will try and continue doing what I have been doing for these first two days and stay focused. It’s only been two stages so there’s a long way to go.”

It was also a positive day of racing for Andrew Short who, after a difficult first stage where he fell foul to a tricky note in the roadbook, clawed back 10 minutes on the provisional leader at the close of stage two. Completing the special as the ninth fastest rider ensures a beneficial starting position for stage three, where the American will once again focus on reeling in the riders ahead of him.

“Today went a lot better for me. My speed was good and the terrain was awesome. Very motocross-style in between the wide-open sections and overall it was just a great day on the bike. After refuelling I did make a small navigational mistake but otherwise today was much more positive and I’m looking forward to tomorrow.”

Tech3 KTM Factory Racing’s Danilo Petrucci suffered a technical issue early on in the stage that brought his day to a premature end.

Tonight the Dakar convoy congregates at the Al Qaisumah bivouac due to the proposed Marathon bivouac at Al Artawiyah being washed out by heavy rains.

Stage 3 has also been affected due to the change of today’s bivouac. Race organisers yesterday decided to cancel the first sector of the special, so riders will not have to complete the 368-kilometre timed stage. The first riders are expected to arrive back in Al Qaisumah at approximately 13:00. 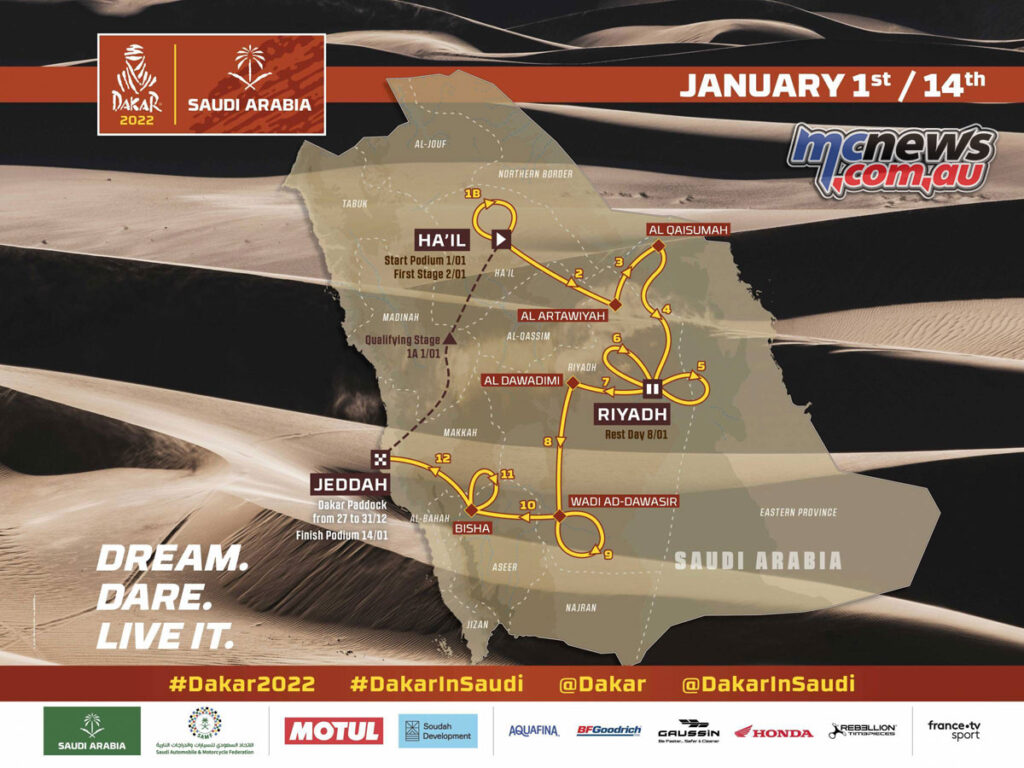