Yamaha Australia recently staged a series of promotional nights around the country ahead of the pending arrival of the eagerly anticipated new Ténéré 700 adventure motorcycle this December.

Reports in from events held across the country have hailed the tour a success with up to 100 members of the public attending each event. Showcases were staged in Mackay, Brisbane, Newcastle, Sydney, Melbourne, Hobart and Adelaide. There is one event left on the tour calendar for Australia and that happens this Saturday, July 27th, at the Esplanade Hotel in Fremantle. The tour then hits New Zealand next month with visits to Auckland, Wellington and Christchurch, click here to check pending dates.

MCNews.com.au recently attended the Melbourne leg of the journey and witnessed the enthusiasm for the new Ténéré 700 for ourselves.  Despite being held at the Park Royal Hotel adjacent to Melbourne airport, with its parking problems and peak hour concerns, dozens of eager fans of the new bike jumped at the chance to get up close and personal with the Ténéré. I bumped in to a couple of fellas who had made the trip down from Wangaratta to attend, a return journey amounting to almost 500 kilometres, how’s that for keen!

Yamaha royalty was in attendance to entertain the eager throng ahead of the machines unveiling with four-time Mister Motocross, amongst many other titles and successes in just about every facet of motorcycling, Stephen Gall, one of the headline acts.

Current Factory Yamaha Dakar Rally rider Rodney Faggotter was interviewed by Gally about the experience of racing Dakar, before Faggotter himself then took us through his bespoke WR450F Rally machine.

Dripping in carbon-fibre and unobtanium it was an object of keen interest. Looking as trick as a MotoGP bike built for the desert, it was a definite highlight for me, it just radiated ‘special’.

Some of the other inanimate stars present on the night included some beautifully restored examples of the marque from yesteryear.

Andrew Clubb, known as Captain Tragic for his role in organising the annual Ténéré Tragics rally events, imparted his knowledge of Ténéré history and took us around the room. First stop was a 1983 Ténéré XT600Z. The original (34L) Ténéré sported a massive 30-litre fuel tank and was powered by a kick-start only 595cc single.

We then moved on to a 1988 Ténéré XT600Z which had the Yamaha model designation 3AJ. A much more modern looking machine that really established the Ténéré look. For the sake of us that are not the most skilled in the dark art of kicking big singles into life, it came with electric start. A small screen offered the rider a little more protection while the way ahead was now illuminated by twin head-lights.

Whoa nelly! Then it was on to the big girl! Rally racing speeds had been getting crazier and crazier and Yamaha came to the party with a new twin-cylinder Super Ténéré known as the XTZ 750. This generation of the machine took Yamaha riders to much Dakar success. There was an audible collective gasp around the room when it was noted that a particular XTZ 850 R factory Super Ténéré, ridden by Yamaha Dakar Rally legend Stephane Peterhansel, held an astonishing 105 litres of fuel! The men of the modern Dakar are hard enough now, but I don’t know how those boys racing in those earlier days fitted their balls on the bike!

The reminiscing at the older models also took be back to the 1994 XT600E I owned in the mid 90s. It was the twin-carb YDIS model fitted with a big aftermarket Acerbis tank on it that fuelled my explorations around the back-tracks of Western Australia back in the day. I will have to dig some old photographs out of the shed one day and reminisce a little more on some of my own early adventures.

With the history lesson observed, and appreciated, it was time to turn our attention to the stars of the night that the public had come to see. Yamaha staff whipped the covers off three new Ténéré 700 models, all fitted with various levels of accessories and options.

Attendees were invited to jump aboard and try the machines on for size themselves and they didn’t need to be asked twice.  People enjoyed the chance to try out the seating position and standing riding stance.

Those concerned about the 870mm seat height were talked through the optional low seat and suspension lowering kits. After feeling how slim the machine is between the knees, some attendees had their height reservations put to rest after finding it amenable enough for their stature.

With 240 mm of ground clearance, and 210mm of suspension travel, the seat height is never going to be cruiser like.

Tipping the scales at 187 kilograms dry, or 204 kilogram with all fluids,  including a full 16-litre fuel tank, the new twin-cylinder Ténéré 700 is actually lighter than the outgoing single-cylinder Tenere 660.

Of course the heart of the machine is the parallel twin engine derived from Yamaha’s very successful MT-07 street-bike. I remember back to riding the first M-07 almost five years ago, at the national launch of the model, my initial words after my first stint on the bike was ‘right, how long do we have to wait for the adventure version?’

It was clear from that first experience of this engine that it would be an absolutely fantastic power-plant for an adventure bike.  I got my answer a year later when Yamaha debuted the first T7 prototype at the EICMA show in Milan. It has been a long three years since then waiting for Yamaha to complete their development process in readying the Ténéré 700 for volume mainstream production.

We still have a little longer to wait as Yamaha will not officially fire their twin-piston broadside into the middleweight adventure-touring marketplace until this December. It will land priced at $15,499 +ORC.

Clearly then they have not simply shoehorned the original MT-07 engine into a chassis from another model in order to rush to market. Instead they have followed their regular thorough 4-5 year new model development cycle.

The chassis is all-new and the bike has been rigorously tested across the world and put through endless hardships before Yamaha signed off on the final specification for the machine.

Yamaha also indicated that instead of giving us a powerful animal of an engine, and then having to tame it with electronics, instead they have worked hard on the power delivery of the engine to give the rider a natural feel at the throttle, and a linear enough torque curve so that no traction control system would be necessary.

The 689cc parallel-twin delivers a claimed 73 horsepower at 6000 rpm and 68 Nm of torque peaks at 6500 rpm. For the rigours of off-road use the cooling system is much larger than what is fitted on the MT-07.

The high-tensile steel diamond frame is also a design specific to the Ténéré and tips the scales at 17.75 kilograms complete with a double-braced head-stock. It is also broken down into various parts so that even in a major crash only parts would need to be replaced, rather than having to write off an entire frame.

Rod Faggotter also helped with development work on the machine and Yamaha took some of his feedback seriously enough to make some late changes to the design. Particularly on the fine settings of the adjustable KYB inverted forks and monoshock.

It is nice to see how many details have made it across from that first T7 prototype such as the stark quartet of LED lights up fron,t and the screen definitely has those rally styling cues.

From the cockpit the vertically oriented digital dash also helps deepen the rally style experience. A  12-volt outlet is standard and a crossbar sits above the instrumentation to provide a mounting point for accessory navigation options.

Yamaha also had a range of other Genuine Accessories on display that included fog light set-ups, adjustable levers, bar risers, and various extra protection items such as a headlight guard. An alloy bash-plate is standard fitment for the Australian market.

The ‘Tech Black’ Ténéré 700 was in full-fruit touring guise. The alloy side cases will set you back almost $2000 when keyed alike and the mounting system is added to the bill. A more comfortable passenger seat is a $344 ask while the centre-stand commands a $455 premium. The more comprehensive engine protection bars cost $424 while the accessory fog lights and requisite bracketry will set you back around $940.

By far the trickest looking machine was the ‘Ceramic Ice’ coloured variant which was set-up more akin to how I would like my Ténéré 700 fitted out if taking one home.

Aural pleasure is a big part of the overall riding experience for me and somehow I would have to find the $1149 for the optional Akrapovic muffler, which also improves the look of the machine. A rally seat ($596) also features on this machine along with a radiator guard ($197), chain guard ($130) and headlight guard ($173). The 908RR Dunlops complete the ready to rock the dirt look.

A range of ‘Yamaha Technical Wear’ will be launched later this year which will feature gender specific adventure apparel including adventure jackets, pants and gloves.

All in all the Trans Tasman Ténéré 700 Tour seems to have been an overwhelming success for Yamaha. 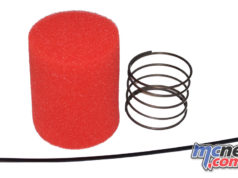 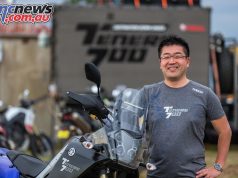 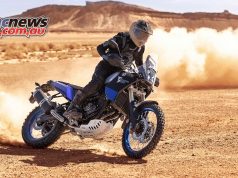 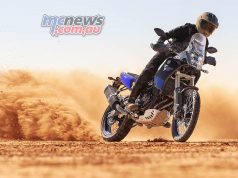