Misano welcomes back World Superbike for Round 7

After a one year absence, the eni FIM Superbike World Championship returns to the Misano World Circuit “Marco Simoncelli”, for the seventh round of the 2014 season. The Italian track made its debut on the WSBK calendar back in 1991, when American Doug Polen (Ducati) dominated the field claiming the pole position and taking the double, on his way to his first world title.

The track underwent a major modification at the end of 2006, when the racing direction changed from counter-clockwise to clockwise. The following year the circuit was renamed “Misano World Circuit”. The current 4,226m layout features six left corners and ten right handers.

Of all the riders involved in the championship, only Jonathan Rea (Pata Honda World Superbike) has won at Misano before in the Superbike class. The British rider edged out Michel Fabrizio in race two at the finish line to claim his maiden victory in the series in 2009.

Despite a difficult performance at Sepang a fortnight’s ago, Rea is still third in the standings and only 22 points shy of championship leader Sykes. Like 2nd place Sylvain Guintoli (Aprilia Racing Team), who is just 13 points from the top, Rea took the most out of the reigning champion’s DNF in the first encounter to limit the damage and maintain a strong position in the title race.

On the other hand Guintoli did not manage to fully capitalise from Sykes’ unlucky crash in race one, as his teammate Marco Melandri twice edged him out to secure a crucial double win. The Italian rider finally made it to the top step of the podium as a factory Aprilia rider, narrowing the gap to the top from 88 to 54 points.

Tom Sykes (Kawasaki Racing Team) has never been in the top 3 at Misano, despite being the pole-sitter in the last editions. The Englishman has recently undergone medical checks on his right wrist and leg, after the unlucky three way collision started by his teammate Loris Baz in the first encounter at Sepang, which brought down the reigning champ too. Sykes was fortunately diagnosed with no major damage and is ready to resume his title defence.

Davide Giugliano (Ducati Superbike Team) had one of the best races of his WSBK career at Misano in 2012, as he led the first outing for five laps before being overtaken by race winner Biaggi and second place Checa, eventually finishing third.

Eugene Laverty (Voltcom Crescent Suzuki) is looking forward to the second Italian round of the season, after returning to the podium for the first time since the season opener at Sepang. The last win by a Suzuki rider at Misano dates back to 2008, when Max Neukirchner beat Troy Corser by half a second at the finish line in race one. Laverty is no stranger to winning at Misano however, having won in WSS in 2010.

MV Agusta had a disappointing time in Sepang with Claudio Corti failing to finish either race. Corti will not be the only rider to race an MV Agusta F4 RR at Misano, as Swissman Michael Savary (Dream Team Company) will make a one-off appearance aboard the 4 cylinder Italian machine.

BMW had a second rider in the points in Malaysia as Hungarian Imre Toth scored both his and Team Toth’s maiden WSBK points in their debut season.

The battle for the ultimate prize in the EVO class continues at Misano with many potential protagonists hoping to shine in front of the Italian crowd. The seventh event of the season sees the return of reigning STK1000 champion Sylvain Barrier after a long recovery following a road accident. Two wildcard riders will try to mix it up in the battle for honours in the category, as former WSBK full timer Matteo Baiocco (Grandi Corse by A.P. Racing) and current Italian Superbike leader Ivan Goi (Barni Racing) will take to the track astride their respective 1199 Panigale R machines. 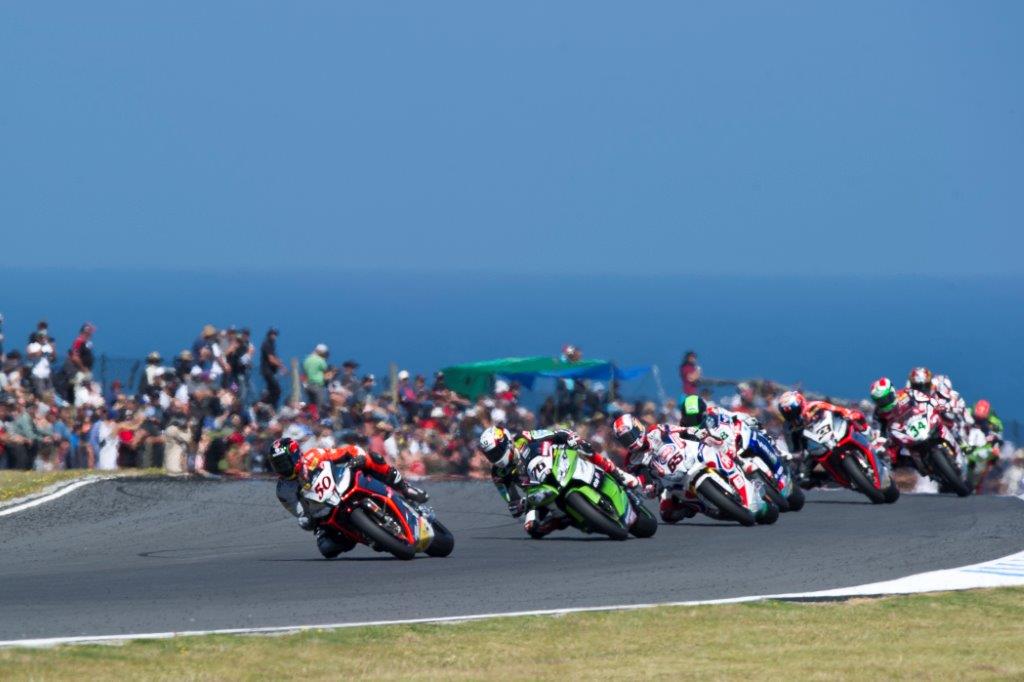 Michael van der Mark (Pata Honda World Supersport) heads the WSS field at the halfway point of the 2014 season. The young Dutchman scored his third win of the season a fortnight ago at Sepang, getting the better of Jules Cluzel (MV Agusta Reparto Corse) by only 18 thousandths of a second at the end of an enthralling race and exciting last lap. Van der Mark now holds a margin of 33 points over the Frenchman, who is now second in the standings ahead of compatriot Florian Marino (Intermoto Ponyexpres Kawasaki).

Marino lost a lot of ground in the title fight as he crashed out of the Malaysian race. Scotsman Kev Coghlan (DMC-Panavto Yamaha) also left Asia with no points and he is now tied in fifth with Lorenzo Zanetti (Pata Honda World Supersport), 55 points behind the leader.

Kenan Sofuoglu (Mahi Racing Team India Kawasaki) sits in sixth with 62 points to make up from the top, after beating Roberto Rolfo (Team Go Eleven Kawasaki) for third at Sepang. The three time World Champion came out victorious in the last WSS race held at Misano two years ago by defeating Cluzel, who was on Honda machinery at the time.

Argentinian Leandro Mercado (Barni Racing Ducati) currently heads the STK1000 standings after two podium visits in the opening three races leave him 7 points clear of his team mate Ondrej Jezek. Jezek himself has been on the podium twice, taking the victory, the Czech rider’s first ever, last time out in Imola.

Team Pedercini have five riders contesting this year’s FIM Superstock 1000 Cup. Lorenzo Savadori was on course for at least a podium last time out until a technical problem ruled him out, the Italian is currently 3rd overall, 19 points off the lead of Mercado.

A historic maiden victory on home soil for Kevin Valk (MTM Racing) has elevated the Dutchman into a strong 4th overall one point ahead of the consistent Matthieu Lussiana (Team Garnier by ASPI) and Fabio Massei (EAB Racing Ducati) who took his first ever podium in Imola.

Another rider to keep an eye on is Romain Lanusse (Pedercini Kawasaki) who returns to STK1000 action after replacing the injured Luca Scassa in WSBK at Donington Park and Sepang.

With a win at Assen and a second place in Imola, Finland’s Nikki Tuuli (Kallio Racing Yamaha) is looking good at the top of the standings, but with a win in the opening race, followed up by his second victory of the season last time out, Italy’s Marco Faccani (San Carlo Team Italia) is just 2 points shy of the Yamaha rider.

Faccani’s team-mate Andrea Tucci and Dutch rider Wayne Tessels (Wayne’s Racing Team Suzuki) are level on points in 3rd place overall courtesy of a strong start to the season that has seen them both on the podium and fighting hard at the front on more than one occasion.

Luca Salvadori (Team 10 Lap Racing) has been consistent in the opening three races so far with a 4th position his best result, while fellow Italian Kevin Manfredi (Agro-On Wil Racedays Honda) grabbed a maiden STK600 podium at Assen and is currently 6th overall in the current points table behind Salvadori.

After taking a brilliant 3rd place in Imola, VFT Racing’s Stefano Casalotti will arrive in Misano full of confidence and is certainly one to watch as are former race winner Gauthier Duwelz (MTM Racing Team) and Adrian Nestorovic (MVR Racing) who are yet to show their full potential.

With half a dozen local wildcard riders expected to join the fray, expect another all action race in Misano in STK600.

Two wins and a 3rd in the last three races, together with a 4th in the opening round leave last year’s EJC runner up Augusto Fernandez (WIL Sport) with a 6 point lead over compatriot Javier Orellana (Europe Food SL) as the fight to become this year’s PATA European Junior Cup champion resumes at Misano.

Spanish riders have so far dominated the 2014 championship, winning all four races in what is always a closely contested affair.

Marc Miralles (Construccions J.Miralles) won in Aragon but after finishing only 6th at Donington Park at the end of May is now 17 points behind Fernandez in the standings.