by Trev
in Australian Pro MX, Motorcycle News, Motorcycle Racing
A A
Share on FacebookShare on TwitterShare

CDR Yamaha Monster Energy Team’s Dean Ferris has successfully defended his Thor MX1 title with yet another dominant display of racing at the ninth round of the 2018 Pirelli MX Nationals at Gladstone, Queensland, today.

Ferris wrapped up the 2018 championship with victory in the opening moto in Gladstone and went onto complete yet another double victory. 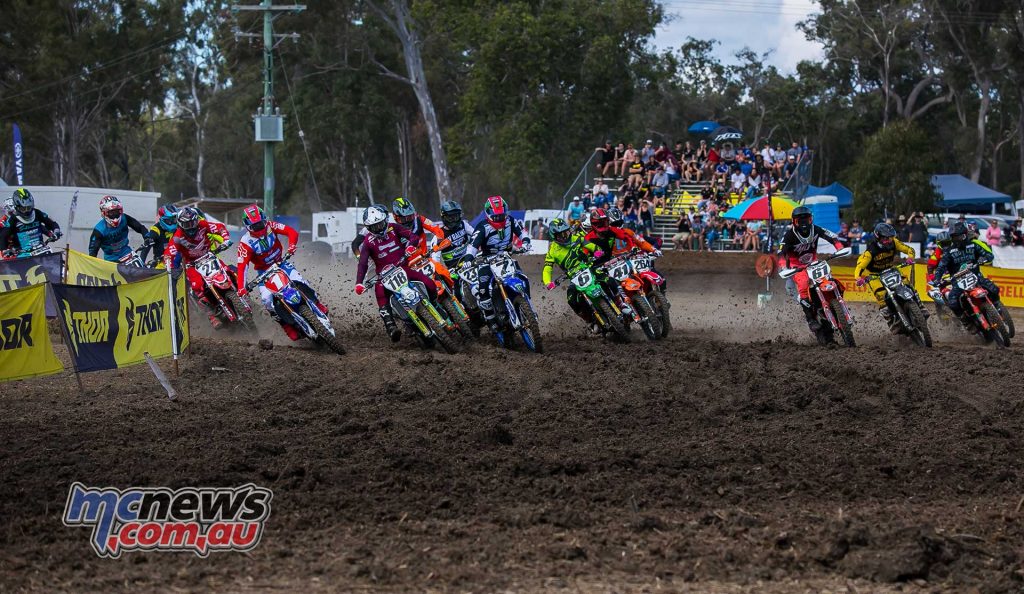 Despite carrying a 106-point lead into Gladstone, Ferris proved from the outset he meant business.

He topped the qualifying sheets, then quickly took command of the opening race, eventually leading a hard-charging Metcalfe across the line by 3.2s and wrapped up the championship with three races in hand. 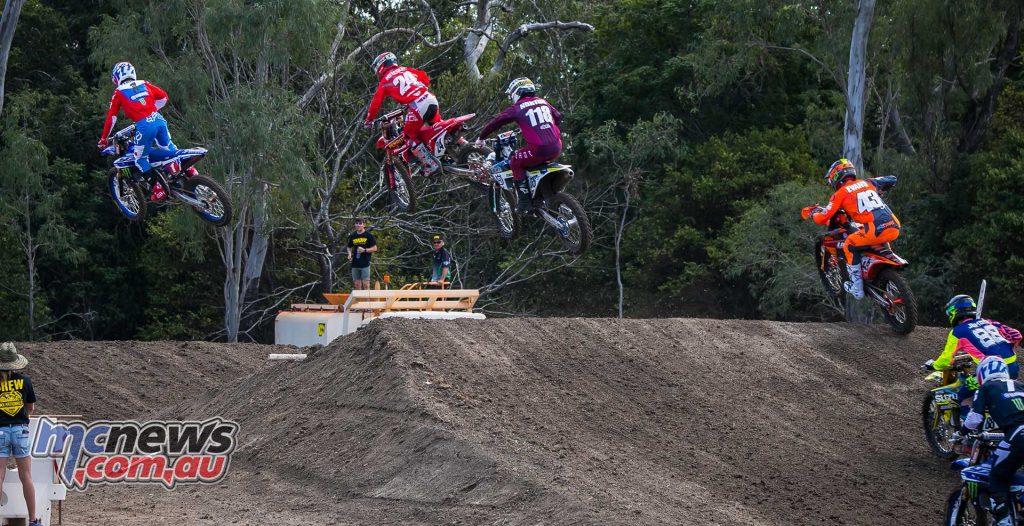 In the second Thor MX1 outing, Ferris continued to pour salt on the wounds of his rivals by grabbing the holeshot and leading wire-to-wire.

Caleb Ward was a career-best second at his home race ahead of Brett Metcalfe but on the overall results Metcalfe bested Ward by two-points to take second for the round.

The battle for the championship win is over though, Dean Ferris a deserved champion after a season that saw the 27-year-old dominate in an amazing fashion.

Ferris’ win record this season has seen him victorious 14 times out of the 18 races held thus far this season. His poorest result has been second place, and he suffered that relative indignation only four times.

KTM’s Mitch Evans is now second in the championship but there is only nine-points separating him from fellow KTM rider Luke Clout.

Brett Metcalfe’s improving late season form has seen him move up to equal fourth with Yamaha’s Dylan Long and with his Gladstone podium Caleb Ward is only a single point off that duo.

Yamalube Yamaha Racing’s former MX2 champion Jay Wilson broke through for his first round Pirelli MX2 round win since 2015 with an inspired ride around the Gladstone circuit in the Pirelli MX Nationals.

Wilson made the most of a consistent day of racing to stand atop the podium, flanked by both race winners, Hamish Harwood (Davey Motorsports KTM) and Wilson Todd (Serco Yamaha) after another round of scintillating racing.

In the opening MX2 race, championship leader Todd leapt to the front of the pack and led the field through the first handful of corners, before going down and having to muster a come-from-behind attack on his way to sixth.

Harwood was the ultimate benefactor from Todd’s misfortune as he raced to a 2.3s lead over Aaron Tanti (Complete Parts Kawasaki Racing) while Jay Wilson claimed third. 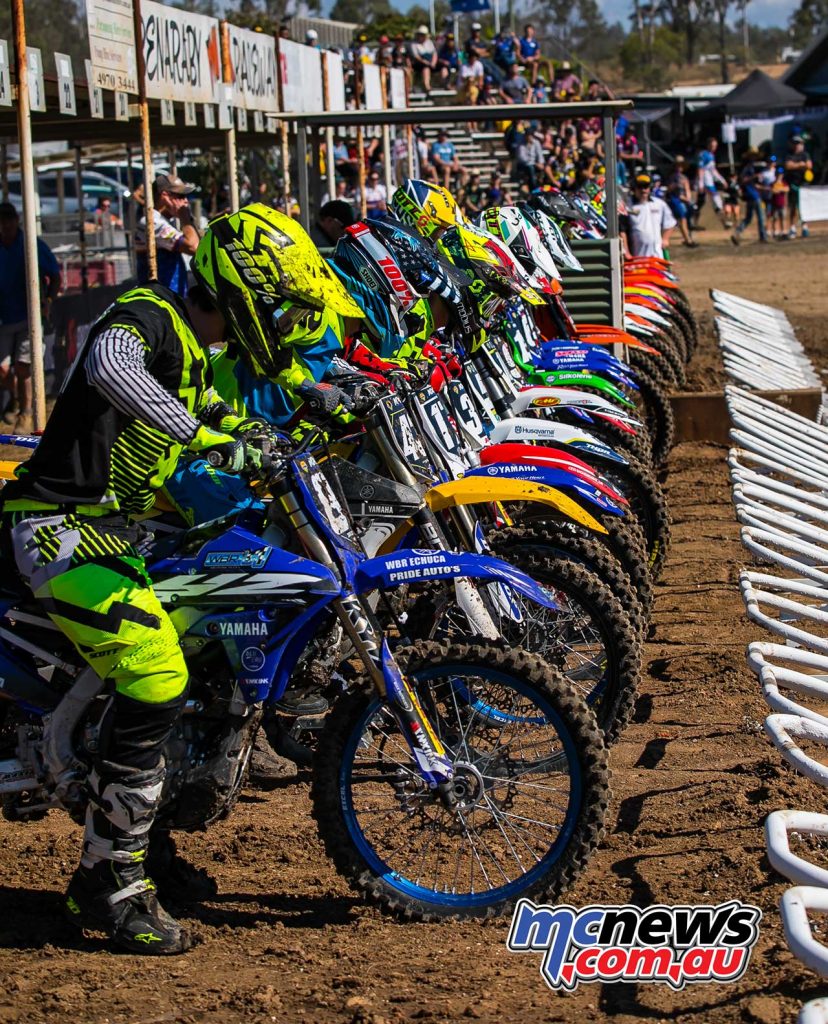 Todd made amends in the second MX2 moto by leading from gate-drop to chequered flag, but was kept honest all race by Wilson, with just 1.5s separating them at the finish-line.

Wilson Todd extended his championship lead to 57-points over Tanti while Hamish Harwood strengthened his hold on third overall with his strong showing in Gladstone.

Bulk Nutrients WBR Yamaha’s Bailey Malkiewicz has put daylight between himself and the rest of the Motul MXD field after an eventful day at Gladstone’s penultimate round of the 2018 Pirelli MX Nationals championship.

Malkiewicz put in one of his best rides this year on his way to a double-race win, while Jayce Cosford (Yamaha) and Riley Dukes (Husqvarna) rounded out the podium. 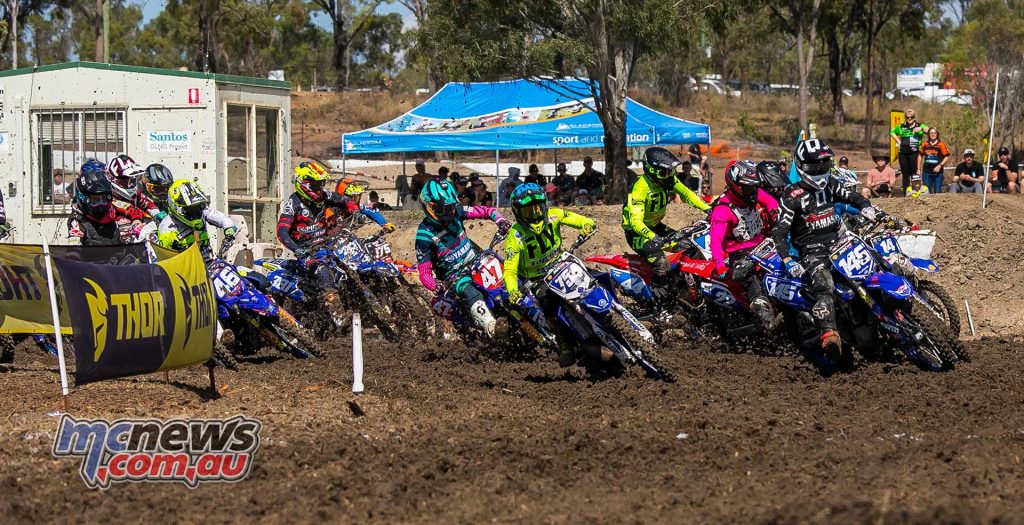 In the day’s first Motul MXD race Dukes took command of the race, before a mistake with three laps to go let Malkiewicz by and eventually finish with a very comfortable 22.2s buffer over Dukes. 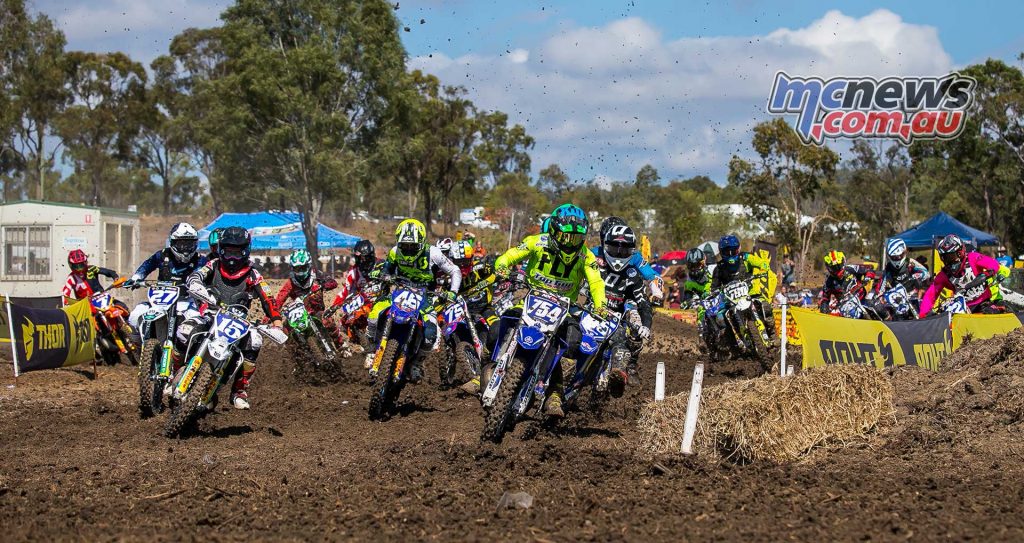 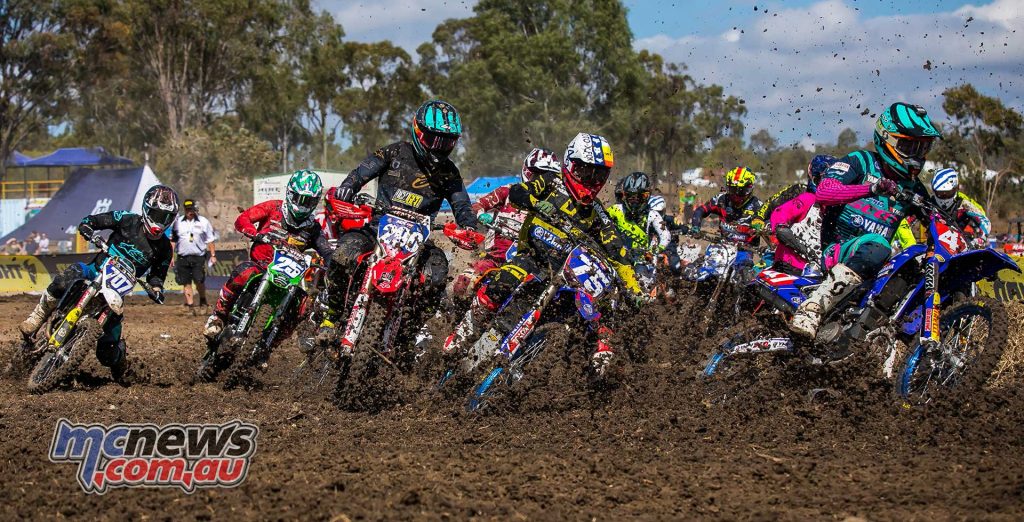 The second MXD moto was a tighter affair, with Malkiewicz coming from sixth place on the opening lap to hunt down race leader Rhys Budd (Honda) mid-way through the race. 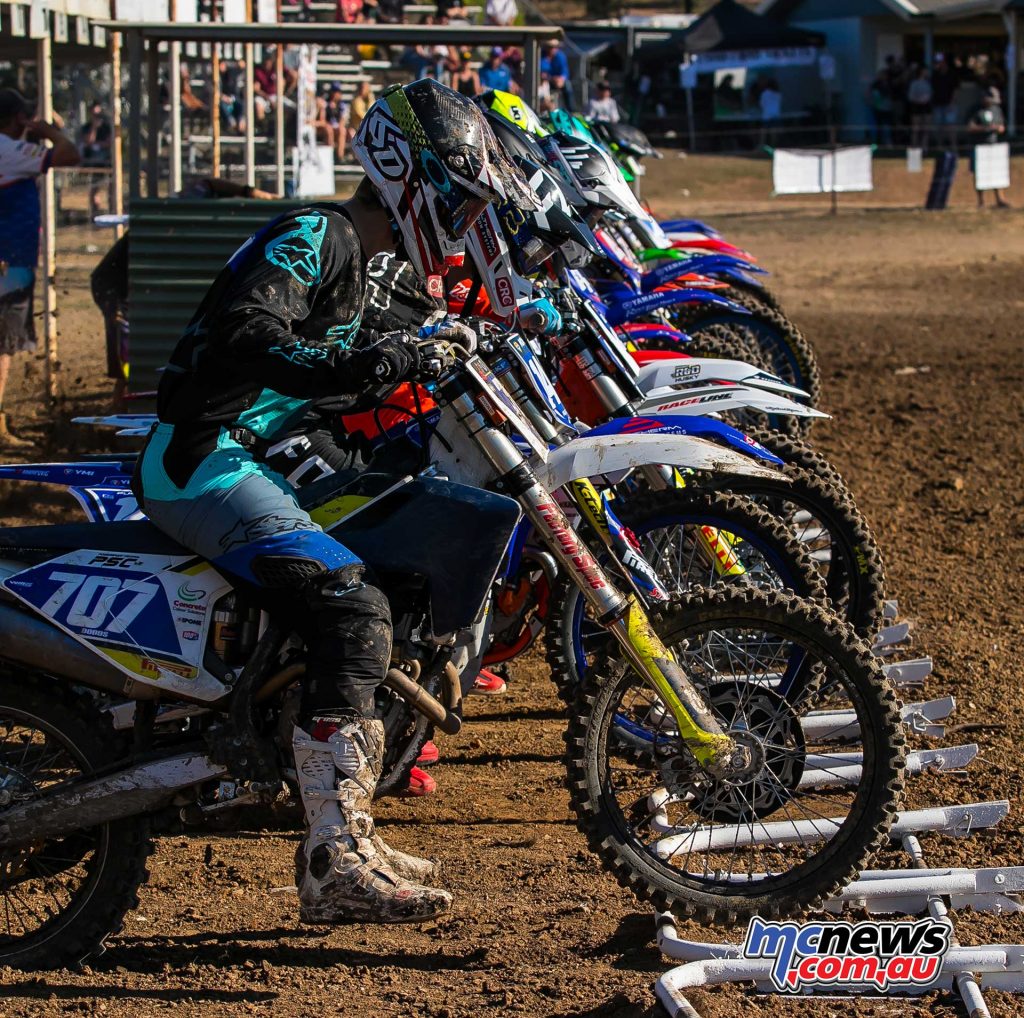 He eventually led team-mate Hugh McKay across the line by 4.2s, with Budd in third.

Cosford completed the moto in fourth and Bova fifth. 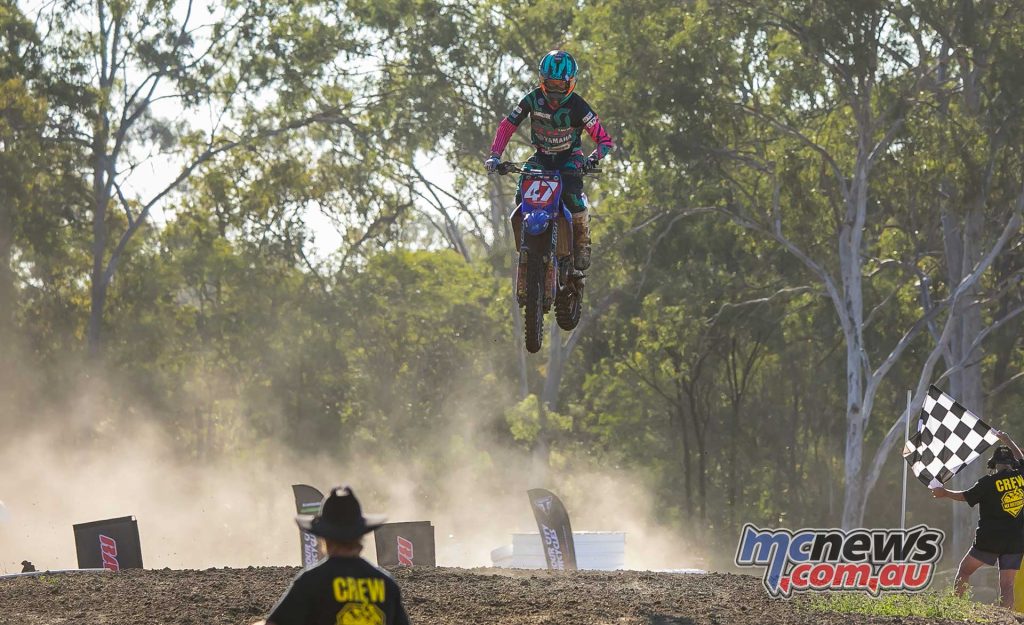 Things are tight at the top on the championship points standings. Bailey’s win promotes him in to the series lead with a buffer of only five-points over Hugh McKay. 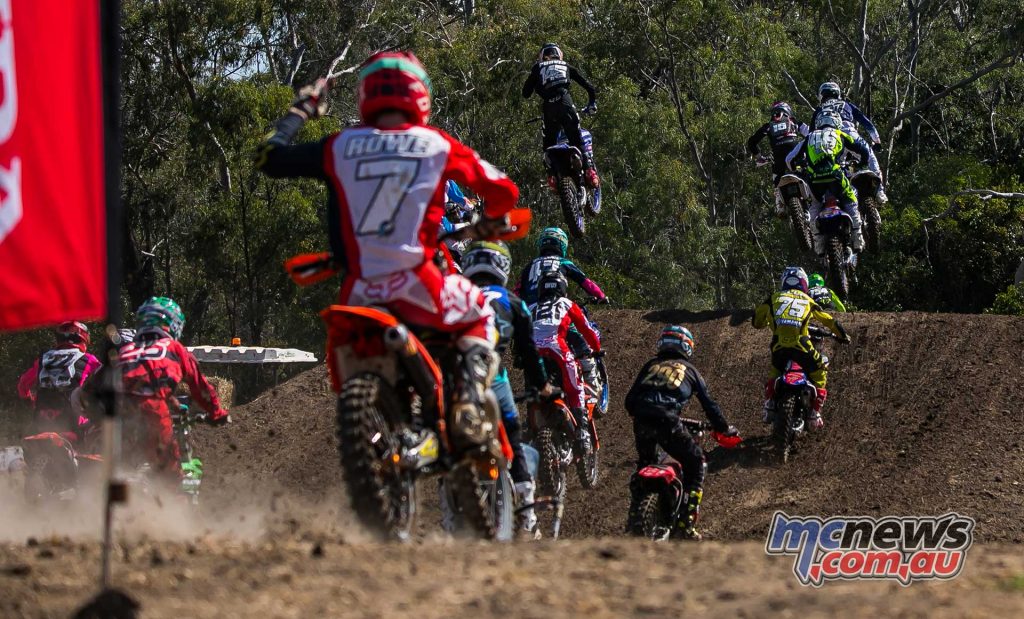 Rogers posted a 2-1 race result to beat Fox and Corben Weinert (Husqvarna) to the top of the podium, in what marked the final round of the junior two-stroke division.

In the final race of the day it was again Fox who led the field through for much of the moto, but a costly error on the penultimate lap saw Rogers pounce and take the race and round victory.

The final round of the 2018 Pirelli MX Nationals will be held at Coolum, Queensland next weekend, on 11-12 August.