The Asian Road Racing Championship’s 250cc Production class, AP250, is now in its fourth season and has been providing some of the closest racing on Planet Earth since the first outing at Sepang in 2015. In any race you can expect to see one second covering the first six to 10 bikes across the line.

Notable AP250 graduates include Thailand’s Nakarin Atiratphuvapat, currently in his second season in Moto3, Apiwat Wongthananon and Gerry Salim, who are now in the CEV Moto3 Junior World Championship and Galang Hendra Pratama, who is racing in World Supersport 300.

Weapons of choice this season are the gorgeous Honda CBR250RR, the Yamaha YZF-R25 and the Kawasaki Ninja 250R, though Manual Tech KYT is running the only potential race winning green machine.

RRC Chief Technical Inspector, Paul Dawson, who lives, works and races in Australia, outlined some key technical features, which are quite different to the Superstock type regulations for ASBK Production 300.

“There are a wide range of modifications allowed in AP250. As well as including all those permitted in ASBK, there is a free choice of ECU, bigger throttle bodies, head work, improved cooling and lighter aftermarket wheels. Like the other ARRC classes, however, they are restricted to controlled tyres and fuel.”

In the absence of a top Japanese rider in the intermediate class this season, a war is being waged between some of the best young racers from Thailand and Indonesia.

Although around 12 riders are capable of landing podium places on any given Saturday or Sunday, there are a few whose class marks them out as title contenders.

At the top of the list is Yamaha Thailand’s Anuparb Sarmoon, the only non-Honda rider consistently able to take the fight to the superior CBR250RR during 2017, finishing a close third in a final round showdown.

Yamaha has got back on even terms this year and Anuparb won the first race of 2018 in Thailand; his engine lost power in Race 2, forcing him to settle for fifth, but he came away at the top of the standings.

Muklada Sarapuech, riding for AP Honda Thailand took the Race 2 win at Chang International. It was her first victory in this hardest of lightweight classes, though she rose to fame as the Asia Dream Cup Champion in 2015.

Muklada’s speed and combative style is inspiring a new generation of female racers all over Asia and she is sure to win new admirers in Australia.

Both the top Thai riders have strong team mates around them who can make a difference when the last lap knuckle dusters start flying. Yamaha Thailand’s AP250 rookie for 2018, Kanatat Jaiman, put his own marker down in the first round by taking third place in Race 2, while 20 year-old Peerapong Boonlert claimed a brace of fourth places.

Indonesia has a wave of young riders chasing the successes of last year’s champion, Gerry Salim, and Galang Hendra Pratama. The most sensational of these is Astra Honda’s 14 year old prodigy, ‘Super’ Mario Suryo Aji, who set the field on fire on his debut at Chang International, qualifying third and finishing second in Race 1, beating his much fancied team mate, Rheza Danica Ahrens, into third place.

Others to watch are former Underbone champion, Rafid Topan Sucipto, and the highly rated Richard Taroreh.

Providing the only dash of greenery in a field bedecked with red Hondas and blue Yamahas is Andy Muhammad Fadly on the Manual Tech KYT Ninja 250R.

During the previous two seasons the 18 year-old Fadly’s hot-headedness got him into plenty of trouble with Race Direction and with his rivals, but there are signs that his outright speed can convert into better results this year.

Anuparb Sarmoon travels to The Bend on 36 points, a five point lead over Muklada and Rafid Topan, who in turn are five points clear of Peerapong and ‘Super’ Mario, who have 26 points apiece.

The last word goes to Supersport 600 wildcard, Broc Pearson. The 17 year-old, who saw plenty of Asia Production 250 battles during his two seasons in the Asia Dream Cup, commented.

“I think it will be a surprise to people when they watch the ARRC,” he explained. “The aggression in ARRC is completely different. They have a much stronger fighting spirit and some of the passes they attempt, we wouldn’t even think of. They are smart, fast and willing to put everything on the line for a win. I think what most people will love is the Underbone 150 class and AP250 class because the fighting and passes in both are crazy. We don’t quite have that in ASBK, so people watching at Tailem Bend will be on their feet for sure! In AP250 I think there will be a big group at the front, as there are many straights and the track is quite off-cambered with many blind corners. For someone to get the win, their aggression must be very strong, so my guess would be Anuparb for at least one victory.” 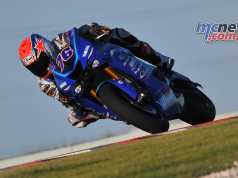 Asian Road Race Thursday Round Up from The Bend