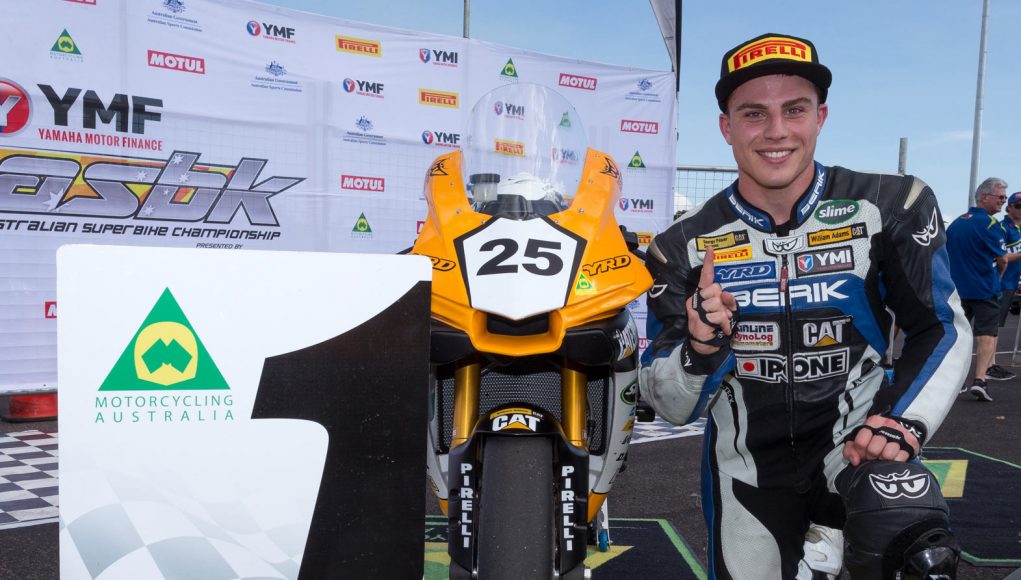 By Trevor Hedge – Images by TBG

Saturday got underway with Warwick Price putting the locals back on top in the NT Club Challenge, knocking Q1 quick man Matt Edwards (QLD) off top spot in Q2 to take pole position with a 76.80.

Joel Kelso’s 74.68 from the morning session stood the test of time in Moto3 / 125GP Q2 to secure the young Territorian pole position ahead of Dylan Whiteside and Dallas Skeer.

Taran Ocean topped the more populated 125cc sub-category ahead of Scott Topping despite not turning a lap in the afternoon session.

It was somewhat a cat and mouse game in the final Supersport 300 qualifying session this afternoon at Hidden Valley.  Multi-rider freight trains appearing at various points of the circuit as riders tried to tow each other around to a good time, while others tried to find some clear air to prevent anybody gaining a tow or seeing their race lines around the 2.87km circuit.

Oli Bayliss was content to rest on his Q1 time, and did not take to the track until there was 8 minutes left in the 20-minute final qualifying session. Jack Mahaffy joined him on track shortly thereafter, that pair had gone 1-2 in the morning qualifying session and still led the field on combined times.

Tom Edwards improved on his Q1 time to move up to third quickest while Billy Van Eerde had overtaken Max Croker as the leading KTM rider of the day. The latter rider failing to improve on his Q1 time.

The 30-minute Supersport Final Qualifying got underway at 1442 this afternoon and young Victorian Mark Chiodo was the first to improve on his Q1 efforts, the Triumph rider quickly lowering his marker on his third lap before then smashing it out of the park on his fourth lap with a 68.715, well below the previous lap record, to shoot straight to the top of the timesheets before returning to the pits.

Chiodo went out again later in the session but did not improve on that time, instead concentrating on fine tuning their set-up and approach to certain parts of the circuit.

Sam Muldoon, Damon Rees, Chris Quinn and Nic Liminton were the only other riders in the top ten to improve on their Q1 efforts.

Mark Chiodo – “It’s great to be back on pole, we left pace in reserve back in Qualifying One. I definitely thought I could be up the front again today and the result has proven that. We put it all on the line to get the pole today.”

Tom Toparis – “I feel really good, it’s a shame not to get pole but it’s still a great result. Hidden Valley Raceway has a long run down to the first corner so there could be an opportunity to get back in the lead there. It’s a positive outcome to be fighting back towards the front. I’m definitely keen for tomorrow’s race and I’m hoping to keep up our strong pace on Sunday!”

Ted Collins – “I felt really good, the NextGen Motorsports and Traction Control Suspension Team gave me a really good bike to ride. I didn’t feel quite as strong as I did in the second session as opposed to the first but I’m really happy overall. The top six are extremely close.

Triumph rider Matt Edwards ran away with the opening NT Club Challenge race with a clear victory over Douglas Clark and Warwick Price who rounded out the podium.

Fourth placed Andrw Steenberg Hamon crossed the line 20-seconds behind the race winner to claim fourth after the eight lap journey ahead of Patrick Hamon, Alex McWhinnie and Peter Troon.

Kim Rutherford, Bradley Le Suer and Nunzio Meta rounded out the top ten while Pete McCauley in 11th was the last rider to remain on the same lap as the leader at the chequered flag.

The final 30-minute Superbike qualifying session got underway at 1450 this afternoon with the ambient temperature hovering around 30-degrees but with slightly less humidity than the morning session.

The session was quite uninteresting for the most part, compared to the entertaining morning session. This afternoon none of the top 15 improving their times during the first half of the session.  Matt Harding then crashed at turn one, not a place you really want to crash, and officials quickly brought out the red flag. But the Kawasaki rider was able to return to the pits under his own steam. The interruption to the session allowing Superbike riders and their teams to further tweak their machines before heading out of pitlane again to complete the second half of this final qualifying session ahead of tomorrow two 17-lap races.

Pit lane reopened at 1512 and a few minutes later Bryan Staring was the first of the front runners to improve on his Q1 time, lowering his marker to a 66.65 to move one position further up the leaderboard.

Herfoss then improved his time by a fraction, and improved marginally again before returning to the Crankt Protein Honda garage for more tweaks to the new SP2 Fireblade.

Robbie Bugden then knocked two-tenths off his morning best to move up to fifth place on combined times before then going down at turn one. The Queenslander quickly rejoined and got back down to business.

Glenn Allerton put his head down, improving to eighth on the charts with a 66.89, gritting his teeth somewhat in his return from that awful arm injury the suffered at Wakefield Park early in the season.

The entire top ten were now in the 66-second bracket on combined times, but the question on everyone’s lips was, were we going to see the first ever 65-second lap by a motorcycle around the 2.87km Hidden Valley layout?

Wayne Maxwell lowered his morning time by a fraction on his 11th lap of the circuit, with only a few minutes remaining in this final 30-minute session.

Josh Waters then dropped in a 66.13 to shoot to the top of the charts, the others now had two-minutes to knock him off that perch.

Falzon then put in a blistering first sector on the final lap of the session, the young South Australian then was quicker again through the second split, and at the flag he took pole position with a 66.055.

A fraction off Maxwell’s 66.04 on Friday, but that was free practice, but those times do not count towards their qualifying positions for tomorrow.

Corey Turner had started to show more speed at Winton but the Queensland teenager has stepped up another notch here this weekend. A change to K-Tec branded suspension at Winton and here this weekend they have tweaked the set-up of the new suspension further and it is obviously paying dividends. However, Turner was one of the only riders in the top ten to not improve this afternoon, the others being Cru Halliday and Beau Beaton.

Callum Spriggs went down in Q2 with a fresh tyre in to try and promote him up the grid so the Ducati man will start from 16th on the grid tomorrow on his time from Q1.

Superbike competitors get before a brief ten-minute warm-up session at 0940 tomorrow morning before then gridding up for the opening 17-lap bout at 1140. The second and final Superbike encounter is slated to commence at 1455.

Daniel Falzon – “This whole weekend it’s been Josh Waters, Wayne Maxwell and myself, fighting towards the top, slightly ahead of all the others. I went out with ten minutes to go and planned it to perfection. Josh put in a fast lap in the dying minutes and I knew I had one shot to get the pole. It was a hectic lap, probably the most wild of my entire career! We put it all on the line to get that pole, that’s all that matters.”

Josh Waters – “That was a close qualifying session! I am really happy with the bike and the team, we do have the new spec bike, which has helped us get up there. Our main competition is very strong but I’m ecstatic to achieve the second place. We’ll see how we go tomorrow. It could be anyone’s game in top ten!”

It is quite amazing how much noise these relatively small bikes can make but when 33 of them roar off the start line in a tight bunch it is truly deafening!

Billy Van Eerde using the low rpm single-cylinder torque of the KTM, and his incredibly light weight, to lead the field around the first turns, but the twin-cylinder Kawasaki of Oli Bayliss , and similarly configured Yamaha of Tom Edwards, used their superior top speed to get the better of the young KTM rider early on lap two. Jack Mahaffy then pushed Van Eerde back a further position later on that second lap, as Tommy Edwards and Oli Bayliss traded blows at the front of the field.

Van Eerde then surprised them all by taking the lead again around the back of the circuit, the 14-year-old dirt tracker clearly a prodigious talent on the rise.

Jack Mahaffy took the lead with six laps to run from Tom Edwards while Tom Bramich pushed Oli Bayliss back to fourth. Croker then got the better of fellow KTM rider Van Eerde to move up to fifth place.  Later that same lap it was announced that Mahaffy was to be given a 10-second jump-start penalty, a heavy blow to this title aspirations in this tightly fought class.

The red flag then came out after four bikes went down at turn one, forcing the race to be declared. The results were then taken back a lap, to the end of lap six. Giving Tom Edwards the win ahead of Tom Bramich with Oli Bayliss rounding out the podium.

With the two classes of ‘up to 300’, and ‘over 300’ though it mate Tom Edwards the winner in the over 300cc category while Oli Bayliss celebrated victory in the under 300cc class.

Joel Kelso got quickly down to business in the final race of the day at Hidden Valley. The local young talent putting on a 74.71 on his third lap to pull away from Dylan Whiteside and Dallas Skeer. He then went quicker again, a 74.66 and continued to reel off laps in that 74-second bracket.

Dylan Whiteside sneaked a 74 in but could not maintain that pace, drifting back into the 76s, and not able to run with Kelso here today.

Scott Topping was the first 125 Grand Prix machine home. Taran Ocean had been the quickest 125 in qualfying but did not make Q2 or the race start.