By Trevor Hedge – Images by TBG and Half Light Photographic

Local youngster Joel Kelso continued his stellar Saturday race one (link), form through to Sunday at Hidden Valley with a strong victory over Dylan Whiteside and Dallas Skeer.

Whiteside found some extra race speed today and may indeed be able to challenge Kelso in the final bout later this afternoon. Kelso’s best in this race, a 74.316, was another new lap record for the weekend, but Whiteside was not far behind with a best of 74.682.

Tom Toparis got away well in the opening Supersport bout ahead of Ted Collins and Mason Coote. Polesitter Mark Chiodo had not got a great start and was chasing that trio after slipping past New Zealand’s Damon Rees.

Chiodo then dispatched Coote but after Toparis put in a great opening lap he had built a handy little buffer over his pursuers. Collins was the only rider that looked to be in with a shot of challenging Toparis in this bout, the two putting in a strong of low 69s. 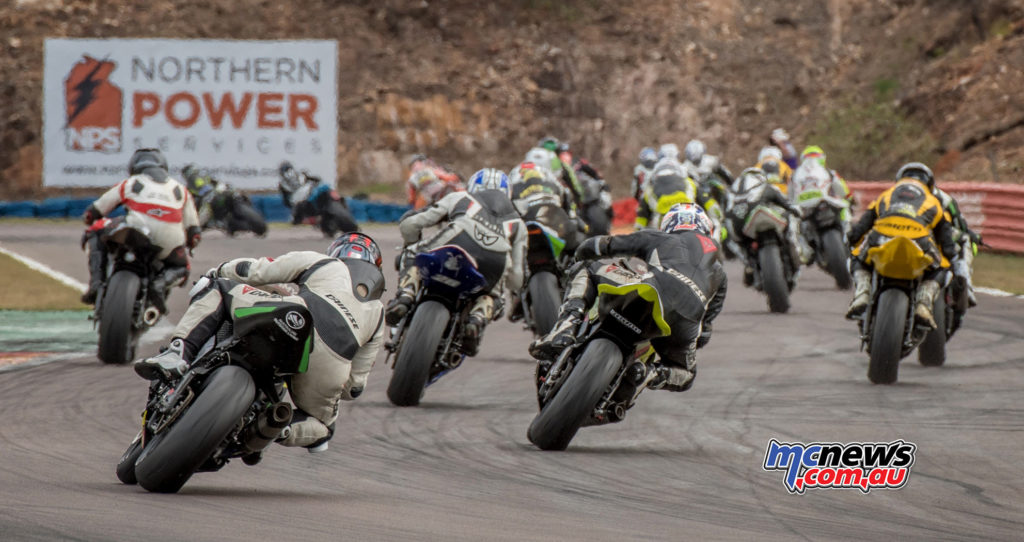 Their pursuers also got down to those time by lap four, but it was the scintillating pace right from the lights going out that decided how this race was taking shape.

Damon Rees had pushed his way past Mason Coote but that pair had started to lose touch with Chiodo, whose third position was starting to get a little lonely, he was two-seconds behind the leading duo after the opening few laps, and had been unable to claw that ground back.

At the front the gap between Toparis and Collins ebbed and flowed at around half-a-second, Collins clawing back a little at one point of the circuit, only for Toparis to then eke some ground back somewhere else on the 2.87km track.

Sam Lambert got stronger as the race progress, by lap ten he had sneaked past Mason Coote and Damon Rees to promote himself into fourth position. His next target was Chiodo, and he was reeling the young Victorian in…

It was at this stage of the race where that almost constant half-a-second gap at the front between Toparis and Collins grew to a full-second. The Goulburn teenager proved too strong, and went on to celebrate a 1.6-second victory over Collins.

Mark Chiodo ran off the circuit at turn 14 on the final lap while battling for third with Sam Lambert. The Triumph rider got going again but crossed the line in a disconsolate 20th position.  Handing Lambert the podium position, but then when Lambert’s ten-second jump-start penalty was applied that pushed the local back to sixth place, promoting young Kiwi Damon Rees on to the podium.

After the race I went down to the pits where I witnessed rider after rider visit Chiodo’s pit garage to complain about Lambert’s move on him, telling Chiodo he was robbed. Young Chiodo, himself, was fairly quiet and not in any remonstrating or complaining. The three men in his camp, father John, and long time tuners Gary House and Geoff Winzer, were also not complaining.

This trio have been around racing a long, long time, and have seen it all. Mark is part of the most powerful and influential family in the Australian motorcycle industry, but to his credit, they just keep their heads down and go about their racing, seeking no special favour. Young Mark is universally liked throughout the paddock, not because of his surname, but because he really just seems such a genuinely nice young fella.

Today, the consensus amongst all the riders I saw comment on the race was that, in their opinion, Lambert was racing dirty.

I am not prepared to comment on that verdict, I was not out there racing with them. But, in his defence, Lambert last year raced in the British Superstock 600cc category, where they really take no prisoners. Thus this is more than likely just how he has hardened his racecraft, in his web profile against the question, ‘toughest competition’, he answered British Superstock 600, with a note beside it saying ‘suicide’…  But, this bash and crash style of racing has made him universally unpopular among his fellow combatants here today.

None of that controversy should, however, not sour the briliant victory by young Tommy Toparis over Ted Collins and a brilliant result for young Kiwi Damon Rees, the son of New Zealand road race legend Tony Rees.

“Definitely very happy to get the win, it assists in the championship battle! The race went to plan and my lap times were very consistent. I did have a small moment midway through the race but I kept banging in the fast laps. Ted Collins might have been thinking championship and let me have the win but a victory is a victory. This has put us in a good position heading into Morgan Park. There’s plenty of spectators here and it’s been a great weekend!”

Billy Van Eerde again was the early leader in the first Supersport 300 bout of the day, the first race for this exciting category was staged on Saturday afternoon (Link), Tommy Edwards took a narrow victory over Tom Bramich with Oli Bayliss coming home third, but the victor in the ‘Under 300cc’ sub-category.

Max Croker declared his hand in this one, pushing through to the lead on lap three, but less than a second covered the top seven; Croker, Edwards, Mahaffy, Bramich, Van Eerde, Battye and Bayliss, in that order.

With five laps to run that top group were still nose-to-tail and changing positions at almost every turn. Two laps later though Edward, Mahaffy and Bramich had managed to make a small break. Oli Bayliss though decided he was not going to let them get away, putting in a brilliant 78.80, almost matching his pole time from yesterday, and the only rider to sneak into that 78-second bracket today, to close back up to that aforementioned trio.

At the chequered flag though it was Mahaffy by a nose over Tom Edwards while Tom Bramich rounded out the all Yamaha podium.  The first Under 300 category machine home was Oli Bayliss, who finished fourth outright ahead of KTM’s Billy Van Eerde and fellow Kawasaki rider Reid Battye.

Daniel Falzon capitalised on his pole position with a great launch off the line ahead of Suzuki’s Josh Waters and a fast starting Troy Herfoss.  The defending champion slipped past Waters late on the opening lap to move up to second position, the Suzuki man got him back early on lap two, and that tussle had allowed Falzon to escape from them a little, the South Australian youngster enjoying a full-second lead as they crossed the stripe to start lap three, a new lap record to Falzon on that first flying lap, a 66.097 scorcher to underline his pace around this Hidden Valley circuit.

Wayne Maxwell had got off to a shocking start, down in eighth place mixing it up with Robbie Bugden and Michael Blair. Maxwell’s teammate, Glenn Allerton, had been making his return to competition this weekend, but was ruled unfit to race today, his arm just not standing up to the heavy braking forces that racing at this circuit entails.

In stark contrast young Corey Turner was continuing to make his presence felt with the big boys, ahead of Bryan Staring, Robbie Bugden, Cru Halliday and Maxwell with 13 laps to run in this 17-lap encounter.

Falzon then threw away all his hard work, running off the circuit before rejoining in 13th place, a disaster for the championship leader, and the first foot he has put wrong all weekend. He looked to perhaps have lost the front at turn six, then in saving it had to run off the circuit. Now it was time for him to put his head back down and salvage as many points as he can…

Thus Josh Waters inherited the race lead, and had enough pace over Herfoss to push his buffer out to over a full-second. Two laps laters that gap was out to 1.5-seconds.

Bryan Staring had made his way up to third place, but was a further 2.4-seconds behind his teammate, and Corey Turner still a strong fourth while trying to stave off the advances of Wayne Maxwell.

Then the red flag came out… Two bikes went down a turn five… Falzon had clashed with Buckley, it looked as though Falzon perhaps lost the front while attempting to overtake. Both riders were down and hurt.

Racesafe were quickly on the scene and aiding the riders, who were both conscious, but had suffered heavy knocks and were obviously in plenty of pain. Buckley seemed to have came off worse, and it looked as though he may have sustained a fracture somewhere on a lower limb. (Later we heard it was most likely at least a broken ankle).

Lets do this again!  An eight-lap dash!

At the re-start it was Josh Waters that swept across to lead the race as he entered turn one with Troy Herfoss and Bryan Staring in close company.  The re-start clearly favouring riders such as Robbie Bugden and Wayne Maxwell who had suffered badly early in the first encounter.

Waters straight back down to race pace, a 71.72 from a standing start for the GSX-R1000.  Maxwell showed his determination with a forceful move on Bugden to take fourth place from the Kawasaki mounted Queenslander.

The first flying lap across the stripe rendered a 76.285 for Waters, giving him half-a-second buffer over Herfoss, Staring an equidistant third.

Herfoss was determined not to let Waters get any further away, matching Waters on 76.3 the next time around, then the pair clocking almost identical times again on lap four. 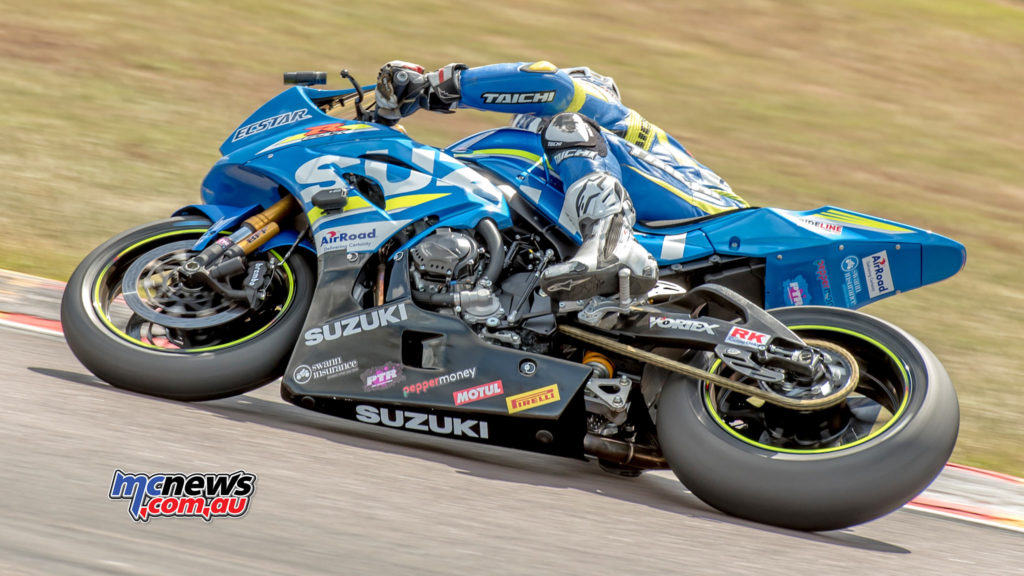 Wayne Maxwell had pushed his way past Bryan Staring and loooked to have the pace to match the two front runners, but he would need to find something more to broach that now 1.5-second buffer to Waters, and 7-tenths to Herfoss.

Maxwell had a sniff now… The YRT rider put his head down to clock a new fastest lap of the race, 66.228 on lap five, but this was now a shortened eight-lap affair… It looked certain he was going to be able to take the fight to Herfoss, but neither man looked likely to challenge Waters for the win. Staring though, had not been left behind as Maxwell charged his way forward the Honda man was coming along for the ride…

At the last lap board Waters had 6-tenths on Herfoss, who had four-tenths on Maxwell.  At the first split on that final lap Herfoss had closed on Waters, the gap down to four-tenths, held that gap through to the second split, setting up an exciting run to the finish line which saw Waters claiming victory ahead of Herfoss, Maxwell and Staring. 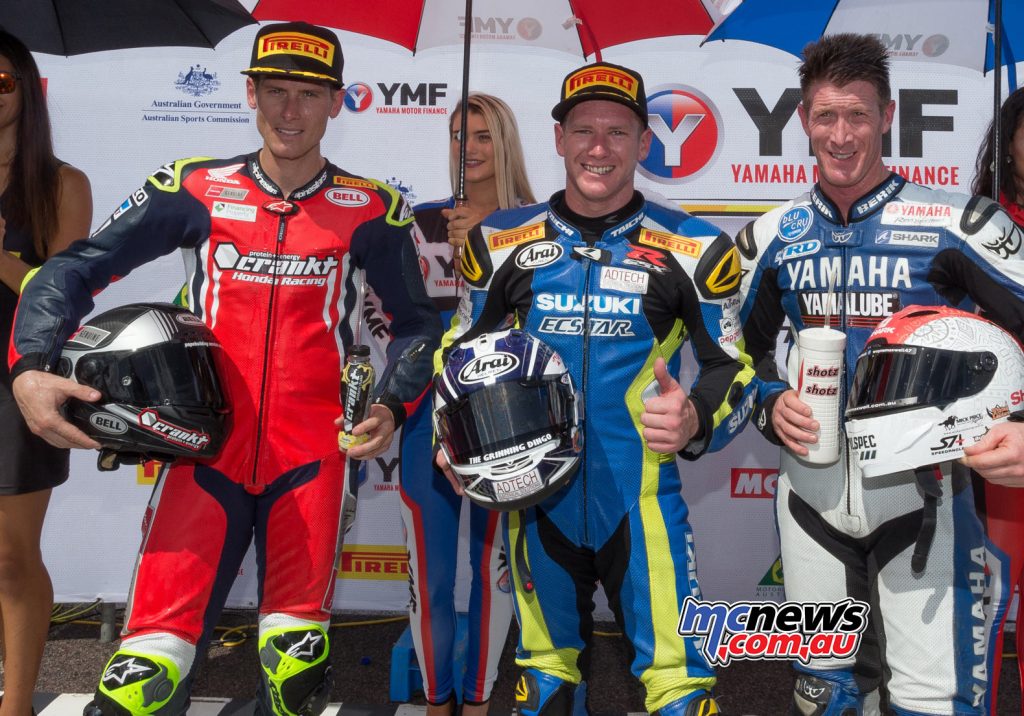 Robbie Bugden claimed fifth place while Falzon did extremely well to recollect himself after that massive incident in the first running of the race to finish sixth and claim good points.

Following the race Daniel Falzon was disqualified when race officials decided that he should not have been able to take the grid when the race was re-started after reviewing footage of the race. Falzon still gets to take to the grid in the second bout however, and from pole position no less. The young South Australian will be determined to make amends in race two.