Seven teams all with massive Speedway names, lined up on the start for The World Games (TWG) 2017 medals – only one took gold and it was Poland, who proved best on the Saturday evening. Australia took second place and Sweden claimed third.

The result came as news spread that Aussie internationals Chris Holder and Troy Batchelor have been sacked by SGB Premiership side King’s Lynn just one day after the cut-off date for club interchanges and signings. You can find the full story in this week’s Moto Wrap – Holder & Batchelor sacked by King’s Lynn (link).

Shortly before the opening gun, Polish trainer Marek Cieślak made the decision to start Maciej Janowski and Bartosz Zmarzlik, keeping Patryk Dudek in reserve. In the opening race of the competition, Sweden tied with Denmark 3:3. In the third race of the night, Poland faced Germany.

There could be only one favourite and he did not disappoint. Zmarzlik crossed the finish line ahead of the pack, with Janowski breathing down his neck. The boys in red and white were the only team to win their first round with 5 points.

The second series started with Germany falling to Australia 4:2. Sweden gained a confident victory over Russia (5:1) after which Poland stepped up to ride with Great Britain. In keeping with his plan, Cieślak rotated his riders, replacing Janowski with Patryk Dudek. The result was a terrific run and a 4:2 win, thanks in no small part to Zmarzlik’s furious charge to the wire. Dudek ended up third.

After two rounds, Poland was in the lead with 9 points. Sweden and Australia stood at 8 apiece.

The next race saw Denmark take down Russia, but not convincingly (only 4:2) in part because of Emil Sajfutdinow’s excellent ride. Australia, despite being one of the favourites, ended up tied with Sweden 3:3. Jason Doyle, currently atop the general classification standings of the Grand Prix, chocked up an excellent ride.

Meanwhile, Germany served up a shocker, smashing Britain – who was not so “great” – by a score of 5:1. The home crowd fans in the stands, by this point, were anxious to see their team in the next race, in which they would face Denmark.

This time Poland’s pair was again Janowski and Zmarzlik and thanks to some excellent riding and sliding, they handily beat their Scandanavian rivals 5:1. Zmarzlik was again the first to finish, while Janowski deflty parried the attempted attacks of Kenneth Bjerre.

In their fourth start, Germany was back to its surprising ways again, this time tying Sweden 3:3. In an all-Slavic match, Poland lined up against Russia with Zmarzlik and Janowski again to ride. This time the race ended in a 3:3 tie. The winner was Janowski, but Zmarzlik – despite his best efforts – found himself last in the pack. Australia took down Great Britain with another strong showing at 5:1. The only real problem was technical as Doyle’s chain broke just before the race’s start.

The four-series standings again favored the host nation with Poland out front (17 points) followed by Australia (16) and Sweden (14).

Continuing their run of surprises and in keeping with their bid to be the sensation of the night, Germany tied Denmark 3:3. After a disappointing tie with Russia, the Polish squad was anxious to make up ground in their race with Sweden. It was not to be.

Instead Janowski and Zmarzlik again tied their rivals as the latter took first, but the former finished last. Next Russia whipped the weaker British side 5:1. With Australia’s 5:1 win over Denmark, the boys from Down Under claimed the overall lead, one point ahead of Poland.

With a tie in their next race versus Great Britain, Sweden’s one man team of Fredrik Lindgren (alone because Antonio Lindback was disqualified) was assured of a spot in the rematch round.

Germany then tied Russia and with the following match between Poland and Australia would determine which team would advance directly to the final and which would face Sweden in the rematch. With Poland needing a win and Australia requiring only a tie, Polish trainer Cieślak decided to leave his pair unchanged and sent out Zmarzlik and Janowski.

Unfortunately, Janowski slipped onto the inside line with both wheels, which resulted in his disqualification. This left Zmarzlik alone on the track and although he rode fantastically, the resulting 3:3 tie gave the Aussies – already ahead by a point – a straight shot to the final. 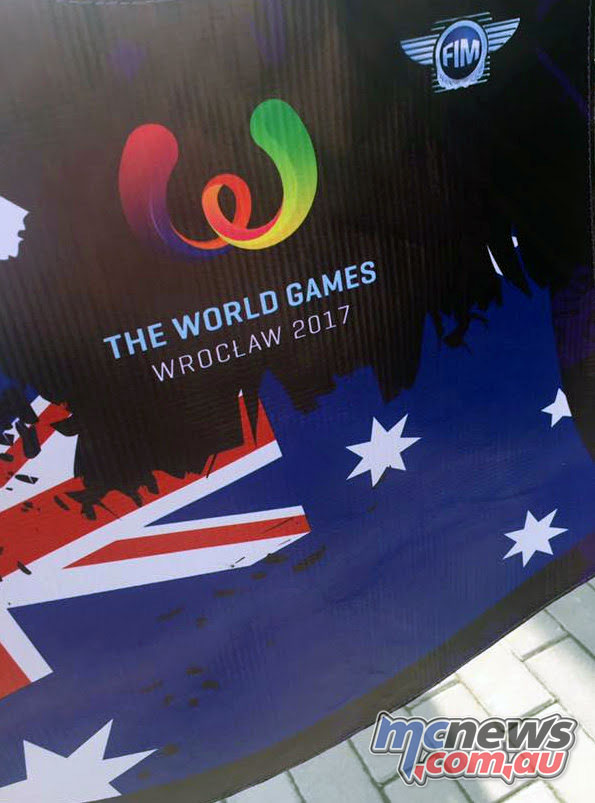 After 21 races the standings stood

In the rematch, Zmarzlik and Janowski stepped out against Lindbeck and Lindgren of Sweden. Poland’s riders got a quick jump out and led from the start. Unfortunately, Lindbeck counterattacked and salvaged a 3:3 tie for the Swedes. However, thanks to the fact that Poland had tied Sweden in the earlier round and both Polish riders scored in the race (an extra bonus), the host nation advanced to the final.

Bartosz Zmarzlik, Maciej Janowski, Jason Doyle and Max Fricke – four riders, two countries and one gold to gun for. Once again, the boys in red and white jumped out to an excellent start and found themselves one-two ahead of the Australians. And so they finished as well – with Zmarzlik ahead of Janowski – and fulfilled their dreams of capturing a gold medal.

In total, Zmarzlik won 20 points, Janowski 10 and Dudek 1. The silver medal went to Australia and bronze to Sweden.

Massive gallery of images from AMA SX Round Eight