Clarke and Spriggs shared the spoils in round two, with both riders scoring a race win and a third place, while other riders to finish on the podium were Luke Mitchell and Jack Gallagher (Race Centre YZF-R6).

“I got a good start and then it was kind of hard to go fast because none of us have had a dry session yet this weekend. I was feeling pretty good and I just tried to go fast straight away. I was hitting all my lines and managed to pull a few seconds on the first three or four laps. I didn’t have a pit-board or a lap-timer to see how I was going, but I looked across on the straight and saw that I had a gap and just kept going. I am just really happy to get my first win at Phillip Island and finally get the top step of the podium. The bike worked great and the tyres weren’t spinning too much, so it finished off as a good day.”

Supersport first-timer Tom Toparis showed he will be a threat in the future as he rode to a strong fifth-place result on Sunday in the dry. He didn’t contest the opening race as he didn’t have a back-up bike with wet settings available.

“Race two was really good for my first proper 600 race. The track was still very cold this morning, but it turned out to be a good day. I had a great battle with Robbie and Chiodo, ending up fifth, which I’m really happy with! It’s a shame I only got in one race, but it’s all good. A huge thanks to mum and dad, also Ben Henry for making the weekend possible.”

Stephanie Redman also deserves a special mention for dominating the first half of the opening Supersport race in wet conditions after she showed the boys a clean pair of heels and cleared off into the distance. Unfortunately three laps from the chequered flag Redman went down and did not get to taste the champagne but it was still a brilliant performance.

Three Supersport races had been scheduled for the weekend but only two were contested with Friday afternoon’s race cancelled due to an extreme weather event at Phillip Island. 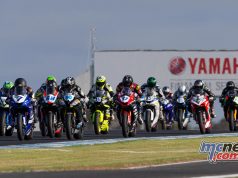 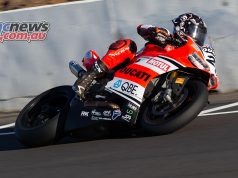 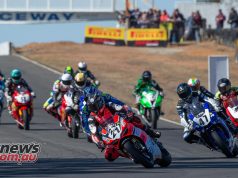