This is the 27th successive year that the Circuit de Barcelona-Catalunya has hosted a Grand Prix event; it was first included to the Grand Prix calendar in 1992, and below are some facts and statistics related to the previous GP events at the circuit:

The last time that Spain did not have at least one GP winner across the three classes at the Catalan Grand Prix was 2002.

A total of 78 Grand Prix races  have been held at the Barcelona-Catalunya circuit since 1992 as follows:

Ducati have taken three MotoGP™ wins at the Catalunya circuit, including their very first in the class with Loris Capirossi in 2003 (of which it’s 15th year anniversary on the opening day of the 2018 Grand Prix). The last win for a Ducati rider at the Catalan GP was last year with Andrea Dovizioso. 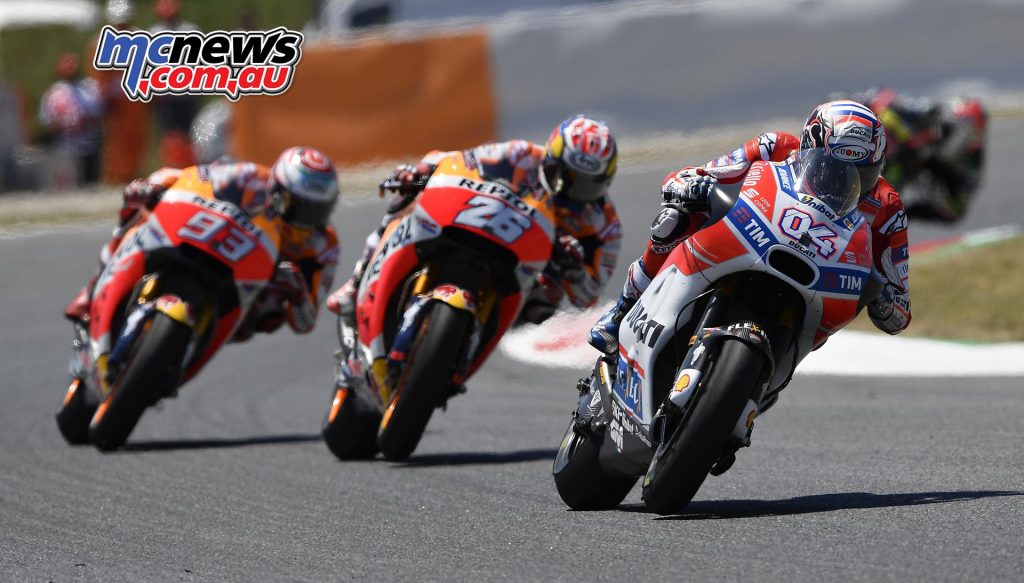 The last win by Suzuki at the Catalan GP was in the 500cc class in 2000, with Kenny Roberts. In 2016 Maverick Viñales’ fourth place equaled the best result for a Suzuki rider at Montmeló since the introduction of the MotoGP class in 2002, which had previously been achieved by John Hopkins in both 2006 and 2007.

Aleix Espargaró started from pole two in 2015 at Catalunya; the first pole for Suzuki since Chris Vermeulen took the top qualifying spot at the Dutch TT in 2007.

The eight Moto2 races that have taken place in Catalunya have been won by six different riders: Yuki Takahashi (the only victory for a rider riding a Tech3 bike so far), Stefan Bradl, Andrea Iannone, Pol Espargaró, Tito Rabat, Johann Zarco and Álex Márquez. The only rider who has more than a single Moto2 victory at this circuit is Johann Zarco, who won in 2015 and 2016. Only two of them have not won from pole position: Yuki Takahashi (2010) and Andrea Iannone (2012).

With his win in Mugello, Jorge Lorenzo moves above both his teammate Andrea Dovizioso and Phil Read into fifth place in the following list of riders with the longest winning careers in Grand Prix Racing. 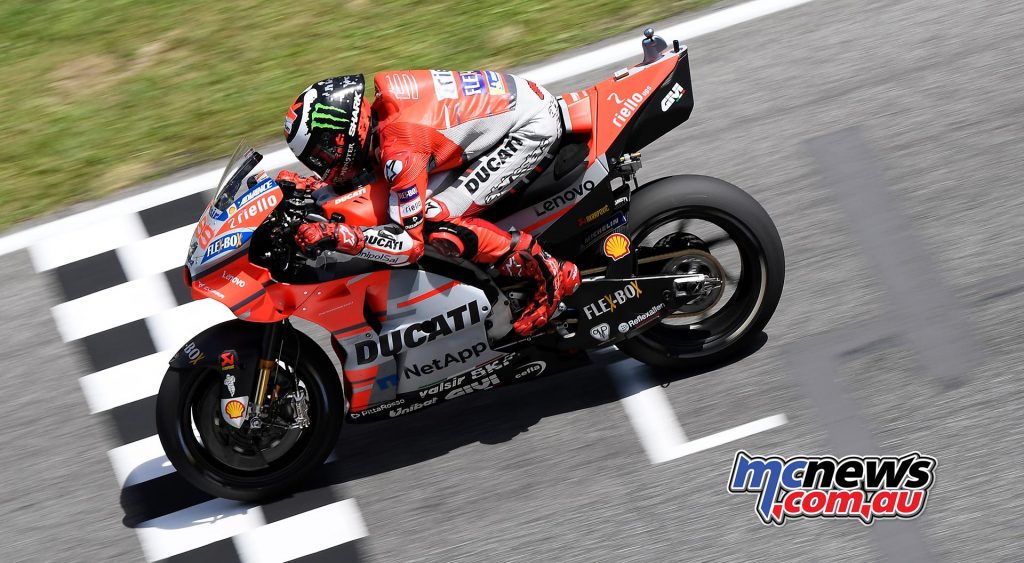 In addition to extending his winning career as shown above, Jorge Lorenzo’s win at Mugello is significant for the following facts:

Jorge Lorenzo became the second rider in the history of Grand Prix racing to win with both Yamaha and Ducati, along with Loris Capirossi.

Jorge Lorenzo became the sixth rider to win on a Ducati, equalling the number of wins of Andrea Iannone and Troy Bayliss.

Jorge Lorenzo’s win at Mugello was the 41st in the premier class for Ducati and the 45th in all solo classes of Grand Prix racing, equalling Moto Guzzi.

Jorge Lorenzo took 24 races to win with Ducati. Only two riders took fewer races to stand on the top step of the podium with Ducati: Capirossi with six races and Casey Stoner with only one.

This was just the fourth MotoGP™ win for Ducati in Italy, adding to Casey Stoner’s victories at Mugello in 2009 and at Misano in 2007, and Andrea Dovizioso’s victory at Mugello last year.

Jorge Lorenzo’s win at Mugello was his 111th podium finish in the premier class, just one less podium finish than Dani Pedrosa (112) who’s second on the list of riders with the most podium finishes in the class – behind Valentino Rossi (194).

This was the 149th time that Jorge Lorenzo has stood on a podium across all classes. In Catalunya, he will be aiming to become the fourth rider to reach the milestone of 150 podium finishes in Grand Prix racing along with Valentino Rossi (230), Giacomo Agostini (159) and Dani Pedrosa (153), and the second Spanish rider to do so.

The 0.043s between Jorge Martin and his teammate Fabio Di Giannantonio across the line of the Moto3™ race at Mugello is the 5th smallest ever time margin covering the podium and the third at this track (only races that have completed full race distance are considered for inclusion in the following table):

Following Mugello, Marc Márquez leads the MotoGP™ Championship standings with a score of 95 points. This is the lowest score for a rider leading the Championship after the opening six races of the year since the current points scoring system was introduced in 1993.

76 points cover the top 15, which is the smallest margin covering the top 15 riders in the premier class after the opening six races of the season since the current points scoring system was introduced in 1993. 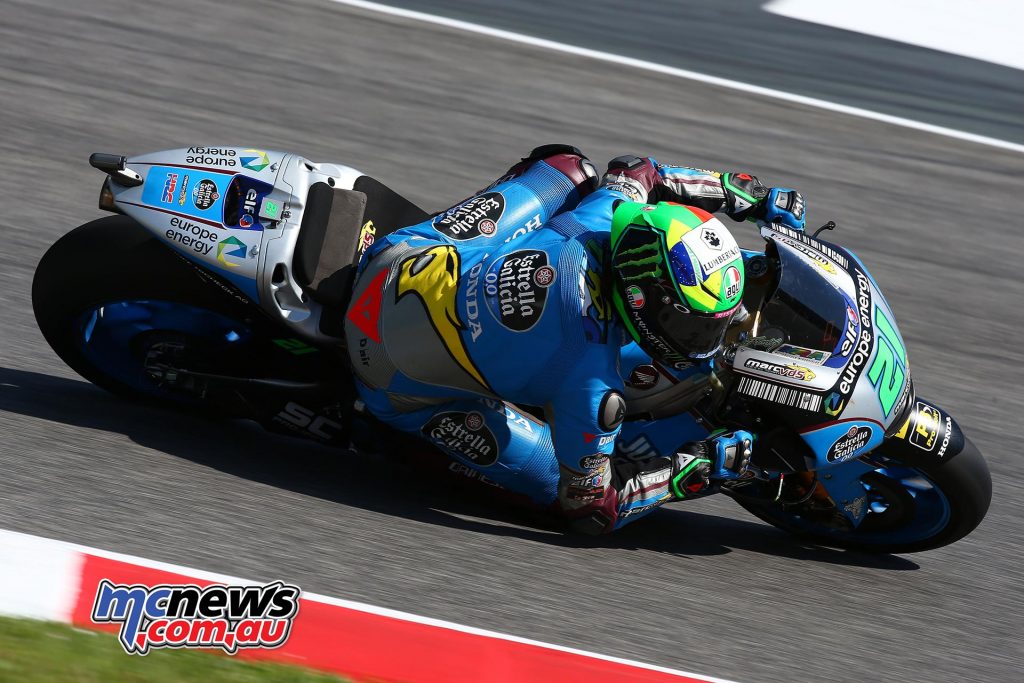 At Mugello, Franco Morbidelli finished 15th, crossing the line just 26.644 seconds behind race winner Jorge Lorenzo. That’s the fourth closest top 15 of all-time in a full length premier class Grand Prix, after Qatar 2018, Aragon 2017 and Australia 2017.
Jorge Lorenzo was the fourth different rider to win a MotoGP™ race this year, making it the second successive year there were four different winners in the opening six races of the year.

At Mugello, Andrea Dovizioso stood on the podium for the second time this year after his win in Qatar. This was his 85th podium finish of his Grand Prix career, moving him above Anton Mang into 15th place on the list of riders with the most podium finishes.
With Jorge Lorenzo and Andrea Dovizioso, this is the first Ducati 1–2 on the Italian soil since the Nations Grand Prix at Monza in the 125cc class back in 1958 when the top five riders across the line were on Ducati.

Valentino Rossi finished in third place at Mugello, becoming the first rider in the history of Grand Prix racing to reach the milestone of 5000 points scored in the premier class, with 5005 points. His closest rival is Dani Pedrosa with 2882 points.

At Mugello, Valentino Rossi has stood on the podium for 230th time in his Grand Prix career and the 194th time in the premier class, on what was his 371st Grand Prix start.
Valentino Rossi is the most successful rider across all Grand Prix classes at the Catalunya circuit with ten victories (1 x 125cc, 2 x 250cc, 1 x 500cc, 6 x MotoGP™).

The next most successful, with five wins, is Jorge Lorenzo (1 x 250cc, 4 x MotoGP™).
Jack Miller crashed out of the race at Mugello, meaning only two riders have scored points in all six races in 2018: Maverick Viñales and Danilo Petrucci.

Maverick Viñales has scored points in the last 16 successive races. The last time he failed to score any points was in Assen last year when he crashed out on the twelfth lap.
Marc Márquez crashed at Mugello and restarted to cross the line in 16th, meaning he didn’t lead at least one lap for the first time since Malaysia last year.

At his home Grand Prix in Catalunya, Pol Espargaró is scheduled to make his 200th Grand Prix start, becoming the second-youngest rider (27 years 7 days) to reach this milestone behind Sandro Cortese (26 years 284 days).

Ten different riders have already stood on the podium after the opening six races of the season, the first time this has happened since 1999.

Yamaha riders have not won since Assen last season with Valentino Rossi (16 successive races), which is the longest sequence without a win since the 18-race sequence that included the last two races of 2002 and the 16 races of 2003.

Hafizh Syahrin finished 12th at Mugello and he is now leading the fight for Rookie of the Year with 17 points. But he’s tied with Franco Morbidelli, who scored one point at his home track.

At Mugello, Miguel Oliveira won for the first time since winning the final three races last season. This is his fourth win in the Moto2™ class, equalling Mika Kallio, Álex Rins and Maverick Viñales, and his tenth overall. Last year at Montmeló, Oliveira crossed the line in third from seventh on the grid.

Joan Mir crossed the line in third at Mugello, which is the first back-to-back podium finishes of his rookie year in the Moto2™ class. He won his fifth Moto3™ race last year in Barcelona.

Championship leader Francesco Bagnaia was fourth in Mugello. He finished 13th last year in Barcelona from 20th on the grid, which is his worst qualifying result so far.

Fifth across the line in Mugello, Álex Márquez won his second Moto2™ race last year at Catalunya from pole position, which was the 60th victory for a Spanish rider in the class. Along with Miguel Oliveira, he is the only other rider on the current grid who has stood on the podium at this track in Moto2™.

Only three riders have scored points in all six races of the Moto2™ races in 2018: Francesco Bagnaia, Miguel Oliveira and Joan Mir.

Mattia Pasini, who crashed out at Mugello, crossed the line in second last year at Catalunya, but he was later disqualified for a technical infringement. Along with Joan Mir, Mattia Pasini (125cc – 2005), Álex Márquez (Moto3™ – 2014), Danny Kent (Moto3™ – 2015) and Jorge Navarro (Moto3™ – 2016) are the four other riders currently racing in Moto2™ who have won in the lightweight class at this circuit.

Joe Roberts, who scored points at Mugello for the first time since his first Moto2™ race at Brno last year, will celebrate his 21st birthday on qualifying day at Catalunya.

Jorge Martín won for the fourth time in his Grand Prix career at Mugello, becoming the most successful rider on the current Moto3™ grid, ahead of Niccolò Antonelli and Arón Canet.

Jorge Martin’s win at Mugello was the first for a Honda rider at the track since Maverick Viñales back in 2012 on FTR-Honda.

Martín started from pole last year in Barcelona, crossing the line in third for his fourth podium finish of the season.

Second across the line at Mugello and top KTM rider, Marco Bezzecchi stood on the podium for the fifth time in Moto3™, equalling John McPhee’s podium finishes in this class. He crossed the line in 14th last year in Barcelona, which was the best result at that time during his rookie year.

Fabio Di Giannantonio stood on the podium at Mugello for the 10th time in Moto3™, becoming the rider with the most podium finishes without a win in the class.

Gabriel Rodrigo finished in fourth place at Mugello, which was his best result since he was also fourth in Australia last year. Rodrigo has failed to score any points in Barcelona so far.

Arón Canet was 11th at Mugello, which is his worst result across the line since he was also 11th last year in Argentina. In Montmeló last year, he qualified second but was demoted to fifth on the grid.

None of the riders currently competing in Moto3™ have ever won at Catalunya. Along with Jorge Martín last year, Enea Bastianini is the only other rider on the grid to have stood on the podium at this track with two second places (2014–2015) and a third place (2016). He started from pole position at Catalunya in 2015, the first pole of his Grand Prix career.
Over the last six Moto3™ races held in Catalunya, KTM has won only once, with Luis Salom back in 2013.