Chris Hollis and Daniel Milner gave CDR Yamaha Off Road the perfect start to the 2014 season claiming a 1-2 finish at the opening round of the Australian Enduro –X championships, held in Brisbane over the weekend.

Held in balmy conditions inside Archerfield Speedway and with a good crowd on hand to witness the season opener, Hollis not only made the perfect start to his season but also his debut race with the CDR Yamaha Off Road team.

Hollis qualified comfortably through to the three race final and was confident of a good showing in the all-important finals which were ran back to back with just a handful of minutes break between each race.

“It was a good way to start the year both for myself and the team,” Hollis said. “I was able to get good starts in all three races, not make too many major mistakes and race the conditions the best I could and fortunately that was good enough to win.

“This style of event can be hard as you have to be aggressive but also look after the bike as it is easy to wreck your race by charging too hard. The YZ250F was perfect all day and I don’t think it has a scratch on it which is a nice way to finish and also gives the guys back at the race shop a slightly easier week.

Hollis took second place in the opening two motos showing good speed and consistency. The final moto ended up being a shootout between the team mates with Hollis fighting his way past Milner and taking the race win and the combined 2-2-1 results gave him the overall round victory.

“It’s great to get the win and the CDR Yamaha team really put in the hard yards so it’s important to reward them with good results. Hopefully this is just the beginning,” he ends.

Daniel Milner made it a team 1-2 as he finished right in the shadow of Hollis after the points were added up. Milner launched his YZ250F into the lead in every race again proving just how good the new 2014 model machine is.

A fall in race one while leading cost him dearly as he could only managed a fourth place finish after his picked up his machine and charged to the finish. Race two saw him lead from wire to wire and rebound well for the race win, while race three saw Milner and Hollis battle it out with Hollis making the pass late in the race to claim the win.

Milner finished with 4-1-2 results and took a well-deserved second place for the round.

“Finishing on the podium is always the goal of any rider at the opening round of the season so it’s good to hit that mark and put myself in championship contention. It’s only a short championship held over three rounds so no rider can afford to make a mistake and have any hope of winning.

“It was good fun out there and I had some good battles with Chris. He got the win today and deserves his result but I look forward to racing with him again and next time going one better,” he laughs.

On hand to see his team kick off the year in fine style was owner, Craig Dack. Since taking the reins of the factory Yamaha Off Road team, Dack has scene enormous success and enjoyed his very first Enduro- X experience.

“Racing Enduro-X is not easy and at times it can be quite brutal out there with some daunting looking obstacles. Because I come from a motocross back ground, we really had to rely on the riders to tell us what they wanted from their bikes and to their credit they told us exactly what was required for them to get the job done.

“Both riders did an exceptional job and our off road technical knowledge is continually growing. The team is gelling well as both riders worked together today on lines and have forged a good relationship with the entire crew. The result today is a good jump start to the year.

“I look forward to the next round,” Dack ends.

Round two of the Australian Enduro-X championship moves to Parramatta Speedway on February 16.

KTM Enduro Racing Team riders Toby Price and Peter Boyle got their seasons off to positive starts as the opening round of the KTM Enduro-X series took place at Brisbane’s Archerfield Speedway, taking third and fourth overall behind race winner Chris Hollis and Daniel Milner.

In his first race on Australian soil since a serious spinal injury suffered in April 2013, Price looked dangerously close to his best, winning the fastest lap shootout on his KTM350EXC-F and tallying three, third place finishes for third on the day.

This came despite the Maitland ace being handicapped by three mid-pack starts on a track many found near impossible to pass on, and only competitive hunger and bullish intent on the first lap enabled him to progress far enough to feature on the day’s podium.

Team mate Peter Boyle showed his star quality in no uncertain terms with a cunning Race One win which saw him right there to capitalise on a fall from race leader Milner, then fend off a hard-charging Chris Hollis to secure the first race win of the series on his KTM250EXC-F.

Poor starts and falls meant the Gippsland ace could only post 1, 4, 7 results for fourth on the day.

KTM Enduro Racing Team Manager Brad Williscroft: “It’s good to get that first race of the year out of the way and see where we stand. There are a couple of things we’ll take away and work on for round two in Sydney, but starts today had a massive bearing on the race outcome as we saw today with Toby getting mid-pack starts every race and struggling to get through. Peter had that awesome first race, he got that great start behind Milner and he kept the pressure on him for three laps until Milner fell, then he hung on for the win.

Toby was pretty consistent, he had the pace but he couldn’t get to the front to battle with those guys. He’s disappointed with his result but he came away with no injuries and a little bit of work to do. Hopefully the track will suit us a bit more, be a bit more technical and with more passing opportunities.”

Toby Price: “That was a bit rough. I was feeling good all day and my lap times were good, I just came to the three heats and my starts really let me down. It’s a bit of a bummer, I’m a little bit disappointed but hey, it’s my first ride back. We’ll go home and get some starts dialled – we need to get a KTM up on the top of the podium. It’s not too far away – we’ll get it.

It’s great to be out there racing again. The KTM350EXC-F is awesome, it’s the best bike I’ve ridden for this enduro cross stuff, I’m really stoked with that. Now we’ve got the race jitters out the way we’ll be good to go for the next one.”

Peter Boyle: “It’s a hard one; I started off really well but didn’t finish off that flash. Still, I got to see where I’m at with those boys and I know I can do it now so that’s good.

In that first race I saw Daniel wasn’t as quick through the logs so I thought I would get onto him and try to put some pressure on and he crashed. I knew Chris was coming so I just tried to block the lines he could pass me on so I could get the win. In the second race I got caught up in the gate a bit then caught up in a few other little sections and had a spill trying to come back through. It’s frustrating, the 250 was brilliant through the corners and the log sections – I couldn’t ask for much more so I thank the KTM team for it.” 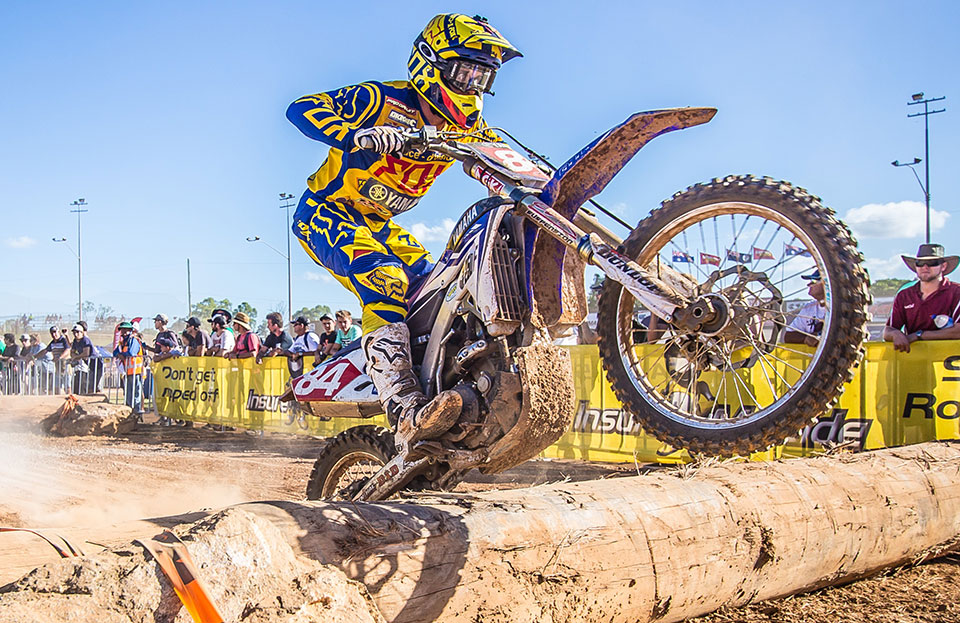 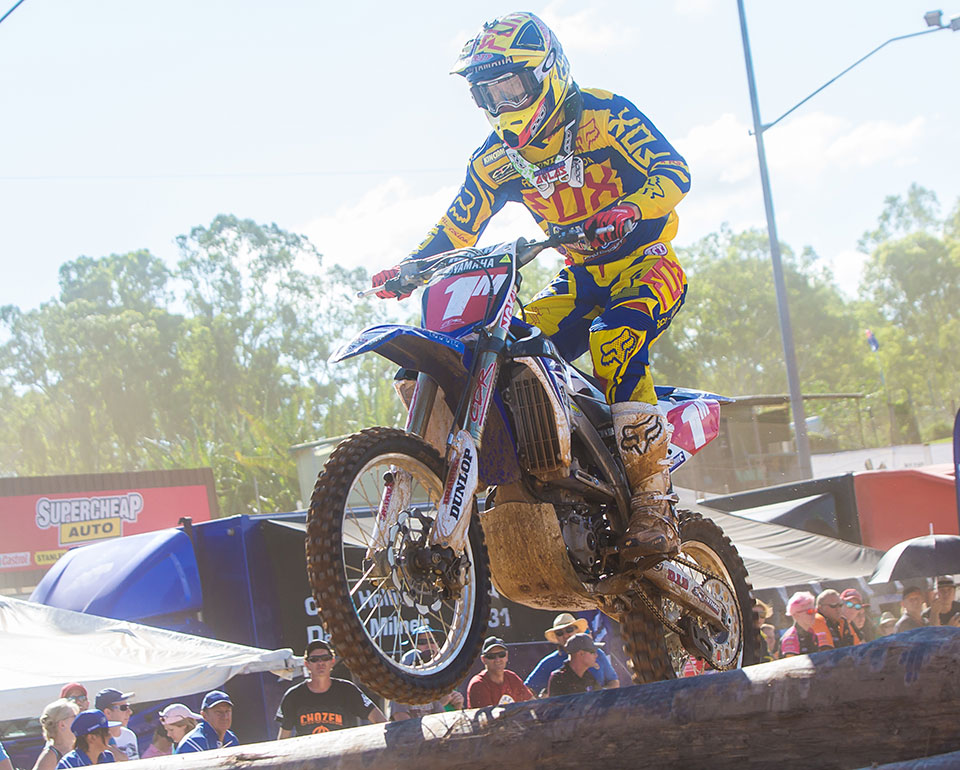 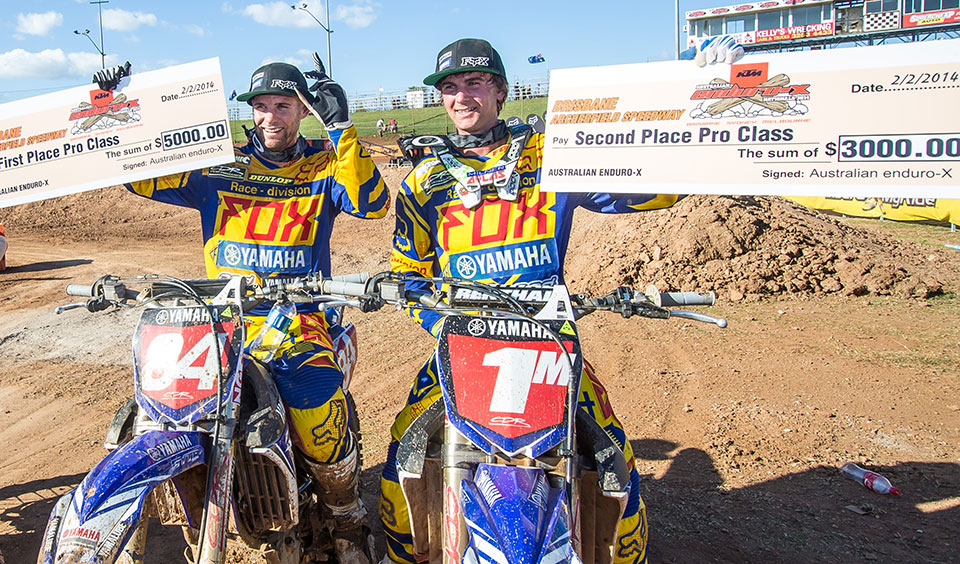