2018 Australian Supersport Champion Cru Halliday got off the line well but a four-wide bar banging fight took place as they streamed towards turn one and it nearly ended in disaster as Halliday was almost knocked clean off his machine. Both feet were dragging behind the bike and most of his body was also off the YZF-R6 for a period of time, heart in mouth stuff for onlookers, let alone Halliday. It was remarkable that nobody ended up in the kitty litter. That melee though left Halliday with plenty of work to do as he had been shuffled back to 13th place in the struggle to get back onboard his machine.

At the front it was Max Croker from Tom Toparis and Damon Rees. Toparis then went through to the lead at turn four on the second lap as Halliday moved up to ninth.

Turn four was also the point of the circuit of the next lead change as Max Croker got the better of Toparis. The two were then side-by-side heading to turn one on the next lap but Croker held his nerve to sweep across the front of the Kawasaki and maintain his lead. Croker backed the Suzuki GSX-R in deep at turn four to hold Toparis at bay again.

The battle continued again on the next lap as Croker and Toparis swapped positions at turn one, turn two and then again at turn three. Large black lines appearing out the back of the Cube Racing Kawasaki of Toparis but it was Croker that held sway around the back of the circuit.

Toparis took the lead again at half race distance just as the top five closed up markedly. Halliday had joined the party at the back of that top five which consisted of Toparis, Croker, Callum Spriggs and Damon Rees.

Halliday then picked off Damon Rees with ease before dispensing with Spriggs in similar fashion.

Things then got too heated up front! Croker getting untidy under brakes at turn four, trying to avoid Toparis but clipping the back of the Kawasaki, which shot the Goulburn youngster over the the highside as Croker went up the exit road.

With those two out of podium contention Halliday was left to his own devices up front. Despite some late determined efforts Callum Spriggs did not quite have the speed to run with Halliday but still banked a highly creditable second while Damon Rees rounded out the podium.

Cru Halliday survived a frightening turn one incident in the morning race before coming through the field from back in 11th to eventually take victory over Callum Spriggs and Damon Rees. The leading duo for much of the race though had been Tom Toparis and Max Croker, but a clash at turn four tipped Toparis out of the race while Croker was able to eventually regroup and salvage an eighth place finish. Croker was deemed at fault and thus was penalised a couple of grid positions for this second and final 10-lap Supersport battle of ASBK season 2018.

As Supersport competitors gridded up in readiness for a race start at 1345 Sunday afternoon the track temperature was registering 45-degrees, more than ten-degrees warmer than it was for the opening bout earlier in the day.

Being pushed back on the grid did not stop Max Croker leading the field through the opening turns when the race got underway as Tom Toparis and Cru Halliday gave chase. Toparis took the lead from Croker slipping underneath the Suzuki on the entry to Lukey Heights then Halliday pushed Croker back one further position at MG.  Halliday and Toparis were then side-by-side down the main straight and as they tipped into turn one it was Halliday holding sway.

Cru Halliday then went down on the exit of Siberia, the new champ losing the rear and crashing out of the lead with eight laps still remaining. Then there was two….  With Halliday out of the running it was a Toparis and Croker show up front, that duo with three-seconds on third placed Damon Rees.

There was a heady battle unfolding for fourth place though with the protagonists Nic Liminton, Callum Spriggs, Scott Nicholson and Jack Passfield all dusting each other up at almost every turn.

As the race progressed Toparis managed to break away from Croker and with four laps to go the Goulburn youngster had 1.7-seconds over the Suzuki.

Damon Rees made a determined effort over the final few laps to get on terms with Max Croker and made his move on the last lap. Rees made his first thrust at Hayshed, the Kiwi then sat on the tail of Croker at MG Hairpin but couldn’t quite get there on the run to the line and Croker managed to hang on to that second position.

Tom Toparis the clear winner by 3.7-seconds while Nic Liminton came out on top in that battle for fourth.

The round win though due to his pair of third places was New Zealand’s Damon Rees on the Carl Cox Motorsports backed Honda CBR600RR. 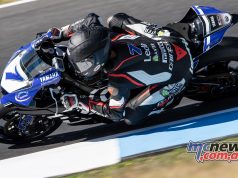 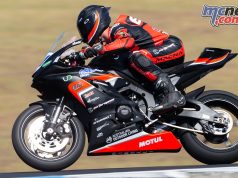 Oli Bayliss and the switch to Supersport 600 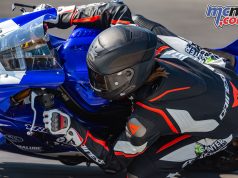