Trev heads south from Darwin before turning towards the east coast

Motorcycle Touring and Travel with the BMW K 1600 GT

I made a quick exit from Hidden Valley Raceway after an awesome weekend of racing at the 2.87km circuit situated just outside of Darwin. I was keen to get a few hundred kilometres under my belt to make a good head start on the almost 3000km trek across to Queensland’s Airlie Beach.

I figured getting 320km south to Katherine with only a little dusk/night running would make the remaining 2500km through to Airlie Beach a relatively easy two-day affair.

After a dip in the pool and reasonable nights sleep at lodgings on the outskirts of Katherine I was keen to put a good day in on the bike. The weather was good, wildlife not too bad, and caravan traffic reasonably light.

Continuing South on Stuart Highway, passing RAAF Tindal brought back a few memories as I’ve stayed at, and flown in and out of, the base a few times during my decade long career in the ADF.

650km South of Katherine I turned towards the east at Three-Ways roadhouse, a place I have stopped on a previous journey to overnight in simple donger-cabin style lodgings, but this time around I was keen to press on and made the turn eastwards on the Barkly Highway. The Barkly is Highway 66, thus our own Route 66, but in our instance it is a road much less travelled than the famous US version. Which I am happy to report I left my mark on with a huge burnout during a ride across America some years ago.

Crossing the border into Queensland near Camooweal, a further 450km on from Warumungu, I left behind the relative freedoms of the 130km/h speed limits of the Northern Territory. Now I was faced with the brain numbing trudgery of a mixture of 100 and 110km/h zones once in Queensland.

The road surfaces also went to shit with ridgelines in the road everywhere along with broken up surfaces, and a lack of verge clearing and maintenance in comparison to the NT, who funnily enough seem to realise that roadside obstacles/furniture and wildlife are the primary safety concerns for motorists on country roads. I mean, who would have thought…….? 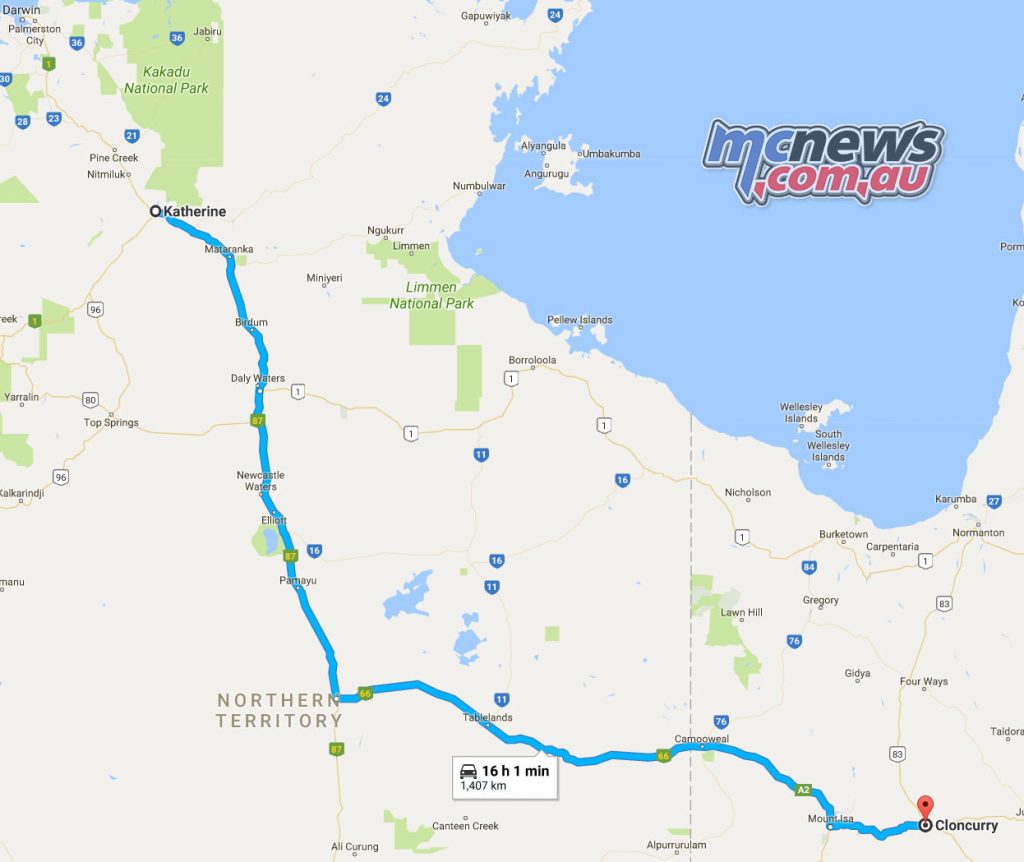 A further 200km saw me roll into the mining town of Mount Isa which in reality is more like a town inside a mine. I was keen to press on further through to Cloncurry for the night and pulled up stumps at the Wagon Wheel Motel after a 1450km day on the GT. This was a good choice with friendly helpful staff and a reasonable $105 tariff, accommodation costs can often get pretty silly around mine sites, so this was relatively decent value.

The ESA II suspension on the K 1600 GT was updated for 2017, not only taking in throttle and brake positioning as it responds to every surface irregularity, but also now lean angle. It has two primary modes, ‘Road’ and ‘Dynamic’, both switchable on the fly.

However, both modes are actually dynamic, constantly adjusting the damping in milliseconds. It would probably be more logical in this instance to call ‘Dynamic’ something like ‘Sport’. But, well, they are German. The Dynamic mode is truly quite sporting, the responses are really felt by the rider, in the way that quality conenvtional sports suspension also allows you to feel every irregularity in the road.

You really do feel the BMW responding to the road. I wouldn’t call it abrupt, but it is definitely a fair way towards the sporting end of the spectrum when it comes to suspension tune, particularly for a sports-touring machine like the GT Sport, which is, in itself, very much at the larger and more luxurious top end of that sports-touring segment.

In ‘Road’ mode the suspension responses are much more supple, and unless you are having a fang through the bends is by far the more amenable setting for the vast majority of riding. Due to the still dynamic nature of the response it still reacts to big hits, and once in Queensland some of the hits were big enough for the tyres to leave the road for a fraction of a second, activating the high-tech stability/traction control system and deactivating the cruise control. Yep, that big.

When not having to respond to big hits the GT Sport otherwise just rolls along beautifully with the damping subtle, gentle, but still well controlled enough to make it still feel like a proper motorcycle should feel. Especially one that costs north of 35 large, cruisers not withstanding of course…

No doubt BMW’s unique Duolever front suspension system is just brilliant on large motorcycles. The system is inherently resistant to any significant front end dive under brakes or hard corner entry, which allows the bike to retain its composure so well despite a hefty weight. Load the bike up with a pillion and luggage and the benefits become even greater again.

The rear Paralever which incorporates the shaft drive system and single sided swingarm in the one unit is also extremely well proven.

Of course this suspension wizardy and smart tuning also helps the rider to remain comfortable. And by god the K 1600 GT Sport is comfortable. This bike is not even the full luxury version, which is dubbed the GTL, The GT Sport has a slightly more sporting riding position and a little less cosseting all round, but after numerous thousand kilometre days on the GT Sport I have not once, seriously not once, had a sore arse. I struggle to believe it myself, but yet it is true.

Early on in the ride, some 5000km ago, I sometimes got a little sore in the elbows. I think from the relatively straight-arm position, but eventually my body just adapted. Normally on rides this long my neck might start to get a little sore, but I think the lightweight of the Shoei GT-Air, which is now considerably lighter than before due to Australia adopting overseas helmet standards, and the fairly expansive screen of the GT Sport, combined to help ensure that didn’t happen.

Apart from being a bit warm in the northern climes while in motorcycle gear, and perhaps a little eye-brain strain from the acute concentration required in order to not get splattered by wildlife or stock, I was pretty much fresh as a daisy at the end of each day. Probably didn’t smell quite that fresh though..

When I had arrived at Hidden Valley at the end of day four, where a lot of people in the race paddock had been following my journey, many looked upon with me pity and questioned how much my arse must hurt. But I was pretty much bouncing around with energy, and remarked that the riding bit was easy, it was the numerous hours after the ride each day on the computer that were the tough bits…

We will expand further on the K 1600 GT as we detail our final leg of the journey that saw a quick-fire 1000km run from Cloncurry through to Airlie Beach, where we conclude our 7000km sojourn aboard BMW’s sport-touring flagship.

BMW detail line-up changes for MY21