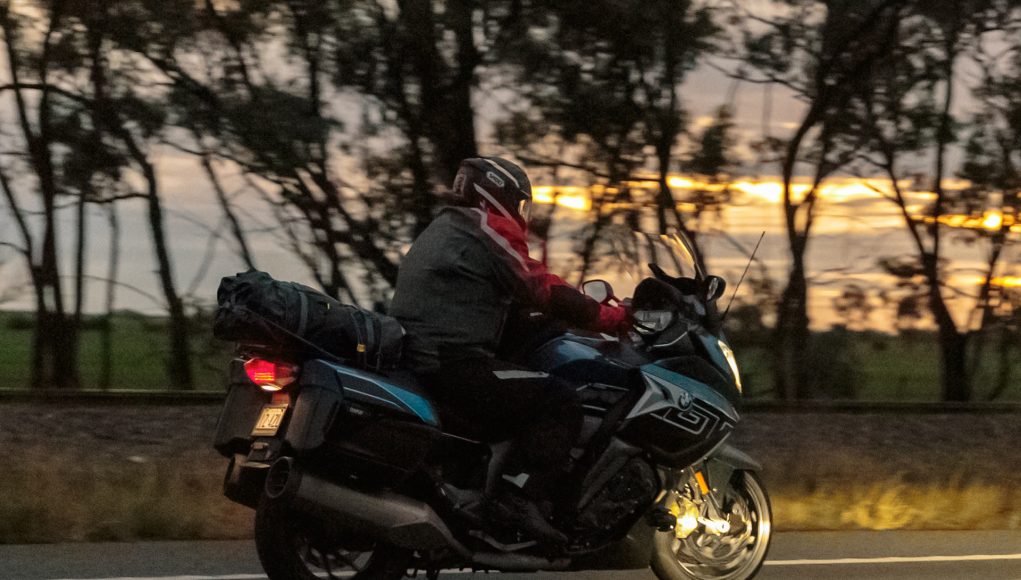 A busy morning loading all the race news on MCNews.com.au saw me certainly behind the eight-ball in my quest to venture north for the ASBK round at Darwin’s Hidden Valley this coming weekend.

I finally broke away from the computer about 1400 to hit the road and ride in to diabolical weather conditions. Rain was sheeting at times, which had me sheeting myself along some of the slippery sections of running water between Yea and Seymour. Perfect weather to test out the new BMW Street Guard suit!

Conditions were bloody horrendous at times and no liner is needed for the Street Guard in order for it to be waterproof, thus I managed to stay dry throughout.

There is one removeable thermal liner in both the pants and jacket, it was single digits on the temp’ gauge for the most part, and I had no thermals on, only the skin of my legs, and the sturdy new Oxford’s new Kevlar lined Kickback shirt (Link) beneath the jacket.

The shirt is a smart looking flanno that is built sturdy to give you some protection in a slide down the road, if you were only wearing the shirt. And I was 99% of the time warm enough with just the shirt and the BMW Street Guard jacket.

Lack of luggage space kept me from taking thermals etc. as I am heading towards warmer climes and can just suck it up for the first day or so. I suspected the tiniest bit of damp might have got in my now few year old Alpinestars SMX 5 boots around the toes.

They are far from new and have a few scuffs, but when I took my boots off tonight my socks and feet felt dry so maybe nothing at all got in. Dririder’s new Fluid winter gloves (Link), did their job and kept my digits dry and warm enough, for under $100 they are excellent value.

For this trip I am wearing a Tom Luthi replica edition Shoei GT-Air, complete with UClear Amp Pro Bluetooth system. Tiny microphones are mounted inside the top brow of the Shoei and all calls I’ve taken people can’t believe I’m riding a motorcycle.

When organising a meet up with photographer Kendall Jennings we had a chat while I was riding, listen to the audio here.  I might need to reposition the microphones a little, they are tiny and tucked up above the eyebrow line inside the helmet lining, so completely hidden. Amazing really as you don’t even know they are there.

The K 1600 GT is, as you would expect, comfortable fast and sure footed. I really do love these things, they handle so much better than you would imagine, and go like hell when up them for the rent too. Yet have nice factory luggage, heated seats, heated grips, electric screen, stereo system, and latest technology traction control and ABS systems.

The 1649cc in-line six is just beautiful. A straight-six engine configuration offers almost perfect primary/secondary balance without the need for any balance shafts, and BMW are renowned for making some of the world’s best engines in this configuration across the car side of their business.

Smooth grunt everywhere, with gobs of torque, from a relatively simple singe throttle body layout that boasts 175Nm of torque at 5250rpm from its six 72mm pistons.

It loves a rev too, however, a 67.5mm stroke sees the peak 160hp arrive at 7750rpm and the big six will happily keep reving beyond that number, and kin ell it sounds damn good while doing it. If allowed a bit more bark it would be truly glorious.

Up/Down quickshifter makes the smooth, particularly for such a big engine, gearbox child’s play to operate. In the image below you can also see how the reverse gear operates off the starter motor.

The only bugbears I have discovered during my time on this latest generation K 1600 GT is that the fly by wire throttle gives me a little more rpm than I would like when taking off, giving a slightly unnatural feel when launching.

I feel this has been mapped in as somewhat of a fail-safe against riders stalling at low speed, as this would be a big motorcycle to stall in a tight turn. This is where reverse gear also can come in very handy, adding another level of amenity when in precarious parking positions.

The other small gripe is that the buttons, of which there are many, on the switchblocks are not illuminated at night.

This is the ‘Sport’ version of the K 1600 GT, there is a more luxurious touring version also on offer, while this Sport version pictured give the rider a sportier riding position and makes for a more natural feel when having fun in the twisties.

Make no mistake, these things are no slouch when things turn sporting, a well ridden one is much more of a weapon than any of the uninitiated would ever expect.

Oh, I forgot to mention it also has electronic suspension and the headlight points around the corners as you tip in….

I eventually pulled into the Ouyen Pub for the night, just south of Mildura. The last couple of hours were dark as I hadn’t got away until mid afternoon. So only a very wet and treacherous 500km arvo/evening to kick things off.

Old style country pubs in small rural towns are generally a hit and miss affair, the Victoria Hotel Ouyen was a hit. For sure, this beautiful old building is a little run down and needs some love, but it is clean, hygienic and bloody cheap!

$45 for a relatively spacious single bed room, shared bathroom down the hall, and to top it off a serve yourself basic continental breakfast in the morning!

Got in to the pub about 2015, food was still on, ordered the salmon/chips/salad for $20, it came out quickly and was really bloody nice = winning. #Nofoodpicsherethough.

A couple of takeaway beers, then it was up in to the room to start work, reflecting on how glad I was to have spent the day ensconced in the new BMW Street Guard suit, through the cold/wet and downright bloody horrible riding conditions.

The plan for tomorrow… I have no plan, other than to head towards Darwin. That will entail crossing in to South Australia over to Port Augusta and then start the northward run up the middle towards Coober Pedy. Hoping to get away before 9am after an early store working on the site.

We aim to update you every day or so throughout the journey, so come along for the ride to Darwin with me!