Ducati, now over 90-years-old, is more widely known for producing cutting edge sportsbikes, rather than fat-tyred, low-slung cruisers, but the Diavel, first introduced in 2011, changed all that.

The latest iteration of the Diavel is the new XDiavel. This is the first time Ducati has gone the whole hog, so to speak, and fitted a belt final drive to one of their motorcycles.

Tipping the scales at 220kg, (70kg lighter than a V-Rod), Ducati’s XDiavel boasts a massive 156hp, backed up by an impressive 129Nm of torque.

Those numbers are a couple of ponies down on the regular Diavel, as for the XDiavel, Ducati has  concentrated on delivering more bottom end pull than outright numbers. XDiavel does, however, boast a larger capacity than the Diavel, the regular 1198cc Diavel donk stretched out to 1262cc via a longer stroke.

The v-twin engine shares its base DNA with Ducati’s Superbike machines. The hottest road-going version of which is the carbon-fibre framed Superleggera. That $109,990 machine produces 215hp while tipping the scales at a svelte 156kg.

The vee angle of the Ducati twins lays the cylinders 90-degree opposite each other, lending to the layout being often described as an L-Twin, the forward cylinder tilted almost parallel to the ground. 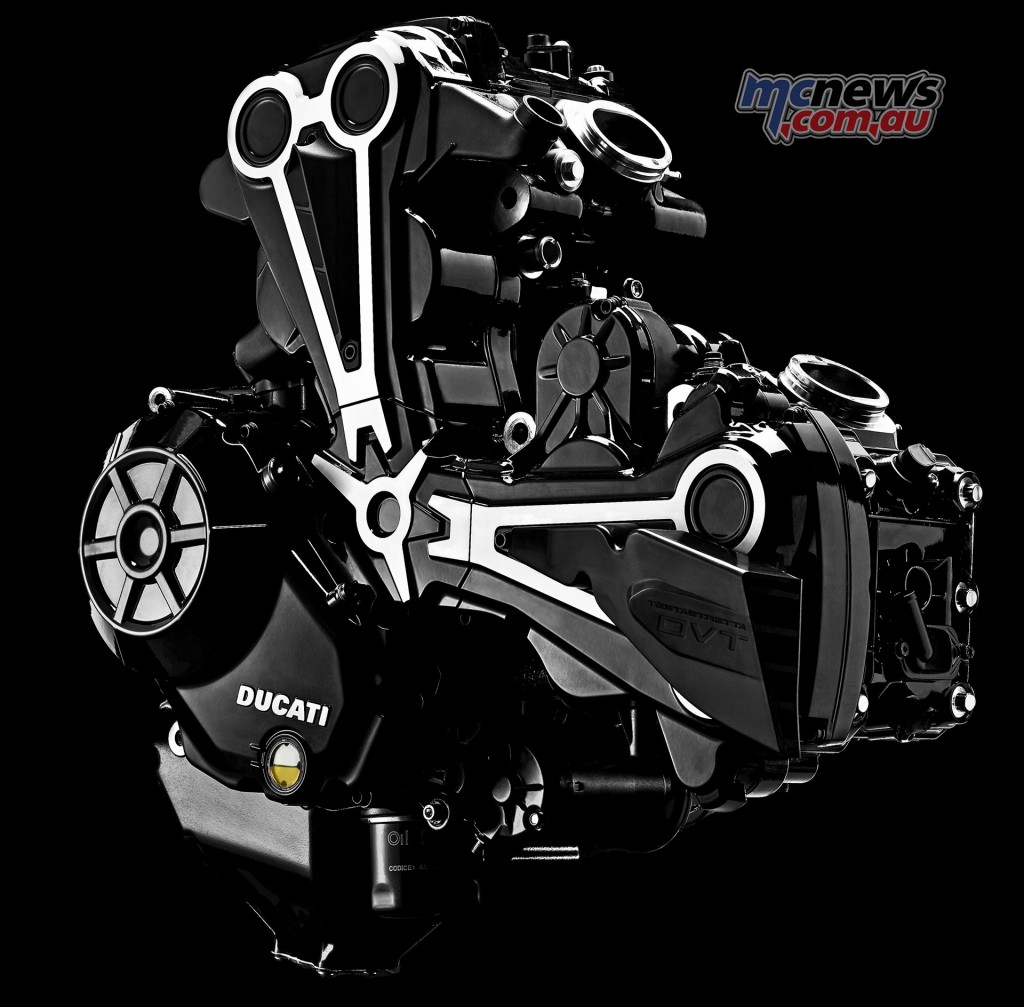 This wider angle between the cylinders allows Ducati to employ much straighter intake tracts than achievable in more tightly packed vee angles, such as Harley’s 45-degree layout.

The latest advances in cylinder head design and engine management systems have allowed Ducati to tame what was once a rambunctiously rude engine in traffic, into an entirely civil urban beast. Albeit one with a pretty massive sting in its tail when that pair of gargantuan 56mm oval throttle bodies twist wide open at the command of the XDiavel’s smooth ride-by-wire throttle.

It is quite an achievement to combine such huge throttle bodies, and fat 106 mm pistons banging their way into a heady 13.0:1 compression ratio, yet remain so tractable down low.

To ensure that grunt arrives early, and delivered in the most linear fashion possible, Ducati have also added variable valve timing to their trademark Desmodromic valve-train.

It was a good move too, the larger engined XDiavel needs 3000 rpm less to reach that 128.9 Nm maximum torque figure than the regular Diavel. Twist peaks at 5000 rpm, but 80 per cent of that figure is pumping by 2000 rpm.

That power is transferred to a 240 mm rear Pirelli via a six-speed gearbox and wet slipper clutch. 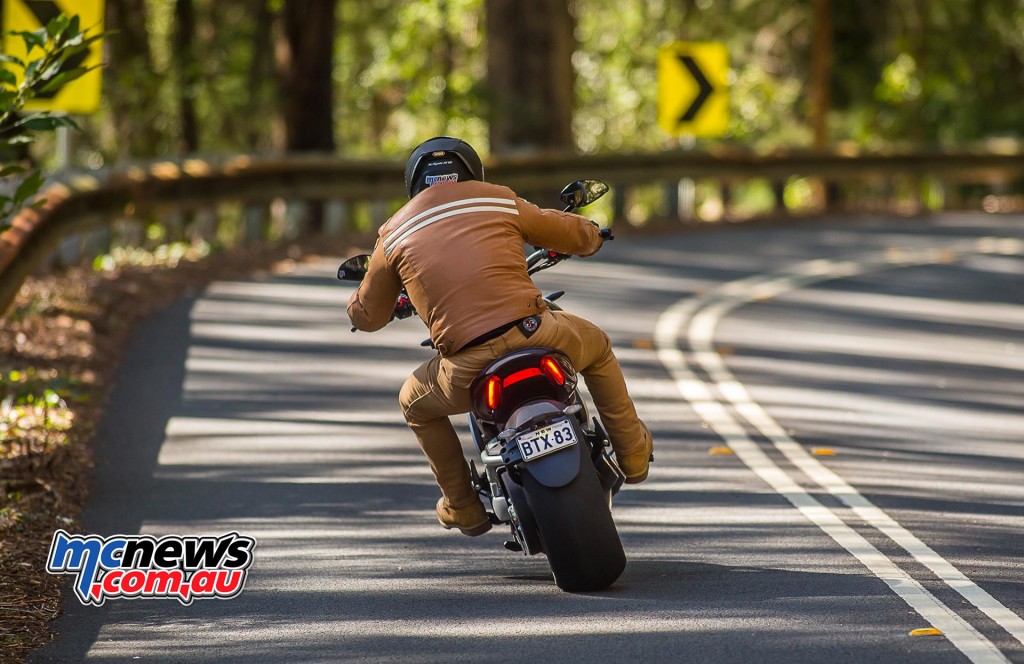 A decade ago, with the release of the 1098 R, (a machine I was lucky enough to ride back in the day at Phillip Island), Ducati were the first manufacturer to feature a proper multi-stage traction control system that was more than just a gimmick.

Ducati have pioneered many improvements in electronic safety systems since then, and the suite employed on the Diavel takes further steps forward in these areas, including a lean-angle sensitive ABS system.

For those of you that have only experienced earlier lower-tech systems, that take away from the riding experience, let me assure you that when you are aboard a modern Ducati, that is not the case. This is next level stuff, largely imperceptive from the tiller.

Helping anyone to get out-of-the-hole smartly is Ducati’s ‘Power Launch System’. Launch control is activated by pressing a dedicated button on the right switchblock, then it is clutch in, first gear selected, throttle twisted wide open. Release the clutch a little more aggressively than you normally would to get off the line, but don’t just dump it. To help protect the clutch, the system also limits how many consecutive full-throttle launches it allows before normal riding must be resumed. The system then resets and allows you to play drag racer once again.

With a fat 240/45 ZR17 Pirelli Rossi on the back, even with 156 horsepower at your disposal plenty of traction is always there to be had in dry conditions, although, on sketchy surfaces, it is nice to have the knowledge that the electronics are there in the background to be your last line of defence from terra firma, if your ambition outweighed your talent…

Up front a 120/70 ZR17 hoop does the business with its more sporting profile helping the XDiavel to turn particularly well in comparison to most cruiser based brethren.

Ducati have recognised that cruiser buyers want their v-twins to not only go good, but look damn good while doing it. Thus Ducati have given this latest Testastretta engine a chiselled profile thanks to exquisitely machined billet timing belt covers on the upper range XDiavel S, adding more bespoke touches to what already gives the appearance of something that could be a hand-made special.

The S variant of the machine also scores higher-spec Brembo brake calipers, along with some very trick 12-spoke machine finished rims, and a special diamond-like coating on the sturdy 50 mm Marzocchi forks. It is this upper level XDiavel S that MCNews.com.au spent time with.

It should be noted that the standard XDiavel also scores excellent Brembo braking hardware and quality suspension, with a fully-adjustable Sachs monoshock suspending the sculpted rear end of both machines.

XDiavel certainly shades any traditional cruiser based machine when the blacktop starts snaking. As you would expect, it’s a Ducati!  With 40-degrees of available ground clearance, embarrassing poorly ridden sportsbikes on a cruiser has never come easier.

The Italian brand once had a name synonymous with high servicing costs, but in recent years Ducati have made great strides in reducing those charges. Scheduled services are now at 15,000 km intervals, with valve adjustments, a process generally more expensive than most, due to Ducati’s trademark Desmodromic valve actuation system, now only required every 30,000 km.

Ergonomically, the XDiavel is a strict departure from the Ducati’s sportsbike roots. With up to 60 variations available to put the rider in their most preferred position. Cruise control also helps preserve the licence when highway hauling.

Adjustable footpeg placements and three different handlebar positions all add to the individualisation possibilities of the machine. And that’s before you get started on an original accessories catalogue that almost manages to put Screamin’ Eagle to shame!

Pillions can also be catered for with an optional backrest and more comfortable seat options. Three tailored extras packages include a Sport Pack, Touring Pack or Urban Pack.

A colour TFT dash layout adds another very modern touch to what is, in every sense, a very modern take on traditional cruisers.

A Bluetooth module on the S model also displays incoming text messages on the screen and displays the music currently being listened to if the rider has their own phone-to-helmet earbud systems in place. A proximity ignition key means that your keys can stay in your pocket.

The XDiavel will set you back $27,490 (plus on road costs), while the upper spec’ S variant commands a $5000 premium over the base model.

With the XDiavel Ducati have got really serious about bringing a traditional feet-forward cruiser to market, while delivering a level of v-twin performance that only Ducati can bring to market.

What will the Italians might bring to the table next in this space….? Will it be more gentleman? Or more bastard….?