Denver was the 15th straight weekend of the AMA Supercross Championship and it was Eli Tomac who kept his slim 450SX championship hopes alive with a win over Cooper Webb.

Adam Cianciarulo meanwhile extended his narrow championship lead in the penultimate 250 West Coast main with a win over his closest rival Dylan Ferrandis.

There were several extra challenges for the riders at Denver, the first being the freezing cold, in fact, the first practice session was cancelled because of the snow all over the circuit.

Horse-power sucking altitude also caused issues as the riders stretched their way over some of the trickier jump combinations and finally the cold soil became hard and slippery leaving the riders fighting for traction on what ended up being a relatively one-line layout.

Marvin Musquin grabbed the holeshot over Joey Savatgy, Ryan Breece, Justin Bogle, Webb, Tomac and Zach Osborne and as Breece dropped outside the top ten, Tomac was storming forward to pass Webb, Bogle, Savatgy and finally Musquin to take the lead by the end of lap four.

All eyes were on Webb who looked patient in fifth but steadily, and I mean steadily, the championship leader moved by Bogle and Savatgy to take the final podium position.

Cooper was not done and methodically closed in to pass teammate Musquin for second and that is where they all stayed to the line with Tomac taking the win from Webb, Musquin, Bogle and Savatgy.

Behind the front runners we saw Blake Baggett, Ken Roczen, Osborne, Josh Grant and Justin Hill rounding out the top ten. Cole Seely and Dean Wilson were both involved in separate crashes that ended with neither rider crossing the finish line.

With just the East Rutherford and Las Vegas rounds remaining, Webb holds an 18-point lead over Tomac while Musquin sits a further five points back.

“That was the loudest race I have ever been in with the crowd noise, it was so much fun, gosh, it wouldn’t be Denver without some snow, we even rode in hail on Wednesday, but what a cool day for us, luckily the track stayed good so overall a pretty good weekend.”

“I rode really well once I got around Joey [Savatgy], I was really good in the whoops, good on the whole track and I was able to catch Marvin and actually pass him put a little gap. I felt like I caught Eli a little bit but he was kind of riding his own race. Overall, it was a good weekend. Obviously, I want to win but it’s still good points and we’ll enjoy this off-weekend.”

“I was not very confident going into the Main after a difficult heat race but good thing we made some changes and they helped me pull off a good start – that was the key to getting on the podium tonight. The track was very difficult with the hard surface and ground but no excuses I gave my best.”

Rookie Michael Mosiman earned the holeshot from Cianciarulo, Gareth Marchbanks, Jimmy Decotis, RJ Hampshire and Dylan Ferrandis so the expectation was that Cianciarulo would move to the lead and check out.  But Mosiman was enjoying his time at the front to keep the championship leader at bay for a full six laps.

Just as Cianciarulo moved into the lead, Ferrandis slotted into third with a move on Decotis and it wasn’t long before both Ferrandis and is teammate Colt Nichols sliced by Mosiman for second and third.

That was where the main players remained to the flag with Cianciarulo taking maximum points over Ferrandis, Nichols, Hampshire, Mosiman and Cameron McAdoo.

Cianciarulo takes an eight-point lead over Ferrandis as they head to Vegas for the East/West Shootout in two-weeks’ time so nothing is in stone as far as this championship goes.

“I, like most was struggling with the lack of horsepower and the dirt got really hard and slick but luckily I had a good night, I felt pretty good in those conditions, I can’t say enough about the crowd, they were unreal so a shout out to those guys.”

“It wasn’t a great weekend, the temperature made it not so much fun to ride for me in particular, I struggled to get warm, I know it is the same for everyone but for me it was difficult so to be second is good.”

“It was definitely different with the snow during practice but the track was pretty simple but became technical with the way the soil was so you had to be on your toes, overall we are happy, third is good, we needed to start a little better but all good.” 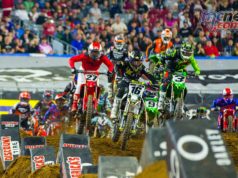 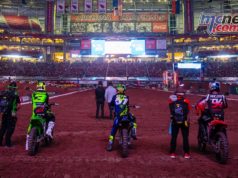 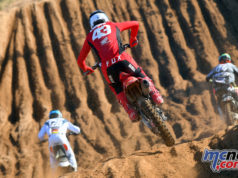