MCNews catches up with Jayden Rykers

After setting the motocross scene alight over the past few years, Raceline Pirelli KTM’s Jayden Ryker recently started his first full season in the Australia Supercross Series. Hailing from Western Australia, he’s travelled the country looking for new ways to turn his passion into a job.

A successful start to his motocross career saw him finish runner-up in the Under 19’s class of the Australian Motocross Championship, and fourth last year in the MX2 senior class. Rykers is ready to take that step to the next level and be a championship contender.

MCNews: How did your motocross season go this year aboard the new team?

JR: “The year started out quite good, I made the transition from the two-stroke to the four-stroke. I returned from a shoulder surgery in the off-season and moved up to Sydney to start the year off with the Raceline Pirelli KTM team. It allowed us to work a lot more closely together and do more testing which was beneficial in the early stages. The year started off strongly with a 3-6 result at Wonthaggi, but from there my starts let me down, and I couldn’t achieve the results I knew I was capable of.

“It didn’t really change until the mid-point of the season when I relocated to Melbourne and hooked up with Ross Beaton to start on his program. I also travelled home to Perth to compete in the state titles there where I picked up some good starts and race wins, and just regained confidence within myself.

“At Nowra, I got the holeshot and raced out front and then came from last in the next moto back to sixth for a 2-6 result, which put me up on the podium for the first time this year. But from there the starts again let me down and then contracting a virus before the final two rounds didn’t help. I finished the series seventh overall but I know I should be at the pointy end competing for the title.”

MCNews: Have you had much Supercross experience in the past?

JR: “Last year was my first year in the series, but with such a small time frame to make the transition to Supercross I didn’t get the preparation I really needed, which showed in the first round when I went down hard. I decided at that point I needed to step back and get my body right, and with a great team backing me, I didn’t want to go out and not get the results I was after, so I called it a year earlier than I’d wanted to.”

MCNews: Do you feel prepared for this year’s supercross series?

JR: “Well essentially this is my first year of racing a full series. I feel whenever someone asks if you’re prepared you always look back and think, ‘I could’ve done more and things could’ve been different’. With the way the pre-season unfolded, it was a matter of doing the best I could with what I had. The Melbourne weather played its part with a lot of rain hindering ride time as tracks were either underwater or just un-rideable. I still went to Newcastle to test with the team a couple of times but I still only managed to put 10 hours on the bike which isn’t a great deal, but the transition was a lot easier than last year. The team has been behind me 100 per cent, and it helped with my confidence, and I think it shows on the track. I managed to qualify well and finish fourth in my heat which was where I wanted to be but unfortunately had an issue in the main event.”

MCNews: You had a big crash in the main event at Jimboomba, what happened and did you hurt yourself in the incident?

JR: “I had a decent gate pick on the inside, but with the day being hot the gates were slick and I misjudged the start and went around the first corner near last. I started to move through the pack and got into 10th behind Taylor Potter, and the track was just greasy. Through a rhythm section I lost traction on the up ramp of a small double, and it was enough for the front to dip and it put me over the bars. Lucky I was wearing pretty beefy body armor, so I got away from the crash unscathed and not hurt which was pretty lucky, and I even managed to finish the main event and salvage a few points as well.”

MCNews: Where do you think you fit within the field of riders?

JR: “With the preparation that I had before Round 1 I put myself around sixth to eighth, but not really any further up the field. But it’s hard to say, not pushing through the main event after my crash; I come on strong near the final stages of races. When other riders are getting tired and making mistakes, I capitalise on that moment and try and pick up a few positions late. I’d obviously love to be on the podium, and I can see myself there in the future, but you need to be realistic when setting goals.”

MCNews: What’s it going to take to get on the podium?

JR: “Starts! A lot of the tracks provide rhythms where no rider gains too much time by doing anything huge. So perfect starts and clean laps are what it’s going to take to get on the box. Escaping that bottleneck of riders in the opening helps create space between you and the field as well. You saw Jackson Richardson at Jimboomba get a good start and jumped every rhythm fine in the opening lap of the main event, and just in doing that can separate himself from the field and gain some breathing space on other competitors. It’s also about being smart, I didn’t take any risks on the night but rode the clever lines and rhythms every lap, whereas other riders took those risks and may have made up a second one lap only to lose two the next.”

MCNews: Are there aspirations of racing on the international stage?

JR: “Absolutely! I’ve always looked overseas to go and ride, but I think there’s always riders that will jump the gun and spend a year or two over there really unprepared for what’s ahead of them. I could’ve been in Europe and raced this year. I had a deal lined up, but it’s one of those things, if you’re not ready and don’t have the right people around you with a stable structure, it can be degrading for a rider and their confidence. You still may learn something from your time there, but Australia is home. You know everything here, everyone speaks the same language, you know the tracks and people in the industry which makes it a lot easier to progress. There’s a move on the cards in the future, but there’s a job to be done in Australia before you proceed and make that move on to the international stage.”

MCNews: Do you have anything lined up for next year yet?

JR: “Obviously I’ve been talking to people, everything is in motion, it’s just a matter of sorting out the fine details and putting pen to paper. Nothing confirmed as yet, but everything is on track to compete next year here again in Australia.”

The 2017 Australian Supercross Championships next heads to Victoria when the second round of the prestigious international event is contested at the Bacchus Marsh Motocross Club, Saturday October 14th. 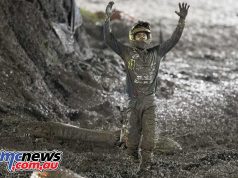 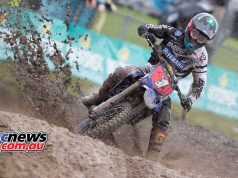