After a long summer break the Asia Talent Cup returned in Buriram, Thailand for Round 4 of the championship, with two races held over the weekend, marking the beginning of the second-half of the season. Engines fired up for the first time since July at the Thai venue before the Cup heads to Motegi on the way to the season finale at Sepang… with everything to race for!

Sho Nishimura arrived as the man in charge in the standings, with the Japanese youngster on 115-points at the top – 18 clear of his nearest challenger, Indonesian Afridza Munandar. Then there was another gap of 14 points back to Adenanta Putra and Takuma Matsuyama.

A crash in Race 1 for Nishimura ensured that lead was immediately under threat, with Putra receiving a ride-through penalty, allowing Matsuyama to take a clear Race 1 win, with drama ending the podium charge of three riders in the final corner.

Matsuyama went on repeat his performance in Race 2, this time under pressure from Syarifuddin Azman and Afridza Munandar, who would complete the podium and it all coming down to the last corner. The result leaves Takuma Matsuyama with a four-point lead over Sho Nishimura, with Munandar a further 16-points in arears.

Aussie Jacob Roulstone put in a strong effort to claim 6-5 results, while Harrison Voight was a DNF in Race 1 and penalised for Race 2 having to start from pitlane, but still ending the race in the points, in 15th.

Takuma Matsuyama took a commanding win in Race 1 of the Idemitsu Asia Talent Cup at Buriram, pulling clear of the chasing pack – and the drama – to cross the line over three seconds clear for his first win of the season. Herjun Firdaus and Syarifuddin Azman completed the rostrum for their first podiums too, with final corner drama taking three riders out the podium fight…

The front row got fairly equal starts to blast down to Turn 1 in unison, but drama just off the front grabbed everyone’s attention as points leader Sho Nishimura lost it and skittled out, taking a couple of riders with him. And there would be plenty more drama later, but Matsuyama was already far clear of it and from there on out, the Japanese rider only stretched his advantage.

The fight for second raged throughout the race, however. Firdaus, Azman, Tatchakorn Buasri, polesitter Afridza Munandar, Shoki Igarashi, Adenanta Putra and Idil Bin Mahadi all battled it out, with the first to drop from the group proving Putra as he was given a ride through for a jump start. And then there were six…

As the laps ticked down, it seemed Buasri and Munandar had the form but it wasn’t to be. As Matsuyama crossed the line in the clear, the fight for second approached the final corner and Igarashi then tried to force his way through – and lost the front, taking several riders with him. That left Firdaus and Azman coming through to complete the podium. Igarashi was given a back of the grid start for Race 2 as a result.

The man who crossed the line fourth, Bin Mahadi, also received a penalty – a time penalty the equivalent to a ride through – and is classified eighth, bumping home hero Piyawat Patoomyos up to P4, just ahead of compatriot wildcard Buapa Thurakij. Jacob Roulstone and Ryosuke Bando were next up ahead of Bin Mahadi, with Putra fighting back to ninth and Warit Thongnoppakun to tenth after he suffered contact. 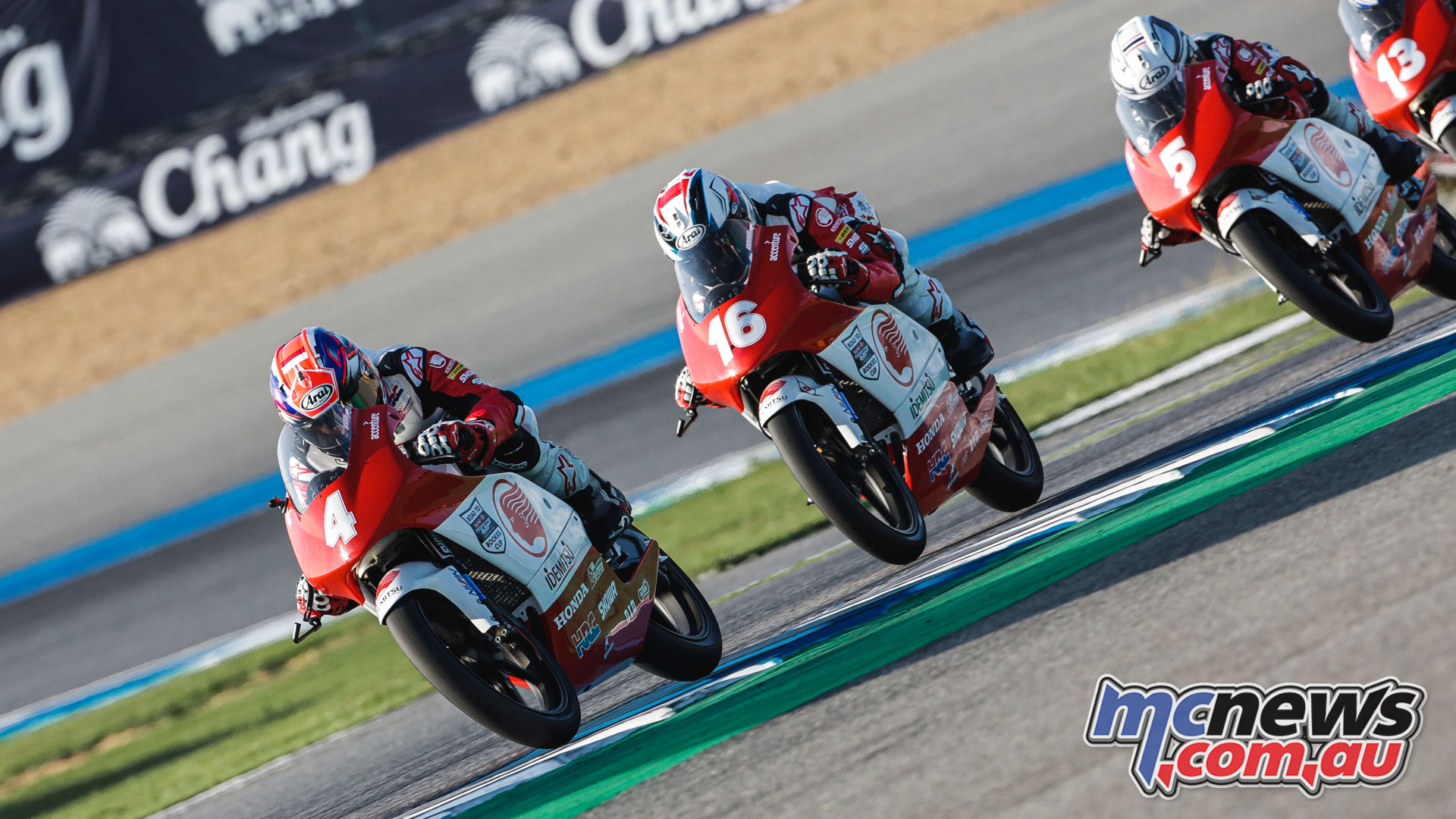 Kadir Erbay took 11th ahead of Nishimura, with Rei Wakamatsu having fought back to ahead of the points leader but then demoted a place for overtaking under yellows at the final corner. A penalty from Race 1 also saw Harrison Voight start from pitlane for causing a collision with Thongnoppakun.

It was home hero Tatchakorn Buasri who stormed to the holeshot off the front row in Race 2, the Thai rider taking over as he did in Race 1 and Munandar, especially, one to lose out. Matusyama slotted into second and flashbacks from Saturday must have immediately started for many on the grid, but number 11 wasn’t bolting off on Sunday.

Instead, the race was a classic freight train with the lead swapping and changing, and a lot less drama than the attrition of Race 1. Matsuyama spent plenty time at the head of the race, but the Japanese rider just didn’t seem quite able to pull the pin – although his key rival, Sho Nishimura wasn’t having the easiest race of it as he got beaten up in the group, pushed down outside the top five.

Eventually, however, Matsuyama got his chance as the squabble for second allowed him to make a break for it with eight laps to go. Was this it? The gap went up to over half a second and kept on climbing…

With four laps to go though, Azman was on a charge. Breaking free from the group battle, he was able to close the leader down – and brought some company. It was therefore a quartet heading over the line for the final lap, with Matsuyama facing Azman, Buasri and Munandar down for the win and of course, it went down to the final corner.

Buasri was a little too far back but both Azman and Munandar attacked Matsuyama, one either side, but the Japanese rider held firm and kept the perfect line around the corner, exiting ahead and slicing away and over the line to do the double. Azman took second and Munandar third, with Buasri heading wide as he also tried to get involved. The home hero was forced to settle for fourth.

Aussie Jacob Roulstone got the better of former leader Nishimura in the end, the Australian putting in another stellar performance on Saturday to complete the top five, as behind Nishimura, but by just a tenth, came Adenanta Putra.

“Really proud of myself this weekend at round 4 of Asia Talent Cup. It’s been tough to get to this point but today it feels great. Free practices went well with both sessions at 10th and qualifying a bit disappointing at 15th. Race 1 was full of drama but I was holding 10th place when 3 went down at the front on the last corner allowing me to claim 7th. A further rider was penalized so I managed 6th! But race 2 I worked hard for it and battled up the front right to the end and grabbed 5th place. My best ride and result all season. Thank you Mum for being here, Steve Nagle for all his help, Colin Stoner for his support, dad and Ashley back home and all the people who have supported me and said hi over the weekend. Also Thank you to Joan my mechanic and all the Asia Talent Cup team.”

Thai riders Warit Thongnoppakun and Piyawat Patoomyos took P8 and P9 on home soil on Sunday, with Shoki Igarashi completing the top ten to bounce back from his back of the grid penalty. Herjun Firdaus couldn’t repeat his Race 1 form, taking P11 ahead of Idil Bin Mahadi, Ryosuke Bando, Rei Wakamatsu and Australian Harrison Voight, who took the final point despite his penalty of starting from pitlane.

That’s it from Buriram, and now it’s next stop Motegi…home turf for a good portion of the grid, and the two men at the top of the standings. Last year it was all about Matsuyama, can Nishimura flip the form book in 2019? Find out in two weeks.