There have been four different winners in the opening nine MotoGP races of the year and ten different riders have finished on the podium – the same as in 2017 – representing four different nations.

Nine different riders have led at least one lap across the line since the opening MotoGP race in Qatar. Marc Márquez leads the way with 89 laps followed by Jorge Lorenzo (87) and Johann Zarco (19).

Only two of the 24 riders competing full-time in MotoGP have not scored any points since the opening race in Qatar: Xavier Siméon and Tom Lüthi.

Valentino Rossi crossed the line in second place at the German GP, which is his best result since he was also second in Australia last year. With this second place, Rossi equaled the best result of Yamaha in 2018 taken by Johann Zarco and Maverick Viñales.

At the Czech GP, Valentino Rossi will be aiming to become the first rider in the history to reach the milestone of 6000 points scored in Grand Prix racing. With his second-place finish at the Sachsenring circuit, he scored his 5994th point since the beginning of his career. His closest rivals are Dani Pedrosa with 4094 points and Jorge Lorenzo with 3869.

At the Czech GP, it will be the 23rd successive year that Valentino Rossi will have started in a Grand Prix race at Brno. It will be just the second circuit, along with Jerez, he will have raced in every year of his Grand Prix career. The other three circuits that have appeared on the Grand Prix schedule every year whilst Rossi has been racing (Mugello, Catalunya and Assen) were all circuits he did not start following his injury sustained in practice at the Italian GP back in 2010.

Maverick Viñales is the only rider to have scored points in all nine of the MotoGP races in 2018. He has scored points at the last 19 successive races. The last time he failed to score any points was in Assen last year when he crashed out on the twelfth lap of the race at the last chicane.

In addition, Yamaha has stood on the podium for the last 12 races, which is their longest podium sequence without a win in the MotoGP era since 2002.

Álvaro Bautista, who became the 15th rider to reach the milestone of 2000 points scored in Grand Prix racing at the Sachsenring, crossed the line in fifth place, which is his best result across the line since he was also fifth at the Italian GP last year.

At the German GP, Álvaro Bautista equalled Ángel Nieto and Alex De Angelis with 265 Grand Prix starts. In Brno, he is scheduled to make his 150th start in the premier class.

At the Czech GP, Andrea Dovizioso will be aiming to become the sixth rider in the history of Grand Prix racing to reach the milestone of 2000 points scored in the premier class. Following the German GP, he has scored 1995 points in the class.

Dovizioso will also be making his 100th start for Borgo Panigale marque Ducati.

Bradley Smith crossed the line in 10th place at the German GP, equalling the best result across the line of a KTM rider from Mika Kallio in Jerez earlier this year and his best result with KTM from Australia and San Marino last year.

Franco Morbidelli missed the German GP race due a left-hand injury sustained in a crash in FP3 in Assen. Hafizh Syahrin, his closest rival in the fight for Rookie of the Year, crossed the line 11th place, scored five points and took the lead from Morbidelli in the Rookie of the Year classification, now on 22 points.

The only one of the five rookies in the MotoGP class this year to have previously won at Brno any of the smaller is Tom Lüthi, last year in the Moto2 class and in 2005 in the 125cc class, which was his second Grand Prix win on his way to clinching the title.

Winning streak at the same circuit

The win for Marc Márquez in Germany was the sixth successive time he has stood on the top step of the podium at the Sachsenring, equalling his own record in any circuit from Austin this year and that of Giacomo Agostini at the German track. Only two riders have won more than six successive races at the same track in the premier class. 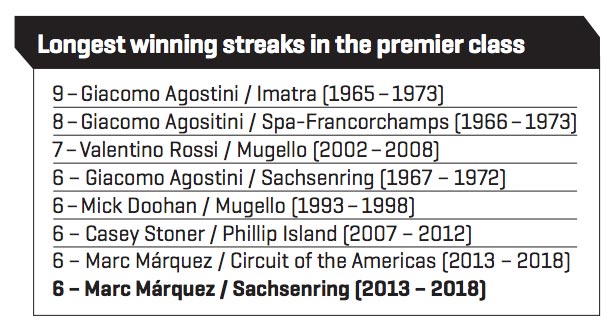 Marc Márquez’ win at the Sachsenring was the 66th of his Grand Prix career, just one less GP win than three-time MotoGP World Champion Jorge Lorenzo (67) as shown in the table below of riders with most GP wins.

There are just five riders in the history of Grand Prix racing who have taken more wins than Márquez.

In addition, this was the 109th podium finish across all classes for Marc Márquez, two less than Max Biaggi, who stands in eighth place in list of riders with the most podium finishes.

At the Czech Grand Prix, Marc Márquez is scheduled to make his 100th GP start in the MotoGP class, his 178th overall. At 25 years and 169 old on the race day at Brno, Márquez will become the second-youngest rider to reach the milestone of 100 GP starts in the premier class after John Hopkins (24 years 348 days old). 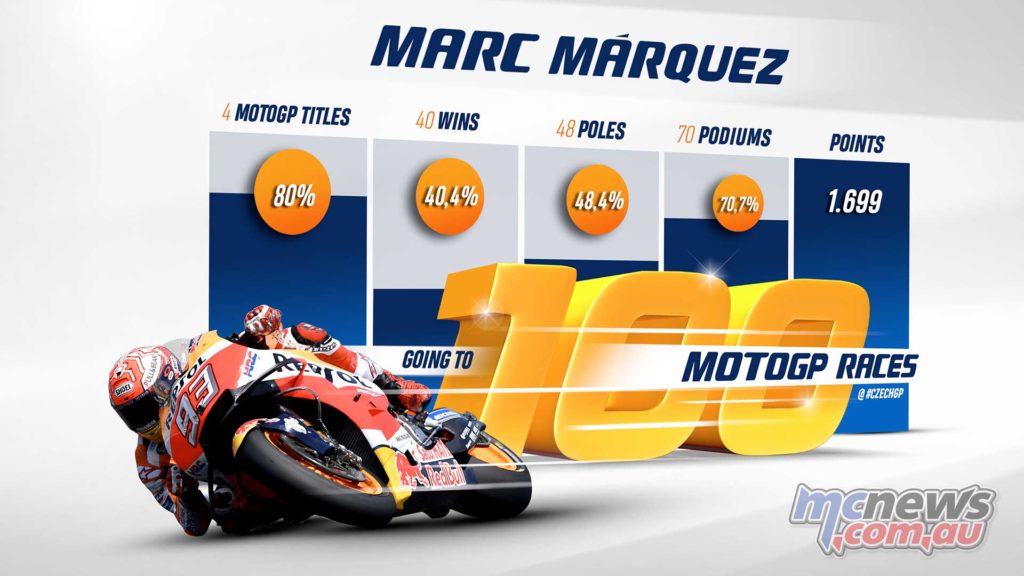 From his 99 starts in the MotoGP class, Marc Márquez has won 40 times, finished on the podium 70 times and qualified on pole position on 48 occasions.

Marc Márquez has had 80 top five finishes across the line in the MotoGP class. Only on six occasions he has been outside the top five across the line and on five of them, he crashed and rejoined the race: 15th at San Marino, 13th in Aragón in 2014, 13th at Le Mans in 2016, 11th in Malaysia – also in 2016 – and 16th in Italy earlier this year.

Márquez has shown great consistency since he stepped up to the premier class back in 2013, as shown in the following table comparing World Champions of the modern MotoGP era when they reached 100 starts in the premier class.

The 2018 Czech Grand Prix will be the 49th to be held at Brno and below are some facts and statistics related to the previous GP events at the circuit.

The only venue that has hosted more Grand Prix events than Brno is Assen in the Netherlands, which has hosted the Dutch TT in each of the 70 years of the Motorcycle Grand Prix World Championship.

The first Czechoslovakian Grand Prix was held at Brno in 1965. The 500cc race, held over thirteen laps of the original 13.94 km long road circuit, was won by Mike Hailwood on an MV Agusta in a time of 1 hour 11 min 23.2 seconds.

The last premier class race held on the road circuit at Brno was in 1977 and was won by Johnny Cecotto on a Yamaha. The circuit was subsequently considered too dangerous for large capacity machines.

The smaller capacity machines continued to compete in Grand Prix races on the Brno road circuit until 1982, before it was removed from the calendar for safety concerns.

This will be the 31st time that the current circuit has hosted a Grand Prix event, during which time the circuit has remained virtually unchanged. Only minor modifications were made to the circuit in 1996 which extended the length from 5.394 km to the current 5.403 km.

Since the first Grand Prix race in the premier class in Brno, Honda has been the most successful manufacturer with 18 wins, eight of which were in the MotoGP class including the last two years with Cal Crutchlow and Marc Márquez.

Yamaha have had 12 wins in the premier class including six in the MotoGP class since 2002 with Max Biaggi (1), Valentino Rossi (3) and Jorge Lorenzo (2).

Ducati have taken two MotoGP wins at Brno with Loris Capirossi in 2006 and Casey Stoner in 2007. The last podium finish for a Ducati rider at the Czech GP was 3rd in 2010 for Casey Stoner.

The last win by Suzuki at Brno was in the 500cc class in 1989, with Kevin Schwantz. Suzuki have had two podium finishes in the MotoGP class with John Hopkins, 2nd in 2007, and Loris Capirossi, 3rd in 2008.

The Moto2 race at Brno will be the 150th Moto2 race to take place since it was introduced as replacement for the 250cc class in 2010. Below are some facts and statistics from the 149 Moto2 races that have taken place so far:

34 different riders have started from pole position in the Moto2 class. The four riders with the most Moto2 poles are: Tito Rabat (16), Johann Zarco (15), Marc Marquez, Pol Espargaró (14) and Sam Lowes (8).

Title contenders battle to the flag at Misano