Royal Enfield have just lifted the covers off two very special motorcycles to celebrate the 120th anniversary of the brand. The Continental GT and Interceptor INT limited editions will be available in strictly limited numbers for $14,490 and $13,990 ride-away respectively, with a three-year warranty and roadside assist included with the deal in Australia.

Just 60 of each variant will be available between Australia, Japan, Thailand, Korea and the Philippines, with four distinct regions around the world each receiving 120, for 480 produced in totality worldwide. And in less than 24 hours after posting about their arrival, the entire Australian and New Zealand allocation of the machines have already sold out.

“Since launching this exciting news yesterday evening (7th April 2022), there has been an overwhelming response and all units have now been sold out. We look forward to seeing these iconic pieces of Royal Enfield’s illustrious history make their way onto our roads, and into our riding communities.”

Anuj Dua of Royal Enfield explained the choice to focus on these models was a reference to the brand’s modern history, as well as the strong global reach of the Royal Enfield 650 twins and the communities built around them. 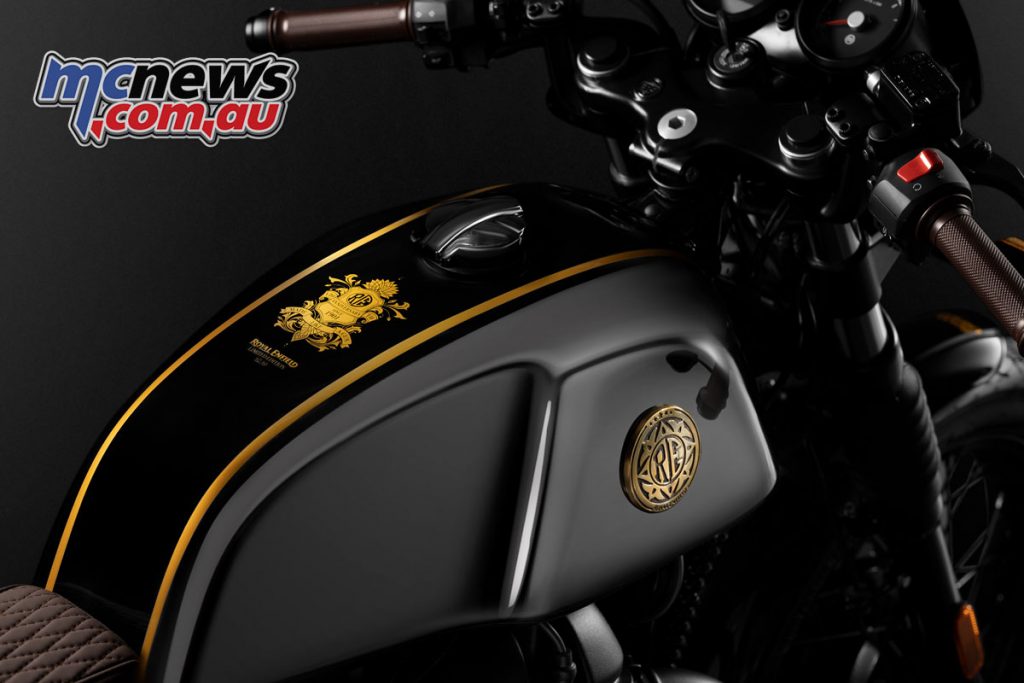 The design focus on the Royal Enfield Interceptor INT and Continental GT 650s was to harken back to the brands early production, where handcrafting was the norm, and as a result we’re seeing a few distinct features on these models, including the engraved logo by the Sirpi Senthil family, as well as in the pinstriped tank, which is hand painted.

Both models are eye-catching to say the least, and it looks like Royal Enfield have pulled out all the stops when it comes to production quality, with both featuring a blacked out colour scheme, with a special chroming technique used for the tank.

In contrast the vast majority of the bike is blacked out, including the engine, silencer and fast majority of features, while genuine accessories will also be fitted, with Royal Enfield mentioning flyscreens, engine guards, heel guards, touring and bar end mirrors in particular.

The seats are also a new design, hand stitched and running a new material to further differentiate them, while special decals are also found on the tank and underseat panels. The model name is shown on those underseat panels, while the tanks run a special commemorative decal and also include the numbering of the bike, which will be out of 60.

Those decals also received some special attention in the development stage, particularly the prominent design on the tank, which is gold leaf and matches those hand painted pinstripes.

Another feature which is slightly different is the grips, in a different colour, while Anuj Dua did confirm that there’s been no other significant changes to these models over the standard models, except for a few tweaks that were required for the blacked out components.

When asked whether boosting performance was ever on the table during the development of these models, the answer was a firm no, with the focus being on delivering something visually special, and essentially a piece of motorcycle art.

There’s little doubt the Royal Enfield 650s have been so successful due to very competitive pricing, with 12,000 apparently sold in the Asia-Pacific region since their introduction, while these 120th Anniversary special editions are definitely more of a collectors item by the looks of it.

Riding and reviewing motorcycles for sometime now, Kris writes for MCNews from time to time while also being an awesome allrounder helping to keep the sire content flowing