Race One at Winton this morning proved a clear test of tyre longevity.  Wayne Maxwell put in the most measured performance to take victory on his Pirelli shod Yamaha, but Robbie Bugden and Cru Halliday finished extremely strongly on their Dunlop shod bikes, getting the better of Pirelli runners Troy Herfoss and Daniel Falzon as the race reached its final stages.

Plenty of homework would have been done in the pit garages between then and now, as they all try to reach the ideal compromise over the 16-lap race distance, on what was a track a few degrees warmer than what it had been in race one.

It would also prove to be a game of controlled aggression from all the top riders, needing throughout the entire race to carefully balance restraint against early speed, less they be left with nothing on the final run to the flag…

As the lights went out it was Troy Herfoss that got the clutch perfect to take the race lead into turn one and his Crankt Protein Honda teammate Bryan Staring also scored an excellent holeshot to make it a Honda 1-2 at the front of the field. Wayne Maxwell and Cru Halliday have chase ahead of fifth placed Daniel Falzon and sixth placed Josh Waters.

Herfoss recorded a 1m25.766 from a standing start to notch a seven-tenths of a second lead over Staring as they started lap two. Staring, in turn, had half-a-second on Wayne Maxwell.

Robbie Bugden was a somewhat slow starter, in ninth place behind Alex Phillis for this early period of the race. A little ahead of that pair Josh Hook and Josh Waters were trading places, Hook somewhat of a wildcard this weekend as he gets his head around riding the booming Ducati Panigale R, that wildcard made more interesting by the fact that Hook is running Bridgestone tyres on the Racer’s Edge Ducati this weekend. 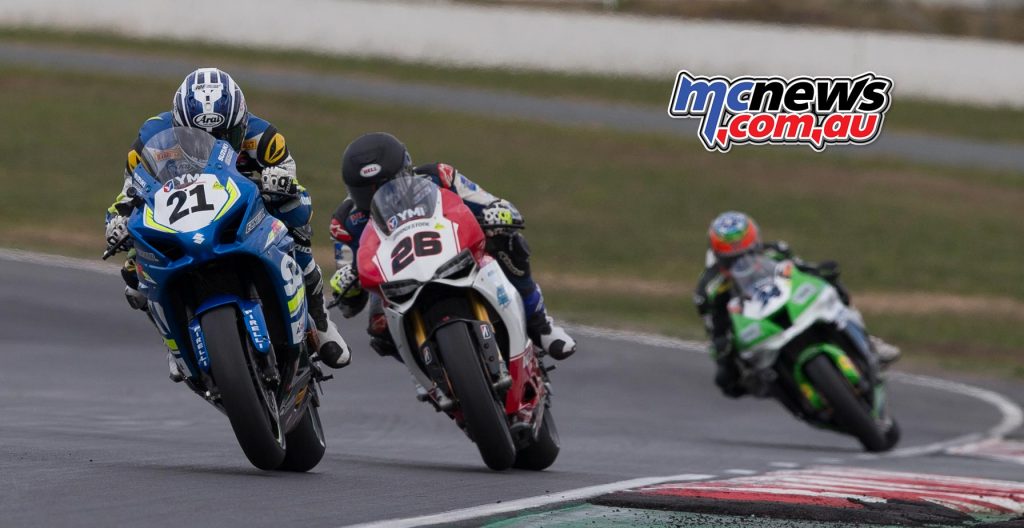 Waters managed to pull away from Hook and then promote himself further up the field to fifth place with 12 laps to run after sneaking past Falzon.  The next lap though Waters lost that position and some ground, and was back doing battle with Hook. Bugden was still in eighth place. 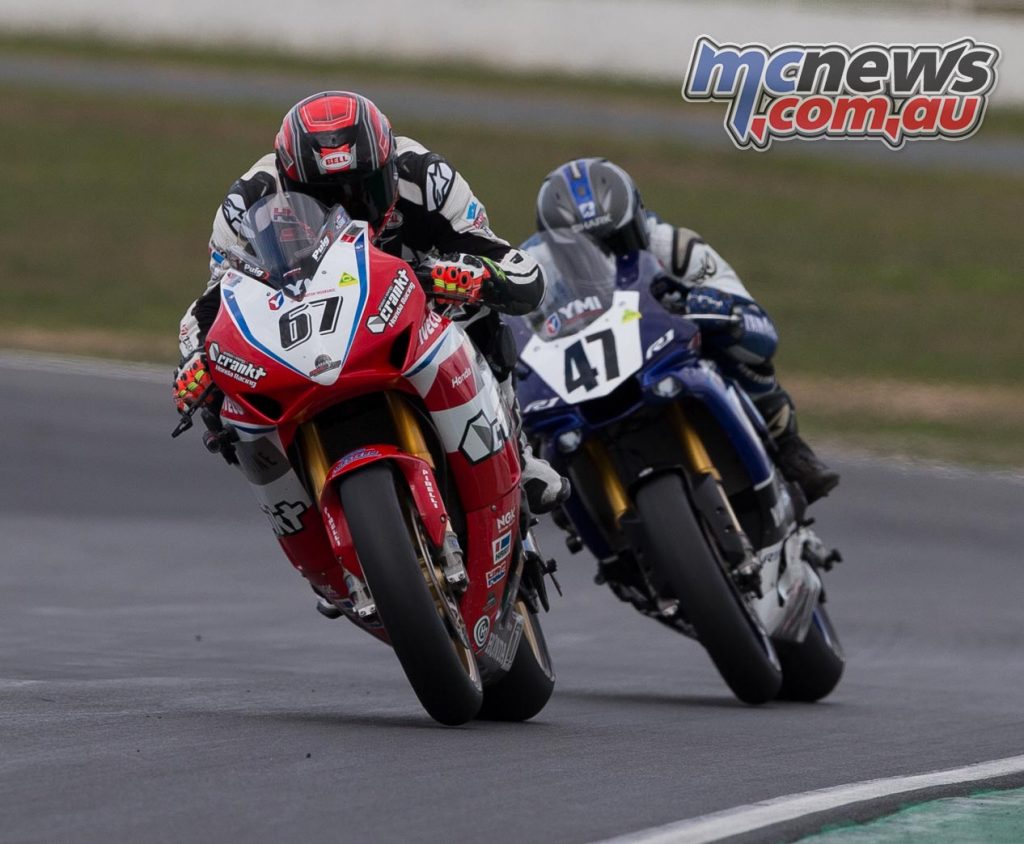 Maxwell then edged ahead of Staring for the first time, but the Honda man took that position right back on the next change of direction. Herfoss was untroubled by those battles unfolding behind him, the defending champion enjoying a two-second buffer over his pursuers with 11 laps to run.

Maxwell finally managed to get the better of Staring with ten laps to run. Next target Herfoss, but that gap now a massive 3.17-seconds with nine laps to run. Herfoss was showing no signs of slowing by putting in a 1m20.895, only for Maxwell to gazump him with another new race lap record, 1m20.834. The gap to Herfoss then came down further to 2.5-seconds next time across the stripe as Maxwell backed up that lap record with a 1m20.855, pulling more than half-a-second out of Herfoss.

With six laps to run Maxwell lowered the benchmark once again, 1.20.789 to Maxwell pulling another eighth-tenths out of Herfoss and continued his march forward in every segment to chase down the Honda man. A 1m20.688 next time around propelled Maxwell right on to the tail of Herfoss and then slipped past Herfoss on lap 11. With the ease that he chased Herfoss down and then passed him, it appeared that Herfoss would have no answer for his old sparring partner.

Bryan Staring was still holding down third place, but only by the skin of his teeth.  Halliday and Falzon were all over Staring with four laps to go. Both that pair made their way past Staring on the next lap, pushing the #67 Honda back to fifth place, but with a 1.5-second buffer to sixth placed Robbie Bugden. That buffer disappeared quickly though and it was not long at all before Bugden had pushed Staring further back to sixth position.

At the front of the field Maxwell had buttoned off somewhat, his laptimes back out to mid-high 1m21s. Herfoss a second behind Maxwell and running a similar pace, but with a seven-second buffer over Cru Halliday, who had Falzon still trying to chase him down for the final step on the rostrum.

At the last lap board Maxwell had 2.5-seconds over Herfoss, and the win in the bag. Herfoss settling for second as he didn’t have the fight in the package to take the battle up to the #47 Yamaha. A stellar weekend for Maxwell, a new pole record, a new race lap record, and a 51-point haul from a perfect weekend. That is good enough to promote him up the championship standings to a joint second place with Troy Herfoss. 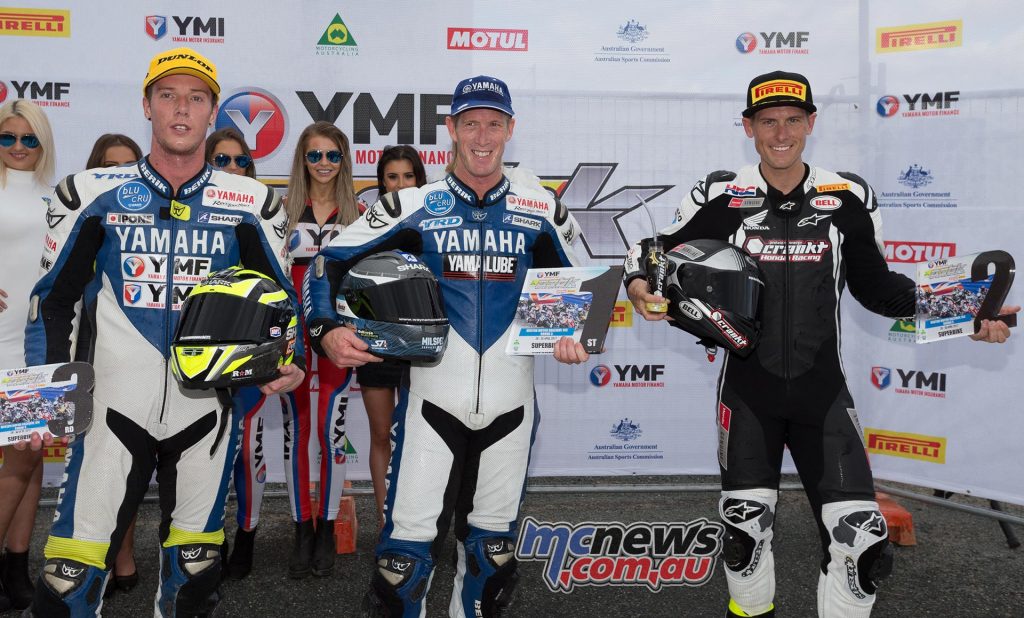 Cru Halliday rounded out the podium with a 1.8-second buffer over fourth-placed Falzon. The South Australian though retains the championship lead, and it sees it only trimmed to nine-points, still a signifcant advantage.

Josh Hook carded sixth place on the Ducati, a great debut with the Racer’s Edge team.

ASBK moves north to Darwin next time around, where round four of the YMF ASBK Championship will be played out on the weekend of July 7-9.

“(Race One) I’ve got a fair bit of red paint on my Yamaha after that first race! It’s close but Troy and the rest of the front runners have a relationship where you can race side by side at high speeds and all come back and talk about it, we’ve got the win and I’m happy about that. (Race Two) “At the start when I saw Troy (Herfoss heading off into the distance I thought, wow I’ve got some work to do here. I wasn’t making any inroads on Bryan (Staring) early on as well. Then I had the strategy of finding the rhythm and the flow, then the bike came to me in the second half of the race. I had to put a hard pass on Troy (Herfoss) but I made it stick!”

“It was a good race, I didn’t really plan on going full gas at the start of the race. I was hoping to lose the hole shot to Wayne and see how his tyre would last for the duration of the race, whether that would have worked I’m not sure. With Bryan (Staring) behind me with a half second gap, I thought I would go at 100% and try to break away on my own. The tyre held up better in the second race but when Wayne (Maxwell) caught me, I knew I wouldn’t have much fight and I was really struggling at that stage but thanks to the Crankt Protein Honda Racing team, they’ve done a great job.”