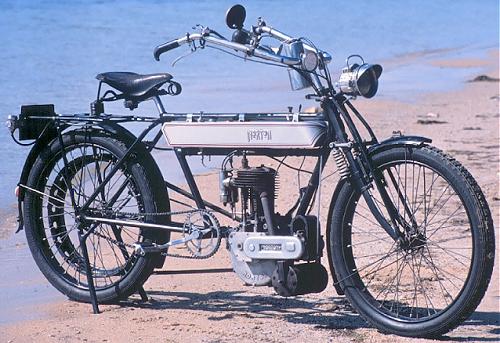 Norton is without any shadow of a doubt one of the most prestigious names in the entire history of motorcycling – if not indeed the most prestigious.
Some amongst us can remember back to the glory days of the Manx Norton and the featherbed frame, while a few elite individuals can even recall the dominance of Norton in the equivalent of today’s World Championships in the 1930s.

Incredibly though, Norton’s history began much earlier, with this 1908 model from Western Australia believed to be the World’s oldest surviving complete (i.e., Norton engine and Norton frame)
Founded by James Lansdowne Norton in England, the company’s very first motorcycle appeared in 1902 using a French Clement engine in what was essentially a bicycle frame.

Peugeot’s V-twin powerplant at the time soon replaced the Clement, with Rem Fowler using such a machine to win the very first Isle of Man TT Twin Cylinder race in 1907.

By 1908, James Norton had begun to manufacture and use his own 480cc and 635cc side valve single cylinder engines, although Vintage experts will no doubt have a field day arguing the point as the history books are highly inconclusive as to the exact cc of Norton’s very first engines.

What cannot be argued however, is that the 82mm bore and 94mm stroke marked on the crankcase of this particular piece of Norton history produce a cc of 496.42, and that’s a size not to be found in any book.

So, not only is this very unique machine rare on account of its age and completeness, but it also appears to be carrying the very first Norton ‘works’ engine !

James Norton was actually something of a technical genius and, believe it or not, had designs for bevel driven cams and nuclear powered machinery!

It’s hardly surprising therefore that this first generation pure Norton carries some rather advanced features for its time. The most innovative of these is that the exhaust valve chamber is isolated from the cylinder wall by an air duct which removes conducted heat directly to the exhaust port. The exhaust gases themselves are disposed off more rapidly and effectively than in other engines of the period thanks to the exhaust port being designed for unhindered and quick gas flow. In conjunction with a straight exhaust pipe, local overheating is avoided. 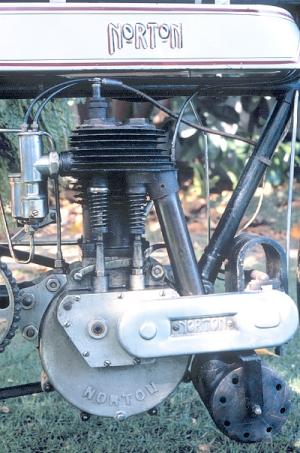 Norton’s first engine is otherwise a typical side valve with exposed push rods ‘wrapped’ in return springs and a dry sump fed by a plunger pump on the combined fuel / oil tank which the rider must occasionally operate whilst riding. The head and valves receive no lubrication other than what the rider can apply before the journey begins!
The fuel and air mixture is fed into the top of the cylinder from a carburettor which, although crude by today’s standards, certainly looks the part. There’s no air filter or even bell mouth, a simple brass slide on a spring allowing more or less air in and controlled by one of two levers atop the right handlebar. The other lever controls the amount of fuel drawn in of course.

Starting the bike requires guessing a basic ‘rich’ mixture with these two levers, as well as pulling in the decompression lever which is found where most clutches are situated these days – under the left handlebar for those who don’t know.

When all of these controls are set, pedal power is utilised to get the bike moving and then its a simple case of dumping the decompression lever. You might not believe it, but generally this old girl starts very well.

Ignition retard and advance can have an effect on how the bike runs too, a lever on the left hand side of the fuel / oil tank connects to a metal rod which runs down to the forward mounted magneto. Driven from the exhaust cam, the magneto simply provides the spark plug with electricity.

By 1908, motorcycle manufacturers were starting to improve on the concept of attaching engines to modified bicycle frames. This particular motorised bicycle actually uses the frame as a stressed member, with plates on the front and rear of the crankcase attaching to the frame tubes.

Simplistic too are the bicycle brakes on the front, the pedal operated rear open drum (?!) stopper and front suspension. The latter is, however, somewhat intriguing.
What appear to be bicycle forks, reinforced with extra struts, pivot up and down the axis of the steering column. A triple clamp of sorts connected to the bottom of the steering column has vertically mounted springs either side which attach to and provide suspension for the front forks.

The rear end on the other hand is not so advanced, a sprung seat the only form of suspension thanks to a rather rigid rear end.

Interestingly, this lack of suspension has a bearing on the performance of the headlight. The word lamp is probably more appropriate, as acetylene crystals are mixed with water in a canister between the handlebars and the resulting gas is lit at the headlight, er, sorry, lamp. The rougher the road then the more agitated the mixture in the canister becomes with a resultant improvement in the flame.

The passage of time might well have aged this 1908 Norton, yet it oozes as much if not more character as machines less than half its age. It’s interesting to consider too, that all through its history, the Norton name was at the forefront of technical innovation, even right up until the rotary of the 1980s.
Oh, and there’s one last thing we forgot to tell you. This particular machine still runs today and as yet the engine has never been touched. In fact, the head has never once been off it – let us know in 100 years time if your Hayabusa is still running !!!