by Wayne Vickers
in Yamaha News, Yamaha Reviews
A A
Share on FacebookShare on TwitterShare

Cross-plane cranker gets naked and cranks!

How good’s this? KTM’s outstanding 1290 Super Duke R one week, Yamaha’s top spec’ MT-10 SP the next. Arguably two of the best naked sports bikes of the current crop. I’d go a step further and say two of the best current sports bikes period. After spending time on these, I’ll be honest and say that I’m not sure why anyone would pony up for a full faired thoroughbred for road use instead of one of these puppies, unless they were doing regular track days. Anyway, let’s get to it.

The MT-10 SP. What are we looking at here then? It’s essentially the cooking model MT-10 with extra special sauce Ohlins ERS front and rear as well as the flash TFT screen from the R1. The Ohlins ERS (Electric Racing Suspension) bit means that they not only do some techno wizardy that constantly monitors and tweaks the compression and rebound settings for the optimal ride, but it also lets you adjust the overall settings on the fly yourself. It’s a serious bit of tech. And they’re seriously good. I reckon they work best when you’re hard at it – and on rough back roads you’ll want to nip through the first few settings from A, to somewhere in the M range. I found the A settings just fine on smoother roads though. Bloody good in fact.

And the TFT dash has some very trick additions. It has a road mode and a track mode track mode enabling lap timing and displaying best lap or previous and a host of other options. The mode selector (on the left hand side switchgear) allows you to adjust ride modes, power maps, traction control and suspension presets all quite quickly and easily. I’m still not a fan of the multi-function scroll wheel on the right hand side or its interface on the TFT, with more options and screens than ever, but that’s a minor bug bear really. The overall screen layout is pretty solid.

So how’s it ride? Well, compared to the R1 which of course shares its epic cross-plane engine, the SP is a far more accessible option. With a far more comfortable upright riding position and seat, it’s a legitimate commuter and tourer as well as a weekend scratcher. And it positively LOVES pointing the front wheel towards outer space. I reckon if Yamaha put a fairing on this, it would be the modern equivalent of older generation Honda VFRs. Which sold by the boatload. Just sayin.

Styling wise the front end treatment is certainly distinctive. I reckon it’s trying to be as funky as the old K1300R, but it looks a little transformerish to me. Like a blue bumblebee. I personally think it would be better off with a more standard looking headlight set-up. Yamaha have had some nice ones over the years like the older FZ1-N for instance. Either way… looks are subjective and when you’re riding it you are not going to be looking at it unless you are in the process of crashing…

But you do notice the engine. I’ve written about the cross-plane donk before and hopefully will again soon, but my god it’s good. And combined with the R1 quick shifter it’s just ridiculous. The MT-10 is tuned more for torque than the R1, with peak torque of 110 odd Nm coming in at 9000 rpm. There’s about 160 ponies on tap too. On the road there’s serious surge from 5,000 rpm which you’re sitting just below at highway speeds in top gear. Big hump. Right off idle. It’s addictive. And the soundtrack is sublime. I personally preferred the B mode map 2 which I found an ideal blend for performance and shenanigans. It wasn’t quite as aggressively tuned as A mode and the map 2 just softened the throttle ever so slightly, allowing for more controlled lofting of the front 🙂 Speaking of, it’ll happily hold up the front in fifth… ahem.. so I’m told… Bonkers.

Steering wise, the front end is probably the only part that I reckon could do with a tweak. It felt to me like it was a touch over done on the steering damper side of things. Made it feel a little heavier than I’d prefer. You really notice it when pushing it around on foot and at low road speeds. That said, it diminishes somewhat as the speed rises and the result is a front end that feels dyna-bolted to the road, it’d just about take a hit with a bus to put it off line. I reckon it’d be pretty ace on a tight track… Combine it with the very effective traction control system borrowed from the R1 (I was happy with setting 2), and you can really take liberties when getting up it. On the right bit of road I regularly found myself exiting corners with the back squirreling ever so slightly for grip before catapulting me towards the next bend. Not once did the front protest or even wriggle.

It’s no lightweight either. With a wet weight of 210 kilograms it has a certain solidity to it, which no doubt helps the planted feeling of the front end. You do feel the heft when tipping into corners. Not a lot. And it’s not heavy per se, but it does tip in slower than you might think. However, it’s uncannily stable for a sports bike.

Anything else? The fuel gauge has the same quirk as the R1 in that it only shows full, then half full, then finer increments below half. Weird. Makes planning longer trips with bigger gaps between fill-ups a little more taxing if you don’t remember to re-set the trip meter. Oh and speaking of fuel – it doesn’t mind a sip of the good stuff. You’ll be filling up before you get to 250 kilometres. The fuel light was coming on for me just after 200 km – and I was putting in about 14-litres worth at 220 km. Its an 18-litre tank so you’d get another 50 km or so more than that depending on how full to the brim it was when filled. So it’s acceptable, but not great. That means a daily top-up for me. Not that it matters much when you have that engine at your fingertips. Oh – I do think something with an SP badge should come with a nice muffler too. But maybe that’s just me.

There’s very little to fault with the MT-10 SP. I reckon it could quite possible be the best bike in the Yamaha fleet in fact. I’d have one as a sporting road bike option before the R1 nine times out of ten. And I’d be able to comfortably use it every day. Commute on it. Load it up and do weekend tours on it. And still take it to most tracks in the country and have a blast. It would only be left wanting on the fastest flowing circuits like Phillip Island where fairings come in a bit handy…

It’s a ripper. Going back to the intro and the comparison to the new (not quite here yet) KTM 1290 Super Duke R. Is the MT-10 SP better? They were line-ball last year with a split vote from MCNews, but I think team orange have moved the game on a bit since then… That said the cross-plane engine has a distinctly additive character that will win plenty over. In truth they’re both great rides. And both have slightly different personalities. I think it’d come down to your own riding style, aesthetic preference and any brand allegiance you had.

Ride both. Pick a colour. Toss a coin. Pick an engine you like the best. Consult the 8 ball. Either way you can’t go wrong. Have I mentioned we’re spoilt for choice as bike riders before? 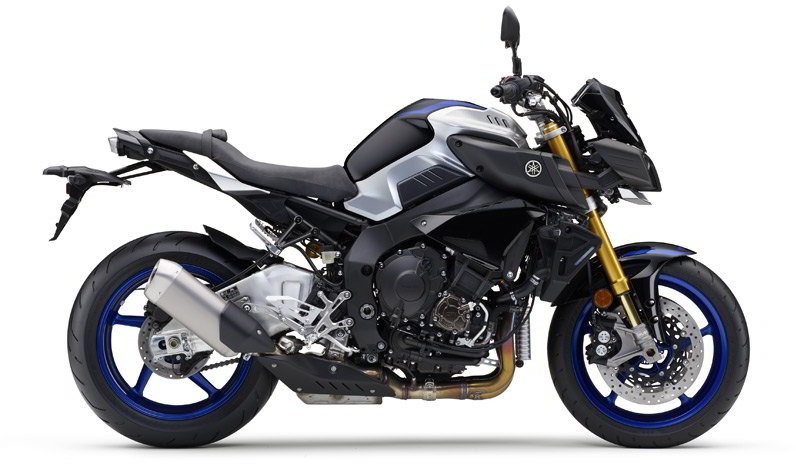 Wayne loves all things motorsport, but lives for two wheels. Mountain bikes, dirt bikes, adventure bikes, road bikes, race bikes, the lot. An ex riding coach and road racer wannabe who simultaneously ran out of talent and money. Rides about a million kilometres a year and has been known to enjoy an occasional wheelie.

Yamaha hasn’t given up on the two-stroke yet!

Jake Gagne makes it two for two at Minnesota MotoAmerica