‘Yeah she’s a bit different’ has quickly become my go-to response to the inevitable, “what the hell is that?” when people get a first look at the Niken GT. Both riders and non-riders alike are intrigued. Fair enough too I guess – it’s an odd looking jigger. And I must admit I was sceptical.

It seemed a bit like an engineering solution to a problem that didn’t exist… and I struggled to understand exactly who it was aimed at. Sure it would have more front end grip, but it’s not a sportsbike, so why bother? I was keen to find out.

First impressions weren’t great to be honest. As I made my way along the footpath after picking it up, the first thing that stood out was that low speed maneuverability is not a strong point… Surprisingly the steering itself doesn’t feel heavy, on the contrary it’s remarkably light when considering the mechanisms and linkages tucked away under that front end, and swinging about underneath the bars.

But the front-end does feel a little top heavy and a bit vague. Due to the amount of damping going on, your inputs are delayed then amplified at low speeds – so I was wobbling about a bit at low speeds when filtering in between cars and needed fine low-speed control. There were some unsavoury words muttered under my helmet…It felt a little awkward, which I guess should be as no great suprise when it is nearly 270 kilograms wet.  It seemed to run pretty hot too when sitting/crawling/filtering in among traffic for extended distances.

It’s positively huge in front of you as you sit on it. I’ve never ridden a snowmobile, but I imagine the view would be pretty similar… Big tall screen providing plenty of wind protection. And the whole front fairing draws gradually into the tank shape in front of you, which sits surprisingly low when you’re on the bike.

You’re very much sitting on the top of the bike, as in the tank doesn’t rise up in front of the seat as I thought it might. Could easily have had room for a bit more height and some extra fuel there actually, but I wonder if Yamaha were trying to limit the amount of weight that’s carried up high. Pity really, as I saw only 300ks range from the 18L tank. So the range isn’t as great as I’d hoped it might be. Quite like the satin blue colour though. Much easier on the eyes than the all black ‘regular’ Niken. If you can ever call a Niken ‘regular’…

It didn’t get much better as I started exploring the do-dads at my fingertips. If the dash on the Duke 790 and BMW F 850 GS were examples of doing it right, the LCD dash on the Niken is at the other end of the spectrum. I found it visually cluttered, hard to read on the go, and reminded me of a cheap ‘80s Casio digital watch I had when I was a kid. Lots of lines and shit going on that actually made it harder to read.

Combine that with switchgear controls that were neither well labelled or all that intuitive and it did take some adapting. It took me several minutes of trial and error to figure out how to turn off the heated grips (which have three settings and work just fine), and by the end of the first day I still hadn’t found the distance to empty display on the trip meters. I did find it later – sort of. A third trip meter appeared automagically when the fuel light came on. ‘Trip F’. But it counted up instead of down, as in the number of kays since the fuel light came on, rather than a range to empty.

However, it was once out of town on the highway, that I started to notice how well the front end rides over undulations and bad surfaces. The two 15-inch fronts positively soak them up. I mean, it should I guess when you think about it, with twice the fork and tyre of a ‘normal’ front end. When this became apparent from the cockpit, I started to just maybe understand why they might have gone down the twin front-end path.

At times the ride is so smooth that you could be forgiven for thinking the front end was floating – and as you can’t see any sign of the forks or wheels under that huge fairing there’s nothing to change that impression. From that perspective the front end works brilliantly, and there’s certainly bucket loads of grip.

I’d need more time to explore its full capabilities before I could make a call on whether the compromised low speed issues were an acceptable trade-off for me. But once on the open road it’s certainly a pleasant thing to roll along on. It’s almost unshakable mid-corner, one side can hit a decent sized bump and it’s barely noticed.

It takes a proper whack to get the front end to wriggle, which feels a bit different to a conventional setup, as the wriggle oscillates a little between the three touch points, but to be fair that happened pretty rarely – and only on big hits that would have properly upset a two-wheeler. So open roading gets a tick.

And then came the gravel road.

Now ‘my’ gravel road, admittedly can be a bit of a sandy handful at times. And it’s awfully dry right now with car tyre ridges that pull you off-line on regular bikes. I’m pretty comfortable on it and don’t mind a bike moving around – after all I do nearly 10 kays of it every day. But the Niken was in another league altogether.

Because the tyres aren’t in a line front to rear, you end up having them hit different parts of tyre ridges – the front pulling one way and the rear the other. Then they’d swap, then both go the same way. It was like riding a bike that was pivoting in the middle like an articulated loader. Especially in bumpy dirt corners, where it would weave about all over the shop like a drunk pirate.

So. If prospective buyers are thinking of doing gravel. I’d avoid it, well if it’s sandy or deep gravel anyway…

The engine is pinched directly from the MT-09 which Trev has covered plenty of times (with only minor tweaks and a heavier crank for the Niken), so I won’t dwell on it too much other than to say it’s a ripper. I love it. It pulls clean and hard all the way through the rev range. Sounds ace too.

Accelerating away from intersections and snicking up through the gears is a proper delight and makes good pace. Both the gearbox and quickshifter (up only) are terrific. Both at full throttle or part throttle the upshifts are seamless and there’s no interference at all on the downshifts via the clutch like some other quick shifters I’ve sampled recently. Lovely.

Up it for the rent and that forward urge drops off sooner than I thought it might given how hard it pulls at any legal speeds, but that might be due to the extra weight and overall frontal dimensions that are being pushed along. Massive tick here.

Front brakes are two single discs on the outside of each front wheel and my initial impressions where that they probably weren’t strong enough for such a heavy bike, but I’ve changed my mind there. They actually pull up the bike pretty well, when I started looking at the distance I was pulling up in. It’s a bit deceptive because that whacky Ackerman front end doesn’t dive much under brakes, so you think they aren’t biting as hard as they actually are… Proper stable under hard braking too. Another tick.

The ‘semi-soft’ luggage fitted to the GT are a simple enough setup – with sturdy zips giving access to 25L storage on each side. And the bike is already bloody wide, so they tuck inside the width of the front. Not sure if they have an option for a top bag.

So. After a 1000 kilometres week on the Niken GT, what do I reckon?

Trev quite enjoyed his blast around the South Island of New Zealand on the Niken, but he’s a nut-bag (love you boss). I’m still scratching my head a bit though as to who’s going to buy them. Mind you I dunno why people by Cam-Am Spyder’s but they do, so taking that into account – this is shit tins better than a Can Am will ever be so maybe it will wedge some wallets open.

Despite the marketing blurb, it doesn’t actually have sportsbike agility, it does almost weigh as much as a cruiser after all… And despite massive front end grip – it doesn’t give a huge amount of feedback, so isn’t nearly as involving for a really sporting rider as you might think.

It also doesn’t have the range I’d have expected either from something being sold as a tourer. But as long as I wasn’t intending to commute on it that included a tonne of lane filtering, or ride it on soft sandy roads, then it could well be a viable often for someone looking for a ‘sports tourer’ with a bit of difference.

I reckon it would go fairly well fully loaded up with a pillion and full luggage – including whacking a top box on there. That front end would take it all in its stride and it’d be a fairly simple thing to punt along at reasonable speeds. I don’t do pillions, but having ridden with some fairly quick two-up riders, I wonder if this could be its strength.

From a cornering perspective I found that it seemed to suit it best to just tip it over and lean it in, shifting your weight off the bike very far felt odd and unnecessary – I guess due to the size and weight we’re talking about here – so if you like sitting prone on the bike then this might be right up your alley.

The question is – is it any better than a more conventional sports tourer – of which there’s plenty of options to consider in the low 20s range where this is price-pointed, and many that are considerably cheaper. Yamaha’s own Tracer 900 GT for instance – with the same engine and about 50 less kilos is around five grand cheaper… If you just love the concept, the look, and enjoy the feeling of riding something a bit different then maybe try one on for size yourself. Just that with a lot of my riding taking in a fair bit of city work at low speeds, it’s not really the mount for me. As an open-road touring bike though it does pose a reasonable argument in its favour. 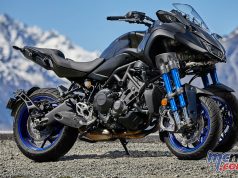 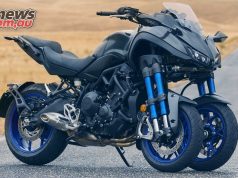