by Trev
in Yamaha, Yamaha News, Yamaha Reviews
A A
Share on FacebookShare on TwitterShare

Okay, let’s get some things out of the way first

Yes the headline was a poor allusion to Animal Farm

Yes it rides pretty much like a motorcycle. There is no long adaption period to feel comfortable, just get on it and ride.

The riding experience is nothing remotely similar to the non-leaning Can-Am Sypder. The Niken leans, steers and powers out like a motorcycle, unlike the Spyder which rides like, well, a car, and a shit car at that.

Yes the Niken can pull wheelies, stoppies, skids and perform all manner of stupidity, if you’re good enough to do so without dying.

Yamaha quote a 45-degree lean angle for the Niken, and yes you can get your knee down if you are going to hang off it to a ridiculous degree. That said, using a reasonable bit of body English does help keep the pegs off the deck and realise more cornering speed, just like a motorcycle…

Yes you can lane split, and quite easily. The widest point of the bike is still the bars/mirrors and you know once that front end is through then the rear is most definitely going to roll through without a problem. The Niken is 70 mm wider at the mirrors than a T-Max, and 120 mm wider than a Tracer 900.

It does not stand up by itself. The Niken will fall over if not placed on the side-stand or optional centre-stand.

Now with that out of the way and for those of you that have an open mind and are still reading, instead of throwing a pretentious little hissy-fit about it having three wheels and clicking away to somewhere else, let’s dig into this leaning three-wheeler business a little more.

I first tried out such a machine more than a decade ago when Piaggio launched the MP3 scooter. I quite liked it, revelling in the incredible front end grip the twin-tyre front end offered. But of course with modest power and a CVT gearbox it was still essentially a scooter. A fun, practical and versatile scooter that I rate highly, but still a scooter.

However, the Niken is a considerably more serious piece of kit.  Even the name carries a bit of attitude to it.  Two Japanese words Ni (Two), and Ken (Sword), is derived from a 17th century dual sword fighting technique. Well the Niken would want to be sharp then wouldn’t it…?

The drivetrain is lifted directly from the MT-09, one of the maddest motorcycles to be released this century.

The Niken gets the full monty 115 horsepower of the MT-09 and while 115 ponies doesn’t sound all that much these days, the slightly uncultured way that Yamaha’s enigmatic triple delivers them makes those ponies feel a little more Clydesale-like. In Niken guise the MT09 engine does carry a bit more crank weight, which is no bad thing, and its throttle response is a little smoother in operation than the manic naked.

A conventional six-speed motorcycle gearbox complete with quick-shifter, which is unfortunately up only in this application, carries over from its two-wheel siblings, as does the chain final drive. The rear sprocket carries a couple more teeth to help counteract the extra weight of the Niken.

When jumping aboard the low 820 mm saddle and lifting the Niken off its side-stand the machine does not feel particularly heavy. The mass is also not felt at the lights or while manoeuvring at walking pace, the larger foot-print of the twin-tyre front end no doubt helping in those scenarios.

Yamaha claims that with a rider onboard the Niken has a perfect 50-50 weight distribution between the front and rear axles.  I would say that feels about right as the Niken exhibits no untoward handling traits, and feels perfectly natural when scything through bends at speed.

Due to the gyroscopic forces generated by those two front tyres up front it also proves unflappable and affords great stability. Steering effort is light enough, and the Niken only ever feels slightly cumbersome when negotiating really tight sub-20 km/h corners. The longer and stiffer swingarm contributes to a 70 mm longer wheelbase than the MT-09, the Niken is also 10 mm longer between the axles than the recently released Tracer 900 GT.

Front grip is other-worldly. Yamaha claim the Niken offers up to 40 per cent increased front-end grip. It feels like all of that and more, you quickly start carrying entry speeds on less than perfect road surfaces that would be risky, heart-in-mouth type stuff on a conventional motorcycle.

The fact that those front wheels move independently of each other (on a camber, one front wheel can be running at a very different level of travel through its fork legs than the other), is another positive trait highlighted on bumpy surfaces. The Ackermann dual parallelogram front end just copes with any irregularities thrown at it. You are hardly aware of all those extra front end components doing their thing, it just works and is all completely hidden from your view. The unique front-end set-up also feels as though it completely eliminates any semblance of understeer.

Of course all this confidence in the front end of the machine pretty much turns your approach to back road corner carving on its head.  When approaching a tight corner on a conventional motorcycle my concentration is predominantly on judging the road surface which, along with testicular fortitude, largely decides entry speed and aggressiveness on turn-in. While coming out the other side, the grip of modern tyres means it is largely a “hit the throttle hard as soon as you start picking the bike up off the rear tyre and see the corner exit” type affair.

From the apex of the corner is when you start really thinking about grip and the Niken’s purchase on the road, particularly when you really start to press on while chasing a skilled local on an MT-10. Here the Niken did not really do anything wrong, but I was certainly starting to get a little apprehensive in regards to rear end grip when attacking both low speed and high speed corners with some real aggression. Out of some of the tighter stuff the traction control was starting to impede progress and reign things in.

I am sure there was plenty of rear grip there, but the mass and the lack of feedback from the chassis in this scenario did not instil the type of confidence that I was enjoying from the front. I guess with less contact patch at the rear that is to be expected. The Niken could never be expected to be a perfect panacea for every scenario.

In any normal riding of course rear grip is plenty, but I was not game to start trying to drift the rear at lean, it felt as though when it did finally break away it might not have been all that pretty.  I did slide the machine a little on dirt roads, but was certainly much more circumspect than I would have been on a normal two-wheeler, and that surprised me. I think a combination of the different ergonomics providing less response to peg inputs, and that extra weight, was enough to make me a little more cautious than I might otherwise have been. Perhaps a lot more seat time would have me more game to let it all hang out.

A pair of 298 mm disc rotors and four-piston calipers do a great job of hauling the machine up, while those two independent front tyres give you the confidence to turn-in late and hard.  When really on it, and I mean really on it, I had those two front tyres squirming into the grey tarmac of the Crown Range descents under brakes. I could feel them walking about a little even before the well-tuned ABS system kicked in. The front Bridgestone A41 Adventure tyres were at their recommended 33 psi, I checked them myself, but if going full nutter again I think I might be tempted to try another couple of pound in them.

The riding position for normal riding feels natural enough, be that in the city or on the highway. Despite only that tiny little front spoiler above the digital instrumentation, the wind-blast was never onerous and I never once felt any turbulence disturb my Shoei ensconsed bonce. Even with that 847 cc triple turning 8200 rpm in top gear for an indicated 205 km/h.

The seat felt good until I was getting towards the end of a 600 kilometre first day, only then did I start moving about a little to ease the burden on the buns and upper thighs. All up I covered almost 1000 km on the Niken.

A GT version is expected next year and will offer more sumptuous seating arrangements along with standard panniers and other changes to improve the Niken’s long-distance touring credentials. The standard Niken does include cruise control.

The mirror-integrated indicators and trick front lights are all LEDs, and a 12-volt accessory port is provided next to the dash. Unfortunately, like virtually every other motorcycle with this feature it is of the regular Hella/DIN/BMW small cigarette lighter style port which, unless you buy all manner of adaptors, is pretty damn useless. Just give us a simple USB port or two FFS.

Unfortunately I did not take note of economy figures, and I would suggest that our strops would not have been all that indicative of what one would experience on a normal Sunday ride or multi-day epic. The aluminium fuel tank holds 18-litres, so you would expect a normal touring range of around 300 km.

The Niken is available now, but only from specialist Yamaha dealers that have undertaken servicing training on the unique beast. These dealers are also required to tool up for front end alignments and minor greases that are recommended every third service. A full re-pack with new grease is required every 50,000 km. Otherwise routine servicing is as per normal and recommended every 6000 km.

Yamaha’s initial shipment of 50 Nikens have now hit our shores, and are priced at $21,999 plus on road costs.

If you take one home, prepare to be the centre of attention when ever you hit the road, people will even come up and want to have their photo taken with it.

Oh, and order the optional Akrapovic full titanium exhaust system to liberate that triple chord symphony, it is just cruel not to. Yamaha dealers are getting their demonstrators ready to roll now, get down there and try one out for yourself. 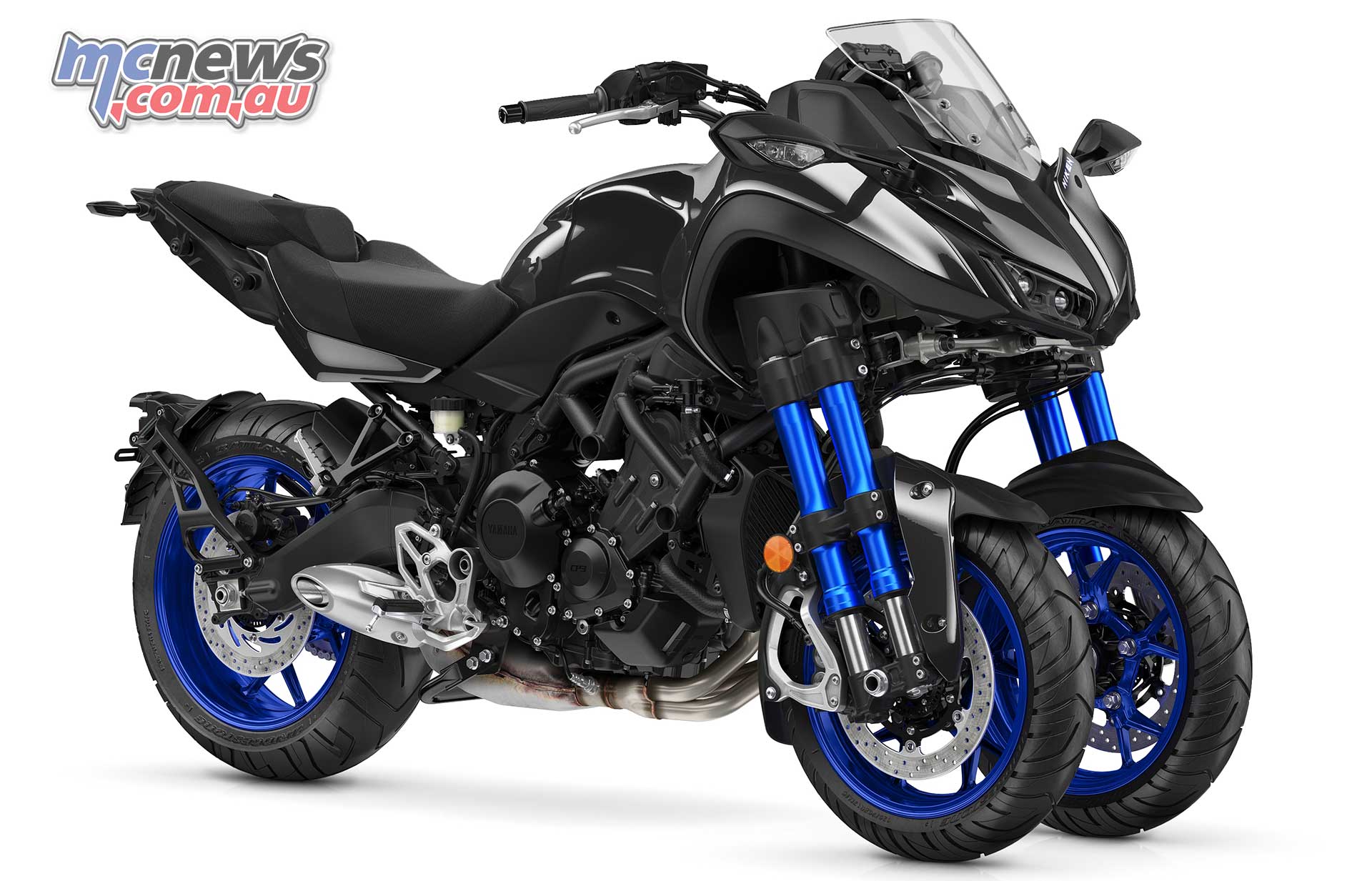