Mike Jones and YRT an unbeatable combination at QLD Raceway

by Motorcycle News
in ASBK, Yamaha News
A A
Share on FacebookShare on TwitterShare

Mike Jones took pole position and both race wins at Queensland Raceway last weekend for a perfect haul of 51-points that propels him to a 16 point lead in the championship after two rounds of what is expected to be an eight-round Mi-Bike Motorcycle Insurance Australian Superbike Championship in 2022.

Jones posted the fastest lap times in all three practice sessions and then took that momentum into the qualifying session to post a blistering 67.67-second lap to take his first pole position for the year.

Sunday dawned under clear blue skies and light breezes to provide the perfect platform for a days’ racing. Jones rolled his machine into P1 on the grid for race one and was determined to make the most of his brilliant start to the weekend.

Jones and Bryan Staring traded positions in a tough opening exchange for the lead in race one, before the YRT rider then took the upper hand, made his move, and took control of the race. Staring fell just prior to the halfway stage and left Jones with a comfortable buffer over the rest of the pack. Jones put his head down and rode flawlessly to the finish of the 16-lap race to take a popular victory in front of his hometown crowd.

With the job not completed, the same focus, energy and determination was needed in race two and Jones delivered. He charged to the lead as the field entered turn two and never let up. His opening laps of race two were poetry in motion as he moved to a three-second lead in the early stages which allowed him to open-up the track and ride his own race. He flashed across the line with a handy four-second margin over second place to take the double victory and move to the top of the championship points.

“That one felt good,” said an almost relieved Jones. “It’s been a long time since I won a race, 2019 was the last time I did, so it’s a great feeling to get back up here again and reward myself and the hard-working Yamaha Racing Team for all their hard work. It’s even better that I was able to do it here in Queensland with a lot of my family and friends here to cheer me on. It makes it more special.

“Both races went like clockwork for me, and the bike was awesome all weekend. I enjoyed the battle with Bryan in race one and it’s a shame he went down but race two I just wanted to get it done so I put in a sprint right from the start to get some clear track.

“Thank you to John and Kevin at YRT as well as the guys on my side of the garage. They did an awesome job and we have formed a great working relationship. Also, thanks to everyone for coming out and cheering me on, it was cool to see so many familiar faces at the event and their support and encouragement helped me.

“We will take a moment to celebrate the win and then its back to work and keep the momentum going for round three at Wakefield Park. Its not that far away so it’s important we keep our heads down as there are too many quality riders and teams in this field to stop trying to improve,” Jones ended.

It was an up and down weekend for team-mate Cru Halliday who finished the round outside the top 10 with 5-DNF results from the two races contested. Halliday was right in the thick of the action during practice and qualifying continually posted lap times inside the top three before finishing up fourth in qualifying, with a lap time just a few tenths of a second from pole.

Race one saw Halliday struggle off the grid and he slipped back a few positions on the opening lap as he tried to control the damage. As the race settled, he was able to get into his rhythm and begin to move forward again. At the end of 16 laps, he finished in fifth place and at the end of a tight freight train of riders covering second through fifth, despite suffering arm pump later in the race.

Determined for a better finish in race two, Halliday jumped much better from the grid but lost some positions as the field charged through the opening lap. Like race one, he began to claw his way towards the front, only his charge was altered when his bike came to a stop in the middle of the track.

A quick assessment at the track shows the battery or the alternator may have been the issue, but the team will work diligently to ensure the issue is rectified and things are ready to go at Wakefield Park.

“It was a frustrating weekend for me but it has just left me more determined to come back to Wakefield and redeem myself. I rode a bit tight in race one and as a result got some arm pump and then in race two, it was no one’s fault regarding the mechanical issue and I’m sure the team will be on top of it.

“My focus now is to just win races. Time to forget about the championship and just concentrate trying to claw back some momentum and win some races. Mike today proved the bike is good enough and the team are doing an awesome job. We still have plenty of rounds left and it’s time to go all in,” Halliday says with determination. 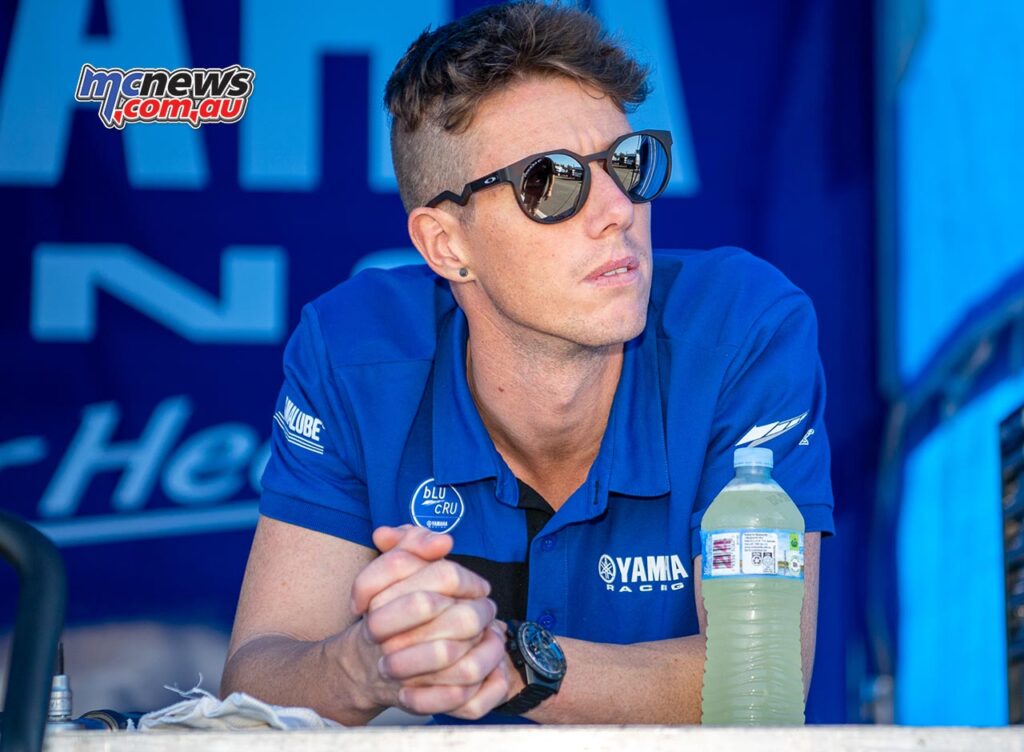 Round three roars to life on April 23-24 at Wakefield Park in Goulburn.