On paper BMW’s new G 450 X is competitive across the three most obvious measures of comparison in the 450cc enduro class; power, weight and price.

After a full day out on the trails I am pleased to report that the G 450 X delivers the goods as promised.

The engine pulls cleanly from low rpm and has no discernible steps in the power delivery right through to its peak power at 9000rpm. Power then tails off cleanly with a huge amount of over-rev available before the limiter intervenes.

The 450cc single proved reluctant to stall when lugging from low rpm over obstacles and enables the rider to feel for every last skerrick of grip in slippery conditions without worrying about the engine cutting out prematurely.

BMW claim that the G 450 X derives its remarkable ability to hook up and drive stems from the revolutionary rear suspension design.

The swingarm on the G 450 X pivots through a hollow gearbox output shaft which eliminates changes in chain length throughout the entire stroke of the rear suspension.

To this rider however it simply felt as though a heavier crank mass combined with flawless throttle response is what furnishes the G 450 X with its amazing tractability.

BMW has fitted the clutch directly to the end of the reverse-rotating crankshaft and I believe that extra mass added to the crank, plus an intermediary shaft and balance shaft help combine with the precise metering of the fuel injection system to provide the engine with unmatched tractability in the 450cc class.

That tractability is aided by a clutch that is also without peer. I can’t comment on the durability of the clutch after only a single day in the saddle but I can certainly tell you that it is beautifully progressive with great feel at the lever.

On a long, steep and extremely muddy climb I got cross rutted, hesitated and lost all drive. Normally such a precarious position would require a long and careful roll back to the bottom before attempting the slippery hill again with fresh momentum. Thanks to the smooth low rpm delivery of the G 450 X and brilliant clutch I actually managed to complete the rest of the ascent without having to start again from scratch. Much to my relief. 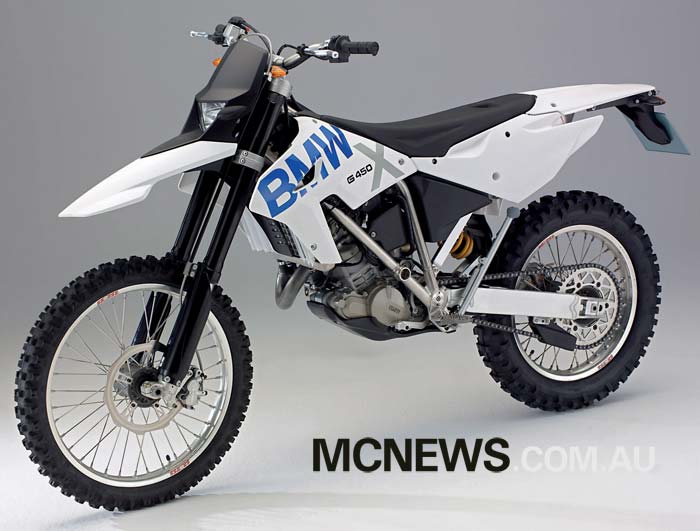 Getting a little more technical….

The 30-degree forward tilt of the cylinder opens up a lot of space for very straight inlet tracts and a dual throttle valve system to help meet Euro III emission regulations.

The starter motor is situated at the front of the engine and the battery is located directly behind the steering head in the upper triangular frame.

A wet sump lubrication system utilises both a pressure and a suction pump to circulate 1.15 litres of 10W-40 oil throughout both the gearbox and engine. The two integrated oil sieves and filters are easily accessible and a sight glass allows for easy oil level checks.

The engine runs a 12:1 compression ratio and the electric starting system incorporates an auto decompressor. A single radiator is fan assisted and looks to be quite well protected.

The exhaust system is stainless steel and the muffler incorporates a catalytic convertor to meet Euro III emission regulations with an oxygen sensor providing feedback to the electronic fuel injection system.

The G 450 X goes about its business with ruthless Germanic efficiency and as a result is an extremely easy to live with mount. A side effect of all that user friendliness is that the BMW does lack some of the excitement factor provided by the 450cc class stalwarts. If you are out for adrenalin thrills and enjoy big hits in an engines power delivery then that may be a negative. But for long days on the trail the positives of the BMW clearly outweigh that small criticism. I would also hazard a guess that due to its friendly manners most riders would actually prove quicker on the BMW anyway.

While the underseat fuel cell is a modest eight litres, across the seven riders on the launch, including a couple of well proven racers, the average tank range was calculated at 112.8km. Still, for any serious adventuring a long range tank would be on order. And for anyone really looking to spend plenty of seat time on the BMW some seriously good underwear or cycling shorts may also come in handy as the seat does bring on a case of monkey butt quick smart. The fuel tank is filled through a portal in the rear of the seat.

A conventional front suspension system consists of 45mm inverted Marzocchi forks with 300mm spring travel. A slanted progressive Ohlins shock absorber offers 320mm of travel and is fixed directly to the swingarm. The suspension and chassis feels more European that Japanese, unsurprisingly, but treads a fine middle ground between all out sporting potential and comfortable trail manners to make for a composed mount in most situations. The front end can deflect a little however and hard chargers might want to tweak the valving in order to get the best out of the machine.

Brembo provides the braking hardware with a twin-piston floating caliper and 260mm rotor at the front combining with a 220mm disc at the rear. Both caused me no complaint.

The front rim is 21 inches in diameter and the rear 18 inches. An integrated reinforced plastic bash-plate is standard as are the Magura bars.

BMW include 13 and 14 tooth sprockets as spares, enabling the rider to shorten the final drive gearing from the standard 15/48 combination fitted as standard.

Due to the position of the countershaft sprocket however changing that gearing might be a little beyond that of the average amateur spannerman. The swingarm must be removed to change the front sprocket due however BMW claim that swingarm removal on the G 450 X is a much simpler task than comparable machines and that a competent mechanic can complete the job in 15 minutes. Good luck with that one…

Because of the elimination of wheelbase change through the stroke of the rear suspension BMW also claim that countershaft sprockets will enjoy a longer service life than conventionally driven machines. That is probably true.

The airbox resides where you would expect to find the fuel tank. The air intake snorkel is situated at the height of the steering head to help avoid contaminants and the air filter is a flat square foam element that slides out on a drawer mechanism for easy maintenance. And it is very easy. 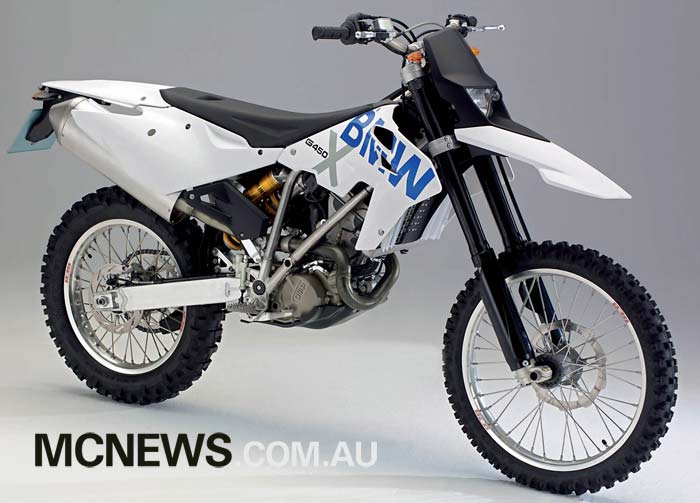 Any new machine in this competitive market is always going to be viewed with scepticism in regards to durability but I must say it appears that BMW has certainly done its homework on the G 450 X.

What impressed me the most was that the BMW is engineered directly for the factory for ADR compliance. No ugly fender extension stuck on as an afterthought, no tacked on indicators and no need for a huge amount of work to unleash the full potential of the engine. No need to rely on a dealer to properly de-restrict your new pride and joy as is the case with all the Japanese offerings in the marketplace. A process in which many dealers fail their customers, thus doing their product extreme injustice in the process.

With BMW’s G 450 X you simply plug in a supplied connector into the wiring loom and full power is available for when you hit the trails. Wonderfully simple, and by far the biggest positive point of difference in BMW’s favour. Particularly for owners who have little mechanical knowledge or the ability to set a machine up properly for themselves.

As a result, when judged against the established class peerage as they come out of the crate, the BMW G450X is the most well thought out approach to modern four-stroke performance on the trails. And for that BMW are to be applauded.

BMW provide a full two-year warranty on the G 450 X providing the mandatory service regimen is met. Again, that is another positive point of difference in favour of the BMW. Oil changes are required every ten hours and piston changes are recommended every 70 hours. While that may sound over the top, it is comparable to most of the hard core 450cc enduro opposition and better than some.

If you want the chance to sample the G450X while brushing up on your dirtbike skills then BMW offer specific training courses to help develop better off-road riding techniques. The two-day courses are practical workshops with expert tutors on hand to demonstrate correct techniques which students then practice in a controlled environment. Courses are held in NSW, Queensland and Victoria. At $895 (inclusive of G 450 X hire) the courses are not cheap, but what better way to evaluate whether you and the G 450 X are a marriage made in heaven?

Also BMW recently announced a come and try day at Dargle on June 21 where participants can also try a G 450 X Enduro on for size in its natural environment. You will have to get in quick with an email to info@bmwmotorrad.com.au with your name, address, current motorcycle, contact number and email address in order to score yourself an invite to the ride. Numbers are limited, first in best dressed.