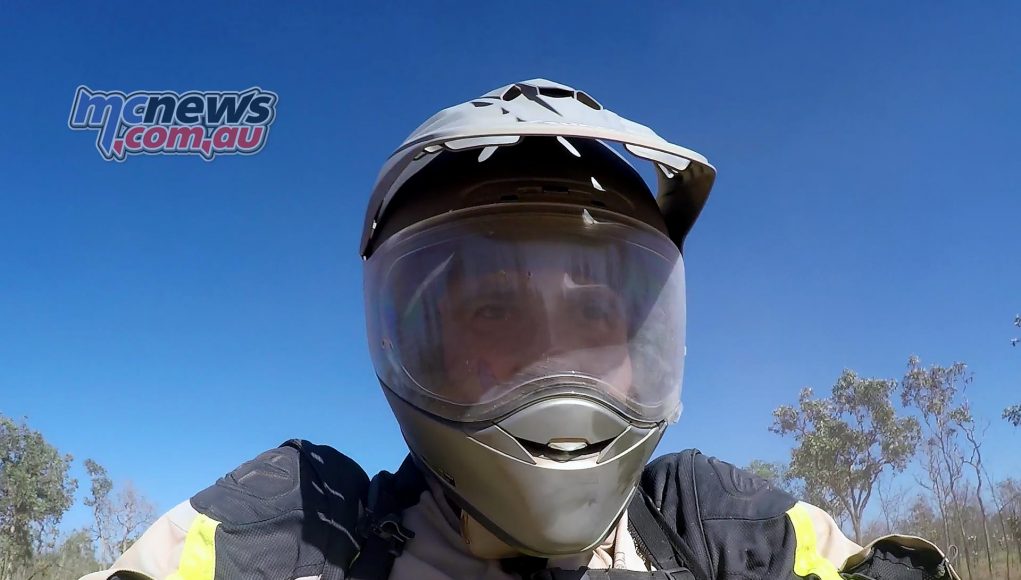 Wednesday saw me parachute into the second half of the 2017 BMW GS Safari Enduro, joining the crew at Cape York and then riding south to Coen on the R 1200 GS Rallye X.  I detailed that first part of the story here (Link), while today I cover day two of the adventure. There are many more days to come, as I ride from the northernmost point of Australia to the southernmost point of the mainland, Wilsons Promontory. Read on for more…

After my baptism of fire with a sand run on worn out tyres serving as my day one indoctrination (Link). I was feeling good this morning as I left Coen, the Rallye X had been treated to a new rear hoop overnight and was poised ready for action. It was on!

Some early morning work on the computer had meant that I was one of the last of the 140-strong contingent of riders to exit Coen and start making headway towards Lakefield National Park.

It was quickly into fast dirt sections, most of it quite unthreatening apart from pockets of bulldust every now and then to keep you on your toes, along with some floodways.

About half an hour into proceedings there was one deep floodway washout that was particularly gnarly as the bottom of it was lined with sharp and jagged rocks. I hit it pretty hard as it came up quick but got out with any damage, some other riders were not quite so lucky.  Not far out the other side we saw a couple of riders stopped with some serious rim damage. There was a bit of rim damage amongst the group from this washout, some of the spoked rims were damaged but one of the riders with alloy rims had his front open up like a tin can.

After stopping for fuel at Musgrave I dialled things up a notch and started getting a bit stuck in as we forded Lakefield National Park. The tracks were mainly open, with some sandy sections and plenty of dust, but I had started to get back in the GS groove and was feeling comfortable.

The Rallye X felt great at $1.60, better than it did at the metric ton in fact, it floated better across the soft stuff. Shifting my weight rearwards on the bike and extending the length of my body along the bike made things better again. Gripping the bike between my knees relatively tightly, but keeping a light and neutral touch on the bars, unless some serious counter-steering was needed.

I made great time on Battlecamp Road through to the Old Laura homestead. The dust from oncoming 4WD vehicles, and when passing riders, certainly had its challenges but I was in the groove and nothing phased me. The Rallye X and I had bonded.

A wake up call came a bit before Isabella Falls. The instruments were coated in a thick layer of dust, and as it was an organised event I guess I was somewhat in a brain-off mode when it came to organisation, and had not even considered any logistical concerns. But with more than 80km still to go the low fuel light illuminated, and I noticed that the trip computer now gauged the fuel remaining in the 20-litre tank would only get me another 40km at my previous rate of progress.

Thus the throttle needed to be wound back, a flowing and conservative riding style adopted, and hope for the best. The range stopped counting down quickly, it didn’t start going up, but the rate of countdown stalled somewhat. Some reassurance but I was not out of the woods. The chase vehicles would be hours behind, and I certainly didn’t fancy sitting in the hot sun by the side of the road alongside a flaccid Rallye X.

I had started to notice a rider closing in on my mirrors, I slowed further and gesticulated for him to come alongside, where I indicated for him to go ahead, my thinking, of course, was to tuck in behind him and get an aerodynamic tow towards our destination of Cooktown. Luckily there was a caravan park 20km from cooktown that had juice, the day was saved and I could get back on the throttle for today’s destination, Cooktown.

A vast swimming pool awaited me, and $10 cocktails. Winning!

The third and final day of GS Safari Enduro will see the group head further south towards Cairns with a morning stop at the famous Lions Den Hotel, then Bloomfield Track and into Daintree National Park, before a wind up shindig at Palm Cove. Cairns will not be the end of the trip for me though! I will continue working my way south to complete a tip to tip adventure, from Cape York to Wilson Promontory. Stay tuned for more updates throughout the trip.