by Trev
in BMW News, Motorcycle News, Touring
A A
Share on FacebookShare on TwitterShare

This morning I got away from Charters Towers around 0730 and headed south with a first stop around 200km in at Belyando. Here I met up with a couple of weary travellers that had also been to Cape York and were now not far from their homes at Clermont.

They were both on the default budget adventure option, Suzuki’s venerable DR650, complete with aftermarket accessories such as the big Safari fuel tank, sheepskins to help their bums cope with the DR’s seat, and a good soft luggage set-up. You can achieve this sort of set-up, complete with the new price of a DR650 figured in, for around 10k.

That’s why despite this model being essentially unchanged since its last major update in 1997, Suzuki still sell shitloads of them. Compare this to the almost 30k ride away ticket price of the R 1200 GS Rallye X, and here you have two opposite ends of the adventure touring spectrum.

I know the DR650 very well. I have owned a couple of them, crossed Australia on them, ridden Natural Terrain MX rounds on one, and even took one to the drags for a laugh many moons ago and recorded a 14.6 second quarter mile. I also have no interest in going back to one. Not now big-bore adventure bikes have got so good and offer such incredible performance in every area.

The GS feels 20 years newer, and it also feels 20k more expensive. With almost four times as much horsepower and three times as much torque, of course the BMW drivetrain is world’s apart from the relatively simple Suzuki. The BMW also has every electronic gizmo imaginable, from the latest generation lean angle sensitive ABS and sophisticated switchable traction control, to a two-way quickshifter.

For many, it is the sheer simplicity of the DR650 that is one of its primary drawcards. A single-cylinder engine breathing through an old school carburettor and terminating in chain drive, the whole set-up is very much tried and tested. On my first DR650 I covered 54,000km in 15 months and never had any real problems.  Of course the primary advantage the DR650 has over the big GS, price notwithstanding, is the fact that it tips the scales almost 100kg lighter than the burger with the lot BMW. 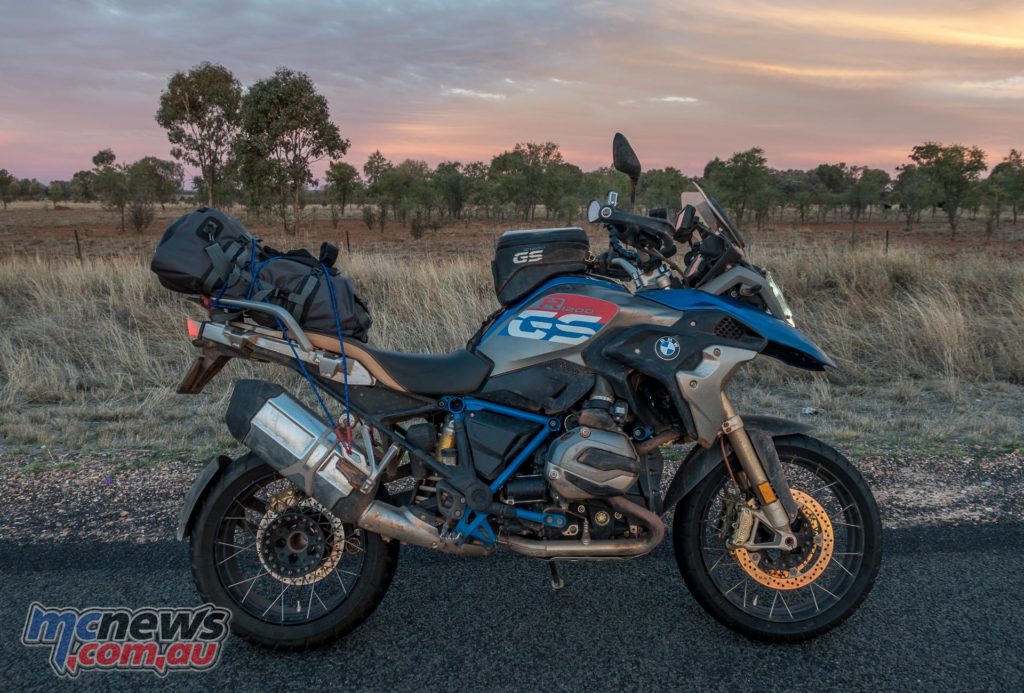 Still, unless I was heading for lots and lots of truly gnarly single track, or the endless deep sand sections of the Simpson Desert or Canning Stock Route, the BMW wins out for me every time, as you would expect, and indeed hope, when comparing the price points these machines are aimed at. As I parked them next to each other this morning though I thought it might be worth touching on the comparisons of two bikes that present the two extremes of adventure-touring motorcycles.

After Belyando I continued south towards through Clermont, Springsure and Rollaston. Was stopped for a licence check and breath test at Injune, then it was Roma and Surat before rolling into Saint George just after 6pm.

Another subject I will touch on today is wildlife. I had forgotten just how bad it was through these inland parts of southern Queensland, and no doubt the first few hours tomorrow as I head into inland New South Wales will, going on previous experiences, prove just as bad. 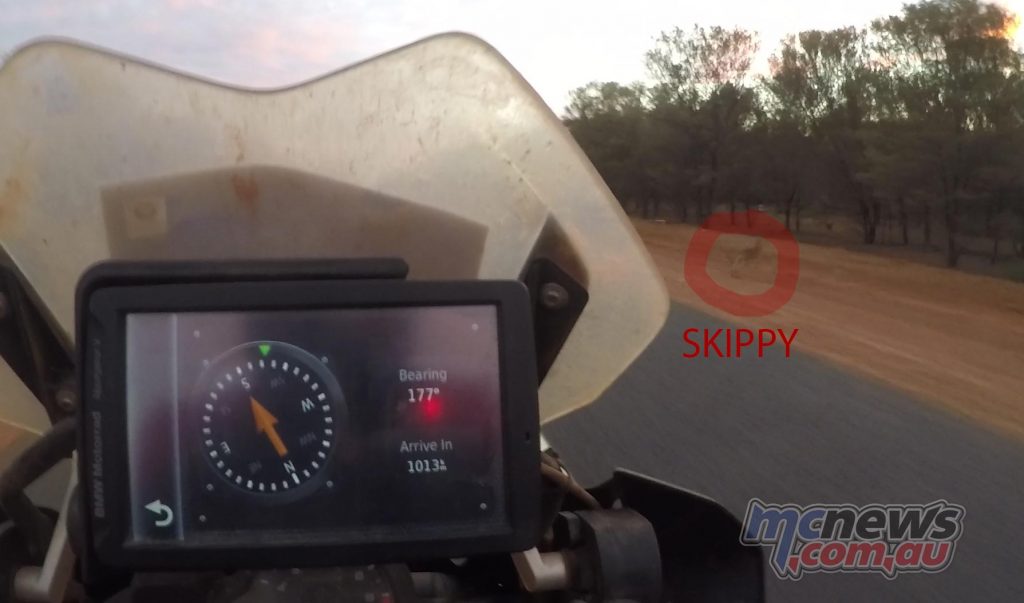 Today, particularly after 4pm was an exercise in extreme hypervigilance and caution. Hardly 15 minutes went by without me having to take some sort of avoidance action to ensure my safety. Predictably, kangaroos were the main problem but there were also wild pigs, wild horses and more than a few emus to dodge along the way.

There was so much road kill my nasal passages rarely got much of a break from the stench of dead flesh stewing under the hot sun. The first big splattered pig I came across I stopped to take a photo for the story, but then thought better of it, nobody really wants to look at roadkill. Thus I bring you an image of some majestic brumbies instead. 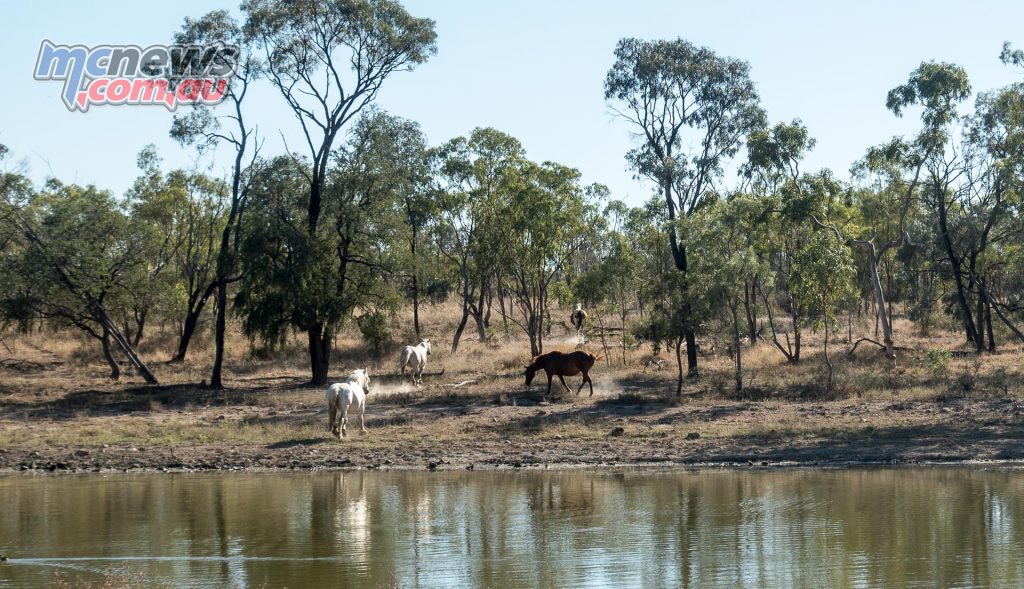 My eyes are now quite sore from the strain of looking out for suicidal marsupials, but the body is still relatively fresh after 1100km in the saddle. The GS just eats up the miles so well while cosseting the rider like few other machines. Let alone a motorcycle that is so capable in so many scenarios, both on and off the road. 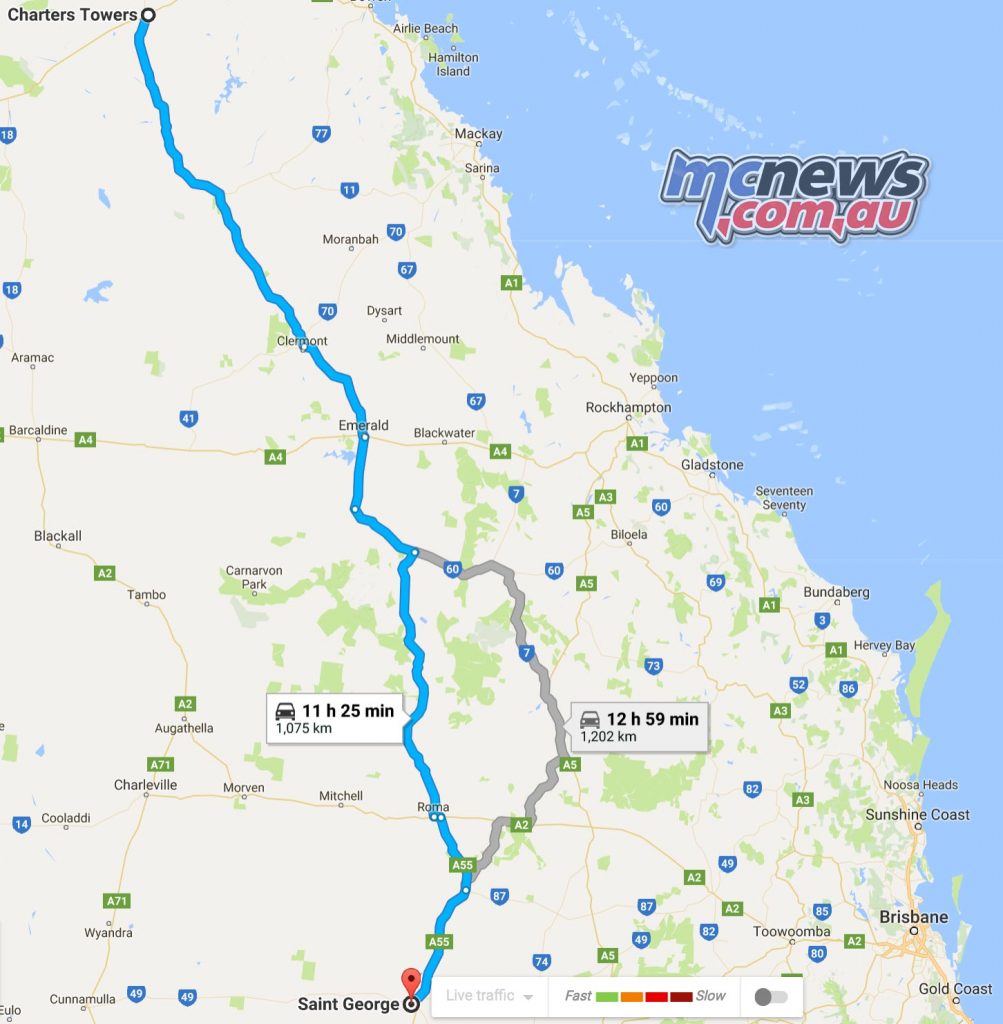 Today did highlight one thing though that I think could definitely improve the GS experience, and it is one I have mentioned before when reviewing the model. Sixth gear could do with being much more of an overdrive, there is only 500rpm difference between fifth and sixth gear at 110km/h, 4000rpm in sixth, or 4500rpm in fifth. A sixth gear that lowers those 110km/h revs down to around 3500rpm or below would certainly be an asset, and also improve fuel consumption.

While cruising at 100km/h the GS can easily record 5 litres per 100km or better, but up that by 20km/h and fuel economy gets 20 per cent worse. Dropping those rpm a little in sixth should improve that highway economy and in turn extend further the open road touring range of the GS.

Anyway, that’s enough for me as MotoGP has just started. Tomorrow will see me wend my way further south towards Canberra before heading further towards Wilson Promontory, which on current projections I should reach some time on Tuesday. 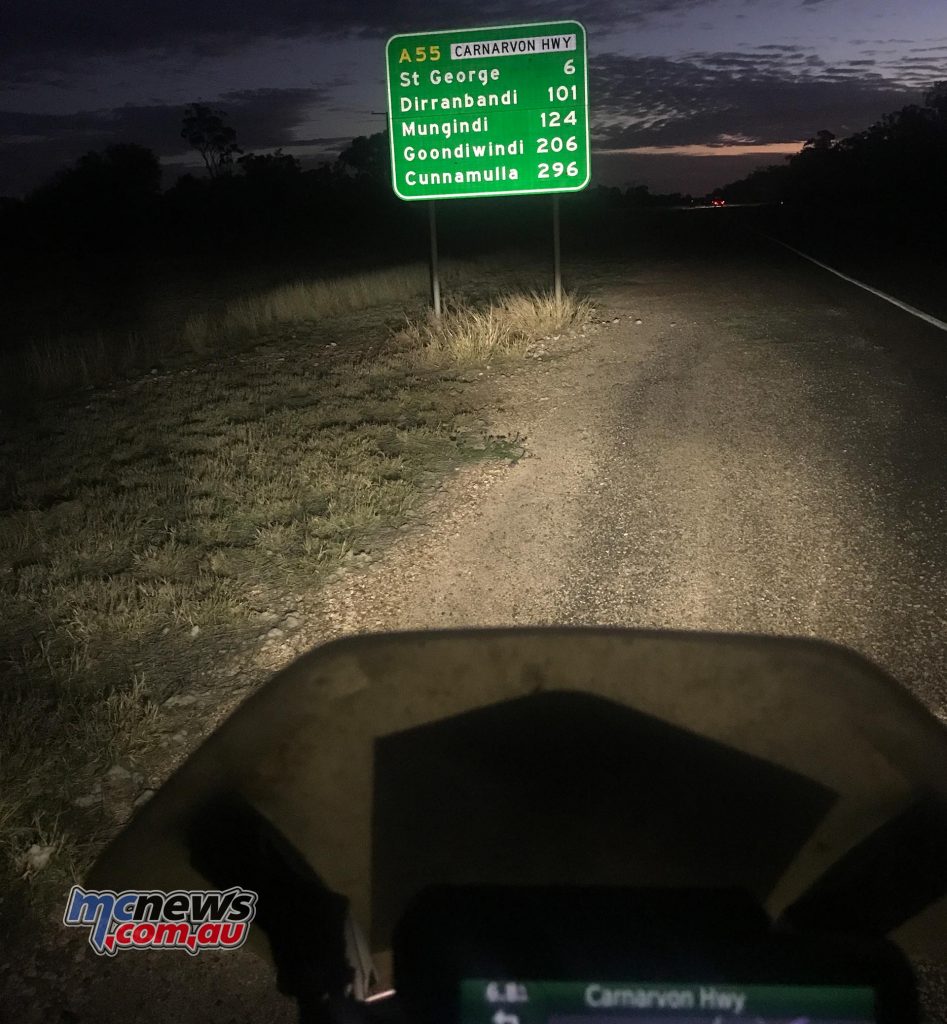