by Barry Russell
in Japan / Asian Road Racing, Motorcycle News, Motorcycle Racing
A A
Share on FacebookShare on TwitterShare

There was a clear shift in the balance of power between Indonesia and Thailand in Asia Production 250cc Qualifying this afternoon at The Bend Motorsport Park, as Rheza Danica Ahrens led an Indonesian 1-2-3 to lock out the front row for Race 1 on Saturday.

Rheza put in an early killer lap of 2:08.039, and sat atop the timing sheets as the rest of the pack fought it out for the remaining places at the front.

Astra Honda’s ‘Super’ Mario Surio Aji was the best of the rest, grabbing second place more than half a second behind and with a margin of 0.212 to Ahwin Sanjaya, who completes the front row.

Anuparb began to get among the leaders in the middle of the session, but, in the end could only get within a second of Rheza. The next best Honda rider was Muklada Sarapuech, who qualified ninth with a best lap of 2:09602 after a crash late in the session at the final turn spoiled her chances of getting onto the front row. She is behind two more Indonesians, Andy Fadly and Anggi Setiawan.

Of the other fancied riders, Yamaha Indonesia’s Richard Taroreh qualified 13th, to complete the list of riders capable of making up the leading group when racing starts.

Lone Australian wildcard, Zac Levy, who qualified 24th, commented, “We are quite disappointed with where we qualified, as we can’t even match the pace of the Aussie bike at the moment. We are finding the motor isn’t up to the scratch of the Factory Yamaha and Honda bikes, which is making it hard as we can’t match the times we are getting in the 300 class. We will keep plugging away and see what we can come up with.” 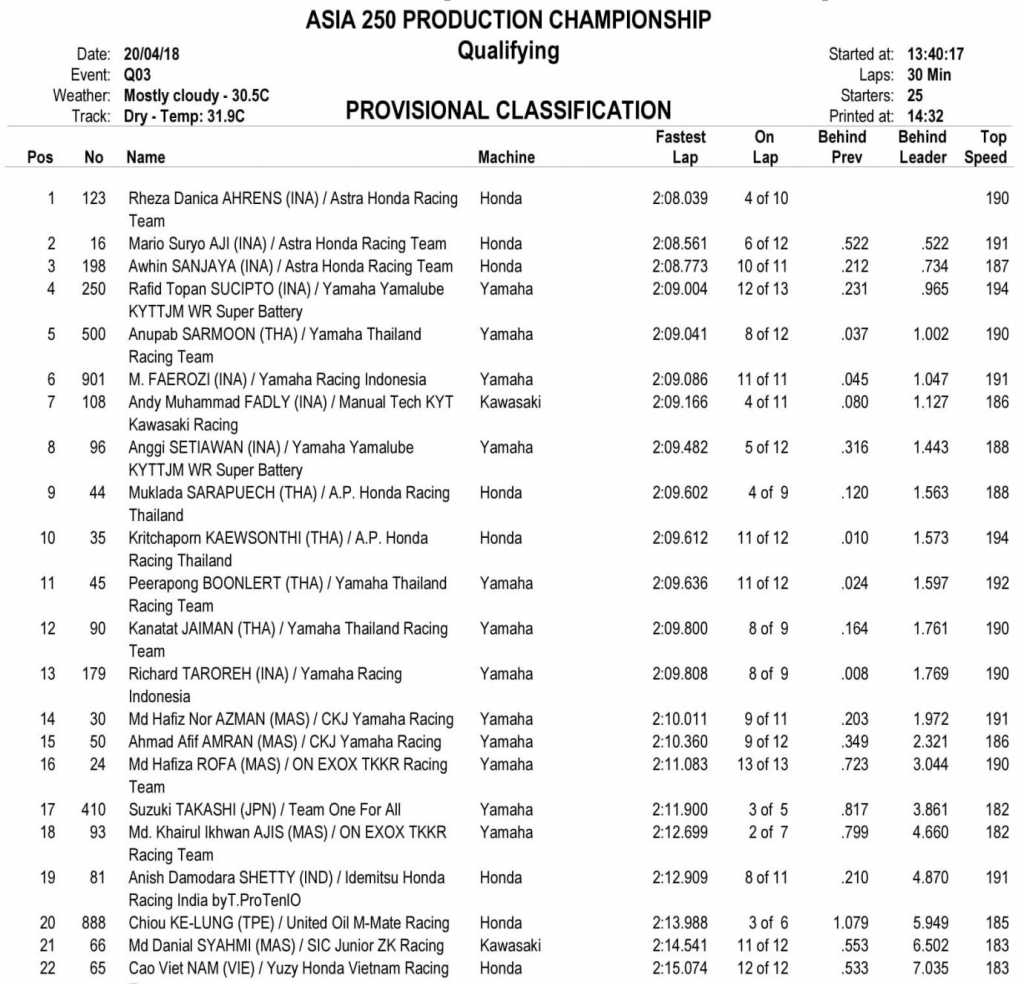 As the Asia Road Racing Championship’s Underbone pack got to grips with the curves, cambers and undulations of The Bend Motorsport Park during morning Qualifying, Wahyu Aji Trilaksana asserted his authority by recording a fastest time of 2:18.954, a full 1.2 seconds quicker than Izzat Zaidi. The impressive wildcard, Travis Hall, was third fastest.

Asia Road Racing wrap from round two at Sepang

Wahyu Aji, the 2016 champion, is seeking redemption at The Bend after being hit with 21-points worth of penalties during Round One in Thailand last month.

The top 15 Underbone riders in the ARRC go through to Superpole. This determines final grid positions according to times achieved on a single lap without the benefit of slipstreaming, the riders set off at 20-second intervals in three groups of five.

SCK Rapido Hi Rev Honda’s Helmi Azman qualified sixth, so went out at the back of the middle group. The 19-year-old Malaysian hit a close to perfect lap of 2:18.857, good enough to win Superpole and secure pole position.

Wahyu Aji was four-tenths slower on his single lap, which was good enough for second, in front of UMA Racing’s Haziq Fairues.

13-year-old Travis Hall will start from the third row, showing that he is more than capable of running with Asia’s fastest Underbone riders, therefore guaranteeing himself a wild weekend in Tailem Bend.

Locky Taylor, after struggling with an uncompetitive machine, brought a disappointing Underbone adventure to a close. He will be focusing his attention on the Yamaha Motor Finance Australian Superbike presented by Motul Pirelli (ASBK) Australian Supersport 300 class. 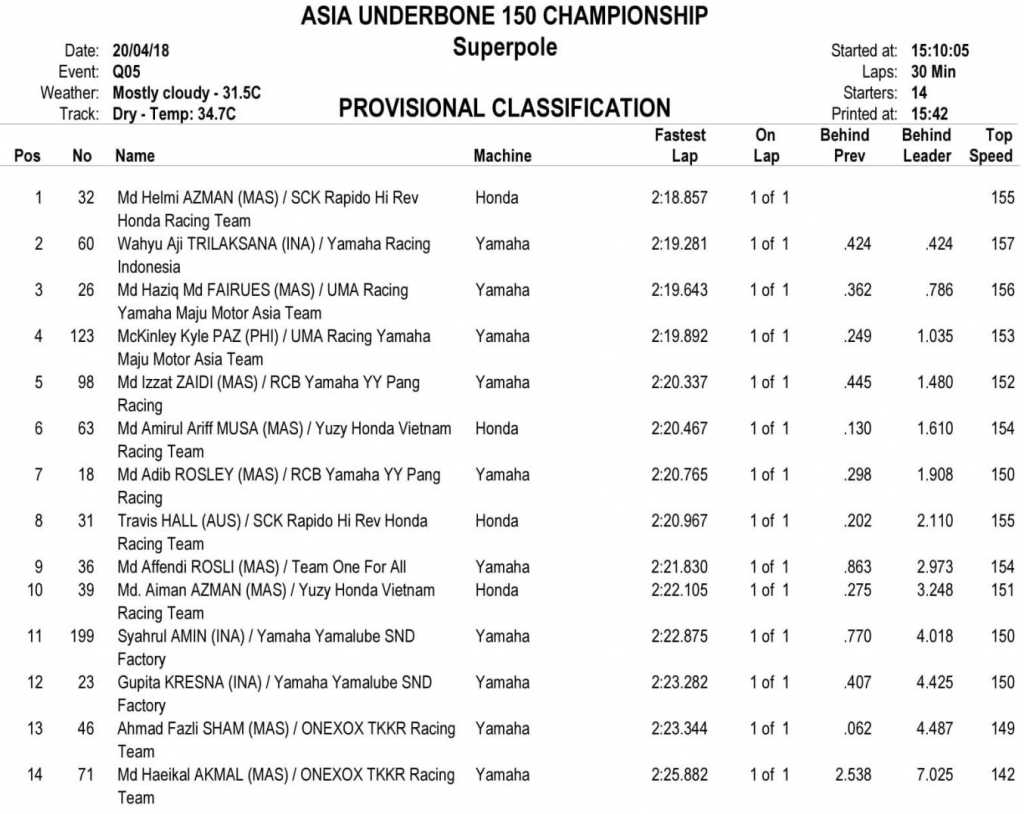 Team Yamaha Racing Asean’s Yuki Ito consolidated his reputation as a fast learner of new circuits by taking pole position at The Bend Motorsport Park this afternoon. The Japanese rider logged a best lap of 1:56.591 halfway through the 40-minute session.

The time looked unassailable until Britain’s Joe Francis went out on the WeBike IKAZUCHI Yamaha on fresh tyres after 30-minutes and flew round the 4.9km circuit within a tenth of Ito.

Idemitsu Honda’s Taiga Hada got within a tenth of Anthony West’s understudy with two-minutes remaining and will complete the Supersport front row.

Hong Leong Yamaha’s Kasma Daniel Kasmayudin showed his potential with a lap of 1:56.736 to qualify fourth ahead of former GP125 star Tomoyoshi Koyama. The Japanese rider lapped consistently in the 1:57s, edging a hard charging Decha Kraisart to the outside of the second row by three-hundredths of a second.

Defending champion, Azlan Shah Kamaruzaman was in and out of the pits throughout the session, managing a best time of 1:57.509, which means he will start from the middle of the fourth row. The Malaysian needs 13-points to catch the absent Anthony West at the top of the title ladder, but has left himself plenty of work to do over the weekend.

Broc Pearson was the best of the wildcards, qualifying 16th, nine-tenths faster than Tom Toparis who will start next to him on the sixth row. Scott Nicholson, on the sole Suzuki, will start from 22nd place.

“It was a difficult qualifying session today after how well we went yesterday. The team is having a big weekend trying to do both classes on one bike and it is becoming a bit of a struggle. The setup we had going into qualifying wasn’t what we were after, but we will make some changes overnight, but I am confident we can run in the 58s or 57s, which will see us inside that top 10 if all goes well.”

“We went out to try and fix our front chatter. It doesn’t matter what we have tried so far, we just haven’t found a way yet. As a team we have tried three different bikes but no luck. Today has been one of the hardest days we have had, but we will keep pushing and see what we can come up with before tomorrow.”

“Unfortunately we struggled to find a better setup with the tyres in qualifying. Of course it was tough but we’re fighting hard and I ended up getting my fastest lap of the weekend. Decently happy with that but I would have liked to have been much further up the grid.” 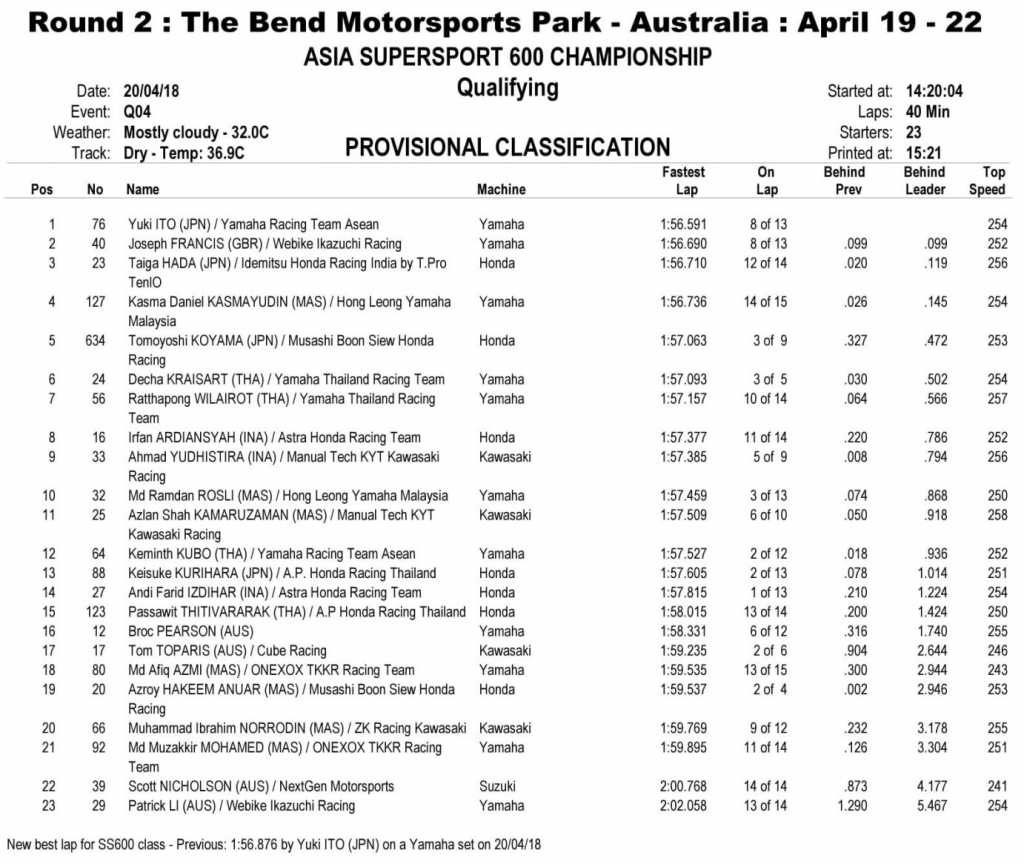 Barry Russell is a motorcycle journalist and a frequent FIM Steward for the Asia Road Racing Championship.