Sports-Touring with a mental case

Ever since the 1290 Super Duke GT was officially confirmed by KTM last year I have been champing at the bit to throw a leg over what essentially is KTM’s long awaited replacement for the rambunctious 990 SMT.

Of course that’s not KTM’s corporate line for this model, the Austrians draw no lineage connection with the SMT, but as an ex 990 SMT owner it is clear to me that the new 1290 Super Duke GT is the logical replacement for the SMT.

The 990 SMT was a fantastic ride, full of laugh in your helmet moments as you picked the comfortable v-twin supermoto styled sports-touring machine up on to the back wheel from the apex of any turn. It was also flawed, the most problematic being the patchy fuel injection giving it a crude character below 4000rpm. However, anybody that spent any significant time on an SMT quickly forgot any such niggles, the fun factor so epic that any faults were quickly forgotten, the 990 SMT was truly one of the most entertaining motorcycles ever made.

With the introduction of the 1190 Adventure a couple of years ago KTM went from having patchy fuelling, average ABS systems and no traction control software to leapfrog the entire motorcycle industry in those areas. A development tie-up with Bosch, where the German company partnered with KTM in the development of their next generation ABS and traction control software, was the smart move that catapulted KTM to the forefront of motorcycle technology. And due to that partnership agreement, KTM had access to those systems for 12 months before they could be purchased by other manufacturers.

Things stepped up another level last year with the introduction of the 1290 Super Adventure with lean-angle sensitive ABS and semi-active suspension. Now, in 2016, the 1290 Super Duke R has morphed a sports-touring sibling, the Super Duke GT. Being the latest machine to roll off the Mattighofen production line it bristles with the latest technology, and surpasses anything yet produced by KTM.

It also is perhaps a lesson in understanding just how aggressive and serious KTM has become as they forge their way into becoming a more mainstream part of the street bike market. Over 30 years worth of man hours went into the transition from Super Duke R to GT. The fine detail of the project, from the design stage, to the execution of the finished product, to the development of the accessories range that effectively rounds out the package for the more touring oriented section of the market, is a clear demonstration of why KTM has been growing so strongly in recent years. The Austrian brand is the biggest European motorcycle manufacturer, well clear of both Ducati and Triumph.

The 1290 Super Duke R has plenty of crazy about it, that’s also a KTM trait, it’s why I, and many others, have developed an almost unhealthy love for the 75-degree LC8 v-twin.

The GT boasts more low and mid-range torque than the 1290 Super Duke R. At the opposite end of the spectrum, peak power is the same number as the Super Duke and achieved at the same 9500rpm on the tachometer. That generally goes against the grain when tuning an engine for more touring purposes, but sticks with the KTM design criteria of always needing to maintain a fair bit of mental in the package.

I can’t overstate just how fast this motorcycle is. Sure, 173hp is not an unusually high number in this day and age. But that horsepower combined with the immense torque that a highly tuned 1301cc of v-twin delivers throughout the lower and middle rev range, provides a whole new experience. Peak torque of 144Nm is achieved at 6750rpm but there is so much torque everywhere that the 1290 Super Duke GT feels gobsmackingly fast no matter what RPM the conventional tachometer is registering. KTM claim that by 3250rpm 114Nm of torque is already available. I don’t doubt it. Continue… 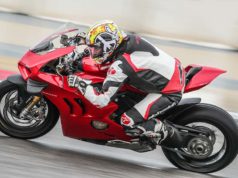 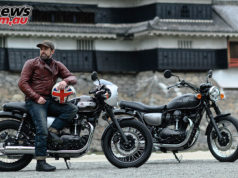 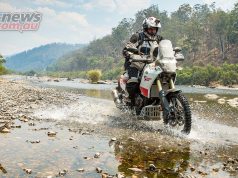