WorldSBK 2018 is Go! All you need to know right here

For the first time ever, fans who purchase a three-day ticket will be granted access into the paddock for free, which enables them to gain behind the scenes access to their favourite Superbike stars.

The world famous Paddock Show will once again be a main attraction throughout the Yamaha Finance Australian Round, and is set to be bigger and better than ever before. With opening day show’s, meet and greets, team manager chat shows and the ever popular SuperShow you won’t want to miss the on-stage action once bikes are back in their boxes.

On top of this, all new for 2018 will be the Party in the Paddock on Saturday night, and the all exclusive parc ferme in the paddock. Minutes after the chequered flags are waved, the podium finishing machines will ride through the paddock and celebrate with their teams at the all new Parc Ferme next to the paddock show, bringing in even more access to the fans.

Not only will access to the paddock be free with a three day ticket, but there will also be the Super Zone located next to the Gardner Straight. Offering fun for the whole family, it will keep everyone entertained when bikes aren’t on track. Inflatable slides, planes and much more will all be on offer for free.

Another way you won’t have to put your hand in your pocket will be to have a test ride with the electric motorbikes, as you begin to experience a new type of exhilarating motorbike. After trialling the future just near the kids super zone, then you can take a look at the past with the WorldSBK Expo. A regular and very popular highlight over the weekend, it is located in the exhibition building alongside the Gardner Straight. Open from 9:00 to 18:00 h Friday, 8:00 to 18:00 h Saturday and 8:00 to 17:00 h Sunday, there will be plenty of time to witness some WorldSBK history. There will also be a special Italian GP motorcycle collection to feast your eyes on, located at the visitor centre.

Embrace your inner child with the new Go Karts, which can be raced around a mini version of the phenomenal Phillip Island Grand Prix Circuit throughout the weekend. On top of this there will be a race simulator to use, which you can trial wearing your new merchandise available to purchase around the circuit. On top of this, get a full taste for the size and scale of the Southern Australian circuit with a special helicopter flight.

Ever popular with fans and riders alike, the Pit Walk will be back for 2018 and with three sessions available it will be hard to miss it. There will only be access only with a Pit Walk Pass, which can be purchased from the Event Information Office locate at the base of the pedestrian overpass on Gardner Straight. See inside the riders garage and secure an autograph from your favourite rider throughout the weekend to start 2018 in style.

Short, fast, sweeping, unpredictable, undulating, breath-taking, 4.4km of pure adrenaline. Phillip Island Grand Prix Circuit is the perfect backdrop for the opening round of the 2018 MOTUL FIM Superbike World Championship, and it’s set to be a season to remember. Everything restarts here, and if previous experience is anything to go by, we will be treated to a weekend of remarkable racing action to keep fans on the edge of their seats.

The man with the target on his back is reigning world champion Jonathan Rea (Kawasaki Racing Team), who has won five out of the last six races around Phillip Island. Already impressing with his pace throughout the two day Official test in Australia, it is difficult to look past Rea as a podium finisher this weekend. Despite suffering from three crashes over the two days, he heads into the first round of the season after working through all of his testing regime and is ready for the battle. British team-mate Tom Sykes (Kawasaki Racing Team) could be the dark horse this year, as he prepares for his ninth season with the Provec squad. Heading into 2018 with a clear mind and determined attitude, he explains he feels stronger than last season, especially following the pre-season tests on the green machine. Never winning around the Australian circuit, Sykes was on pole in 2016 and has only taken three podiums here – but with a strong two days at the Official test it would be hard to rule him out.

Over in the red corner, Chaz Davies (Aruba.it Racing – Ducati) has been spending his winter nursing an injury sustained in the Jerez test back in November. Struggling slightly with the set up of his Panigale R throughout the winter, the newly-wed is hoping to find some magic ahead of the weekend. Finishing on the podium on half of his appearances around the 4.4km circuit, Davies is yet to win despite being involved in some sensational battles – most notably the one to the line last season. Whilst Marco Melandri (Aruba.it Racing – Ducati) had a stronger official test to start the week, and with victorious memories of the circuit from his time in the 125cc and 250cc World Championships, he will no doubt go into the race with a positive outlook. Making his return to the series here last season in which he took a podium finish, he clearly has the pace and a strong mindset should help ahead of the weekend.

With podium finishes to his name in Australia in both WorldSSP and WorldSBK, Michael van der Mark (Pata Yamaha Official WorldSBK Team) has been building a solid pace with his YZF-R1 throughout the two day test, with a good pace the first and final sectors of the track. One of seven circuits he has taken a WorldSBK podium around, he will be hoping to make a big impact for the start of 2018. Whilst Alex Lowes (Pata Yamaha Official WorldSBK Team) is working to continue with the podium pace he acquired last season, and despite being locked in a stunning top three battle in 2017, he is yet to take home a trophy from Australia.

An all new line up welcomes all new challenges for the Red Bull Honda World Superbike Team, as Leon Camier and Jake Gagne prepare to battle on the Fireblade CBR1000RR SP2 machines. Impressing with a strong pre-season pace so far since first swinging his leg over the bike, Camier may not be confident of having the race pace yet, but he is showing positive signs on the machine. Taking a best result of fifth position around the circuit, the British rider will have a challenging weekend ahead, whilst team-mate Gagne will be hoping to make a solid and steady start to his first appearance as a permenant WorldSBK rider.

Returning to the WorldSBK paddock for the first time since 2014, Loris Baz (GULF Althea BMW Racing Team) is ready for a challenging but enjoyable season. Starting to understand the German machine, he had a strong two day test in Australia and will be eager to quickly adjust to the Pirelli tyres and be fighting for some strong positions. Positive memories from 2014 will surely follow the 25 year old, after he secured a podium with Kawasaki, Down Under.

After a difficult two day test, Jordi Torres (MV Agusta Reparto Corse) will be wanting to put the opening day behind him. The Spanish rider crashed at 190kph but bounced back up and will continue to work with his new team as they try to develop the Italian machine. Taking a fourth position here back in 2015, Torres has plenty of experience Down Under to help his adjust to his new bike. 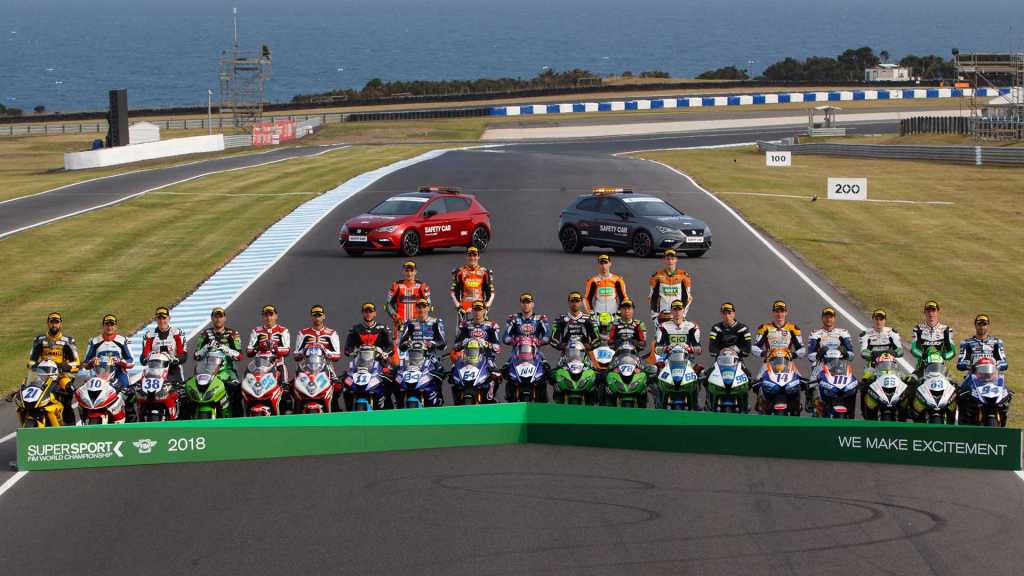 As the FIM Supersport World Championship rolls into the Phillip Island Grand Prix Circuit, the fight for the 2018 title begins and they’ll be some hungry riders wanting to get their hands on the crown. There is no better setting than the picturesque 4.4km track on the South East coast of Australia, and at a track where four riders on the grid have won around, we are set for a barnstormer of an Yamaha Finance Australian opening round.

Reigning world champion Lucas Mahias (GRT Yamaha Official WorldSSP Team) quickly became reacquainted with his Yamaha YZF-R6 after a few days testing, and if his pace in the two day official Phillip Island test is anything to go by, he will be the man to beat. After taking second position here last year, he certainly has a strong pace to contend with. However not far off his tail is team-mate Federico Caricasulo (GRT Yamaha Official WorldSSP Team), who despite struggling with inconsistency last season had a solid two day test, finishing in third overall. In a similar position to Mahias, the Italian took second position here in 2016, proving he has the speed to fight at the front around the fast circuit.

Mahias’ main rival for the championship is Turkish rider Kenan Sofuoglu (Kawasaki Puccetti Racing), who remains in WorldSSP for his 11th full season and will be aiming to take his sixth title, after his hopes came crashing down at Magny-Cours last year. Scoring points here in the WorldSBK race, Sofuoglu has taken three victories and five podium finishes in Australia, and despite coming into some issues recently, he is always the man to beat in WorldSSP.

Anthony West showed great pace during testing earlier this week to be fifth quickest and the fastest Kawasaki. It seems as though Westy might have the package underneath him to score some great results here this weekend.

Flying the flag for Honda this season is the CIA Landlord Insurance Honda squad, who are running with Niki Tuuli and Andrew Irwin for 2018. But disaster struck the team throughout the two day Official test, as Irwin broke his hand on the opening day and the Northern Irish youngster has been forced to pull out of his debut weekend. Tuuli will be running the lone bike for the weekend, and the Finnish rider is continuing to adjust to his new bike and team, but taking a top five finish last season stands him in good stead for 2018.

MV Agusta Reparto Corse by Vamag will be running two bikes this year with Raffaele De Rosa and Ayrton Badovini at the helm. With a wealth of racing experience behind him, Italian De Rosa has raced in Australia before but has failed to impress so far. But with his new Italian team he will be hoping to put up a strong fight Down Under, following a tough end to 2017 in WorldSBK. Joined by Badovini, the team will be hoping to improve and challenge for podium finishes – especially considering the bike won this race last season in a stunning final lap battle.

New riders to the class for 2018 are Randy Krummenacher (BARDHAL Evans Bros. WorldSSP Team) and Sandro Cortese (Kallio Racing), and the duo both impressed throughout the two day Official test. Swiss rider Krummenacher ended the two days on the top of the timing screens with his Yamaha YZF-R6, but this doesn’t come as too much of a surprise as he took the race win here in 2016 on his debut. Whilst Cortese makes his WorldSSP debut this week, and with a strong initial pace and a top five finish overall in testing, it will be interesting to see how the 2013 Moto3 World Champion gets on around the circuit he is so familiar with.

Tech3 splitting away from Yamaha from 2019

Tech3 splitting away from Yamaha from 2019