Five time ISDE winner and 2017 Championnat de France Enduro Champion Jess Gardiner has continued her good form by wrapping up the 2017 FIM Enduro European Championship at the fourth and final round held in Slovakia last weekend.

Thankfully the French Army team were able to lend Gardiner a Yamaha YZ250 and although the bike was unfamiliar to the Aussie star she was able to make the most of the extra 2-stroke power and win the event.

“It was a lot fun out there, in fact, it was probably the most enjoyable races I have had in a while, whilst racing here in Europe. Today has just capped off a perfect season in the European Championship. The round win and the championship is a fantastic way to say thanks to the French Army team and the FFM (Fédération Française de Motocyclisme), as well as Nico from the Ridercamp enduro team for everything they have done for me this weekend, after my bike was stolen. Also a special thanks to Yamaha Motor Australia (YMA) and all my European and Australian sponsors for making this year all piece together. I need to also add a huge thank you to JK Williams for being 100% behind me this year.

The biggest thank you going to Leigh Hartog for allowing me to chase my dreams and know I safely have a job to come home too. To everyone involved within the company for always being so supportive and right behind my sporting career. I would also like to thank my amazing family and friends who have done all they could to make me be able to spend this season in Europe. It’s not easy on them, but they have all stuck behind me and I can’t thank them enough. This championship is there’s as much as it is mine.”

The end of season excursion will see the Team assist Andy in his first EnduroGP experience and will incorporate a visit to the Sherco factory in France.

“Just two weeks ago I was at home nursing a suspected broken tibia after a race incident in South Australia. Now here I am gearing up to race the final GP of the 2017 World Championship. Luckily my leg wasn’t broken and time in a moon boot has me back on the bike and ready to race. I’m really excited about this race and to visit the Sherco factory in France. It’s been a dream of mine to race EnduroGP. I know the tracks will be super demanding and technical. The format is also different to the majority of racing we do in Australia so I’m preparing myself for a tough, physically demanding weekend. My fitness isn’t 100% but I’m ready to go. To be racing under the CH Racing Team with Matthew Phillips is just amazing. It’ll be cool to see what it’s all about and to see how Phillips goes about his business from the inside. My main goal is to just finish the event and then hopefully, if I go okay I can crack the top 10 in my class.”

Wilksch will race a Sherco 300 SEF-R under the CH Racing Team in the Enduro Junior Class for riders under 23-years alongside fellow Australian Ben Kearns who is also racing a Sherco 300 SEF-R. Headlining the Sherco effort under CH Racing is 2017 EnduroGP World Champion, Matthew Phillips.

Rounds 15 and 16 of the 2017 EnduroGP World Championship will take place at Zschopau, Germany and will mark the end of the 2017 Championship. Racing begins with the Super Test on Friday, October 20 and racing Saturday and Sunday October 21 and 22.

As Qualifying sessions wrapped up ahead of the Final’s of the 2017 KTM Australian Junior Motocross Championship (AJMX) (Sep 30 – Oct 06) at the Horsham Motorcycle Club (HMCC) in Victoria last Wednesday.

Club president Kenny Watts was on hand with key HMCC members to present deserving junior riders with their qualifying medallions for the all important Thursday and Friday moto’s. Little were they aware however, there was other, non-competition based awards to presented. 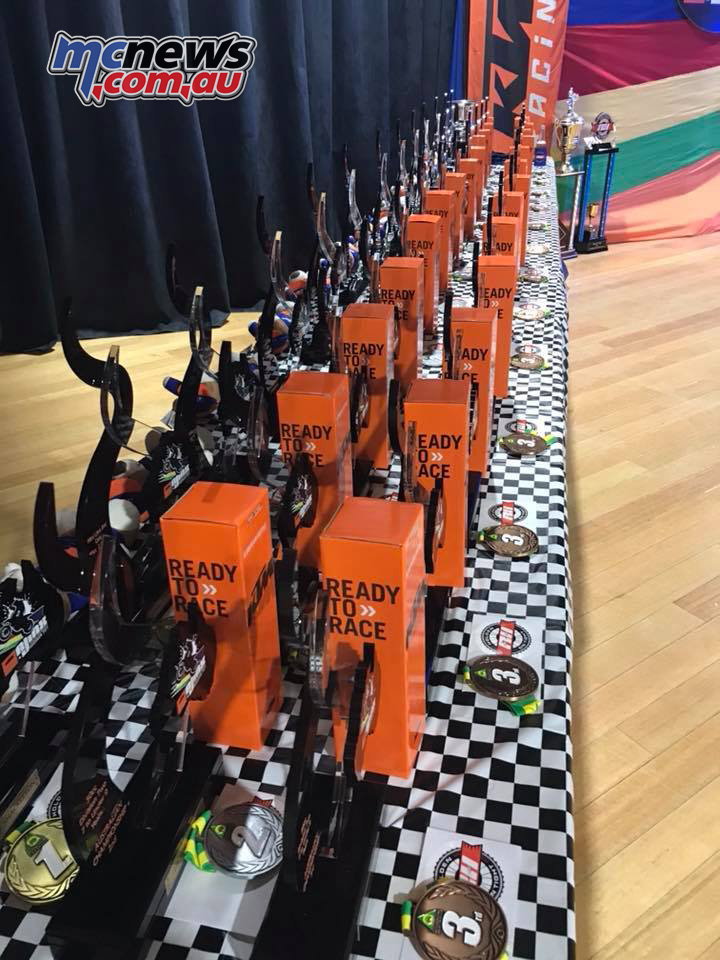 Rosco Holden, founder of the benevolent ‘Holden On Tight’ organisation, has created a brand new award for standout Junior competitors in the sport. The ‘Holden On Tight Australian Junior Sportsman Spirit Award’, was announced in unison at the MX, Enduro & Dakar Museum opening at Horsham Motorcycle Club in December 2016.

“It’s just something I’ve thought of for a while now, with everything in this modern era being centred on winning it’s nice to have an award that goes beyond the scope of just winning awards on a points based system. I’ve always been about supporting the kids and this sport. The ‘Holden on Tight Australian Junior Sportsman Spirit Award’ is designed to promote sportsmanship and humility within it and is given to any Junior rider from the ages of 6-15, from any class, who demonstrates true spirit. The award by nature is circumstantial, you never will be able to predict what act of ‘spirit’ will be shown on any given day. No one really knew the award was coming, but once I got up and explained what the Spirit Award was all about and the reasons behind it, everyone was excited about the award, the direction that we all want to go in and with the future commitments to the sport in general.”

Riding and reviewing motorcycles for sometime now, Kris writes for MCNews from time to time while also being an awesome allrounder helping to keep the sire content flowing

Todd Waters on the Husqvarna 701 Supermoto